Reliance Industries Ltd., which gets 60% of its revenue from oil refining and petrochemicals, plans to spend 600 billion rupees on four “giga factories” to make solar modules, hydrogen, fuel cells and to build a battery grid to store electricity. An additional 150 billion rupees will be invested in value chain and other partnerships, Asia’s richest man told shareholders on Thursday. 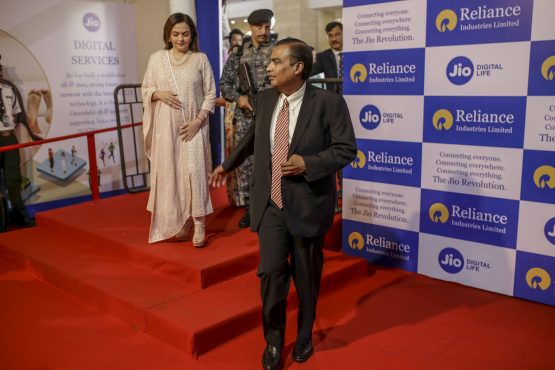 The move toward green by the Mumbai-based giant, which reported an annual revenue of $63 billion, offers a glimpse of the new order awaiting some of the world’s major fossil-fuel producers. Global giants such as Exxon Mobil Corp. and TotalEnergies SE have been under pressure to pare their carbon footprint, as governments, investors and consumers join to fight climate change and global warming.

Speaking at the company’s virtual annual meeting, Ambani gave scant details of how he would execute the plan. He was ranked No. 4 among global fossil-fuel billionaires by Bloomberg Green last year. The $10 billion in green investment over three years compares with a Fitch Ratings’ estimate — published Wednesday — of $7.4 billion in annual average capital expenditure by the Reliance group through March 2025.

Shares of the company fell 1.9% as of 9:37 a.m. in Mumbai on Friday, extending declines following their biggest loss in more than two months the previous day.

“Reliance is branching out into completely new businesses,” said Horace Chan, an energy analyst at Bloomberg Intelligence. “That raises concerns whether the investments could generate acceptable return and payback period, given the time to acquire technology know-how and seek strategic partners.”

Ambani isn’t entirely turning his back on his legacy oil and petrochemicals business. On Thursday, he said that a delayed plan to bring Saudi Arabian Oil Co. as an investor in the energy division — announced two years ago — will be finalised this year. He didn’t elaborate. In a move to reassure investors, he also said Aramco Chairman Yasir Al-Rumayyan will join the board of Reliance.

The proposed green transformation aligns with the priorities of Prime Minister Narendra Modi’s government, which has been debating aggressive climate targets that would cut net greenhouse gas emissions to zero by mid-century, a decade before China. Though fellow tycoon Gautam Adani, who built a coal-centered conglomerate of mines, ports and power plants, is already pursuing a similar path expanding his presence in wind and solar energy, Ambani’s plans are more ambitious in scope.

“The world is entering a new energy era, which is going to be highly disruptive,” said Ambani, 64. “The age of fossil fuels, which powered economic growth globally for nearly three centuries, cannot continue much longer. The huge quantities of carbon it has emitted into the environment have endangered life on Earth.”

One of Reliance’s “giga factories” will manufacture solar modules, enabling 100 gigawatts of solar energy by 2030, including on rooftop installations in villages across the country; the second involves large-scale grid batteries to store electricity, for which Reliance will collaborate with global leaders on the technology; and, the third will build and install electrolysers for separating green hydrogen from water.

“Is this doable from a standing start in nine years? It’s a stretch, it’s not impossible,” said Tim Buckley, director of energy finance studies at the Institute for Energy Economics and Financial Analysis. “There’s an element of wanting to align with the Indian government and profit in the process. Don’t forget they’ve seen Adani make a lot of money in this. It’s not altruism.”

The fourth factory would be for fuel cells, which use oxygen from the air and hydrogen to generate electricity — a technology that’s being promoted by carmakers including Hyundai Motor but famously dismissed as “mind-bogglingly stupid” by Tesla Inc.’s Elon Musk.

The announcement comes the year after India’s most valuable company raised more than $30 billion selling stakes in its technology and retail units, and through a sale of shares to existing investors. Reliance brought on board Silicon Valley giants such as Google and Facebook to help grow its digital and e-commerce footprint in a $1 trillion retail market of more than 1.3 billion people.

The investment inflows, which Ambani called “vote of confidence” in his businesses, have helped Reliance’s stock rally more than 90% since the beginning of April 2020. Ambani’s net worth is about $82 billion, according to the Bloomberg Billionaire’s Index.

The Adani-led group is also raising its game in clean energy goals. Adani Green Energy agreed last month to buy SoftBank Group’s $3.5 billion renewable power business in India, in a bid to achieve its goal of having 25 gigawatts of renewable power capacity by 2025. The green focus has led to a share rally with Adani Green jumping more than 580% and Adani Total Gas — a joint venture with TotalEnergies — by 670% since the beginning of last year.

Reliance last year set itself a target of becoming a net-zero carbon company by 2035 – a timeline shorter than the self-imposed 2050 cut-off of many of its global peers including BP Plc. and Royal Dutch Shell Plc. Ambani’s group bought its first cargo of carbon-neutral crude oil in February and said it was looking for more such partnerships.

India’s government plans to expand its renewable energy capacity nearly fivefold to 450 gigawatts by 2030, as the nation aims to reduce its dependence on coal.