BIG‘s Wildflower Production Studio has received its building permit from the Department of Buildings (DOB), indicating that the project’s construction will now commence. In late 2019, American actor, producer, and director Robert De Niro’s Wildflower Development Group and BIG revealed the first images of their 650,000 square foot (approx. 60,400 sqm) production studio design proposal, located in the Astoria neighborhood of northwest Queens, New York. Once complete, the project is set to become the first vertical commercial film, television, and creative studio in the world. 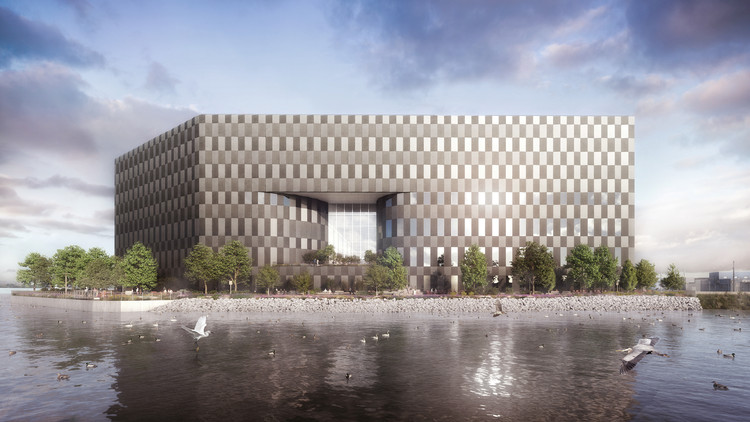 With a mission to create a “futuristic world-class content creation campus in Queens” and answer to the constant demand of large production studios in New York City, the seven-storey film, television, and creative studio complex explores streaming, AR, VR, and gaming, alongside traditional production environments. To ensure creative and dynamic workspaces that foster collaboration and connection, the interior was designed with strategically-planned interconnected spaces of both private and public functions. The structure includes 11 sound stages, 310 off-street parking spaces, and a waterfront esplanade that is open to the public. Alongside the range of stages, the project also includes production-support areas, public and private offices, fitness room, cafes, and lounges.

On the exterior, the building will be clad with angular precast concrete panels that create an animated effect following the sun’s movement through the day. Two open-air terraces are pierced into the façade, providing an outdoor connection to the waterfront and views of the Manhattan skyline, and the building’s roof will include a 150,000 square foot solar panel footprint.

BIG and Wildflower Unveil Images for Production Studio in Queens

We are excited to continue our work with Wildflower to bring film production back to New York City in a way that has never been done before. The vertical media production village will be home to storytellers working across all mediums – a three-dimensional hub of collaboration, creativity, and innovation. While New York City is no stranger to being the star of many visual stories – the city effectively a character in itself – this first ground-up vertical production stage complex marks a new chapter in the city’s ability to create the stories of our future. — Bjarke Ingels, Founder and Creative Director, BIG-Bjarke Ingels Group

The project is expected to be complete in 2023, and will provide the city with the first “deeply engaging environment for filmed entertainment content” of its kind with more than 1,000 daily union jobs. In addition to the permit, the project secured an equity investment from Meadow Partners, and a $600 million construction loan from Silverstein Capital Partners. Wildflower Studio’s partners include Adam Gordon and Matthew Dicker of Wildflower Ltd., Robert De Niro, Raphael De Niro, and Bjarke Ingels.

How Training Can Equip Research Teams to Increase Impact