Biodiversity and business: What can be learnt from the Sri Lankan tea industry 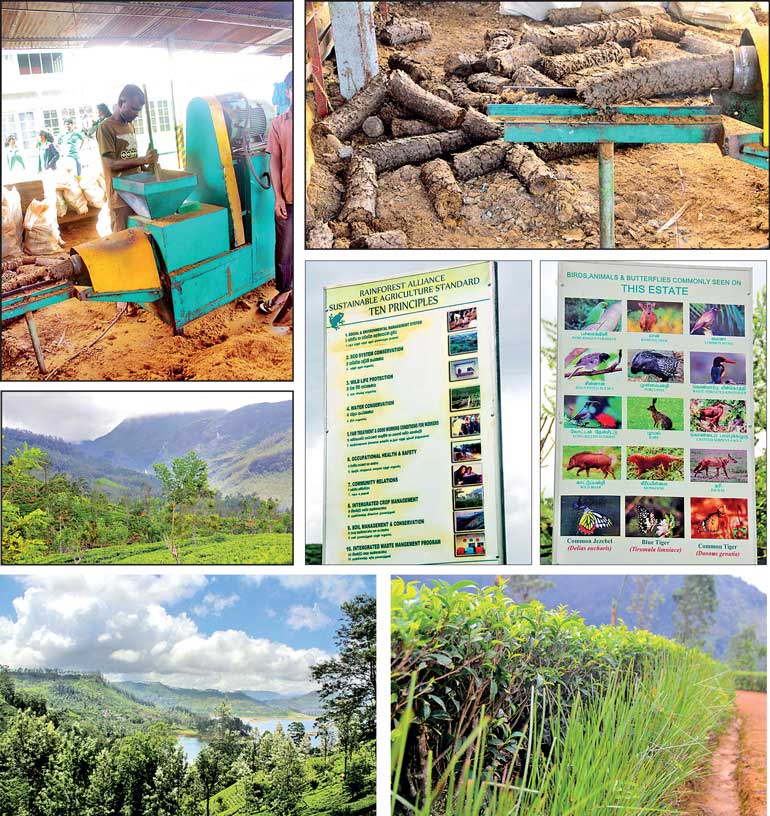 Biodiversity is considered the ‘web of life’ of all living beings in the universe. It is the link between all organisms on earth, binding each into an interdependent ecosystem in which all species play their role.

The world’s 7.6 billion people represent just 0.01% of all living things by weight, but humanity has caused the loss of 83% of all wild mammals and half of all plants.

Reduced biodiversity means millions of people face a future in which food supplies are more vulnerable to pests and disease, and fresh water is in irregular or short supply. Considering these threats, the United Nations has identified biodiversity conservation in two of its Sustainable Development Goals (SDGs). Specifically, SDG No. 14 and 15 aim to conserve biodiversity on land and below water.

Biodiversity conversation can help end the extinction of endangered species, manage ecosystems to prevent future pandemics and create a better future for generations to come. According to the World Economic Forum, more than half of the world’s Gross Domestic Product (GDP) is highly or moderately dependent on nature. The interdependence of biodiversity and business is clearly visible in economic sectors such as plantations, pharmaceuticals and food and beverages.

Biodiversity and the plantation industry

Due to its dependence on the environment and the ecosystem, biodiversity management in the plantation industry has received significant attention from different parties. Biodiversity is a highly sensitive area for the plantation industry due to its environmental impact and the reliance of the industry on the natural environment. Intensification of agriculture and the use of hazardous agrochemicals and genetically modified resources in agricultural activities have raised concerns about the ecological implications of such actions.

This, in turn, places the plantation industry in a precarious position due to its negative impact on biodiversity. For example, the oil palm plantations in Indonesia have caused the loss of mangrove, peat swamp forest, lowland forest and lower Montane forest during 2000-2010, which account for 678,668 ha of landmass. It is estimated that these impacts on the carbon balance will take at least 600 years to stabilise if the original habitat is replanted.

For a developing country like Sri Lanka, the tea plantation is one of the prominent sectors not only due to its foreign income earning capacity but also due to its impact on the natural environment. Since tea plantation companies are usually located in ecologically important open lands with sensitive ecosystems, they are responsible for managing biodiversity throughout their value chains.

Locally, governmental and non-governmental institutions have adopted several initiatives to protect the environment by implementing rules and regulations, establishing regulative authorities and imposing penalties for practices that damage biodiversity. Besides, many plantation companies have attempted to legitimise their environmental protection or sustainable practices by obtaining international accreditations and certifications in response to pressure from various stakeholders.

Biodiversity and historical developments in the tea industry

In its history of more than 2,500 years, Sri Lanka has been colonised by three European nations from the 16th century onwards; the Portuguese, Dutch, and British. The British, who occupied the whole island in 1815, pioneered the introduction of commercial level plantations to the country. They identified Sri Lankan climatic and geographical conditions as being well-suited for tea plantation. However, the establishment of plantations in the Central Highlands of Sri Lanka led to massive deforestation of the pristine mountain forests that had evolved over millions of years.

In the early years of the tea industry, biodiversity management was predominantly planned according to estate managers’ personal views. Many estate managers tended to conserve flora, fauna, and species within their territories due to the cultural and religious traditions of the country that had influenced their behaviour. To some extent, there did exist certain regulations, but they were not scrupulously enforced or monitored. Therefore, until the 1990s, the preservation of biodiversity was not widespread among tea plantation companies.

From threat to opportunity

Sri Lanka’s tea exports primarily focus on international markets, including Middle Eastern countries, Europe and Russia. Green-conscious customers in global markets are now keen to assess the environmental footprints of the products they consume. Sometimes, they are also willing to pay a premium price for environmentally accredited products. As a result, tea retailers in international markets had to produce evidence of sourcing tea from plantations that embrace environmentally-friendly practices, including biodiversity conservation. Such pressures cascaded rapidly through the tea value chain to manufacturing and plantation entities in Sri Lanka as well.

Responsible consumption decisions also enabled international retailers to charge a premium for biodiversity certified tea, and this also moved down to tea growers in Sri Lanka. These influences were clearly visible in the net sales average (NSA) prices secured at the Colombo Tea Auction, as brands with environmental certifications obtained considerably higher prices than did non-certified teas. For some international markets, certifications such as the Rainforest Alliance have gradually become entry requirements.

Furthermore, in Sri Lanka, central government and local government regulations have been tightened to conserve biodiversity and protect the environment, creating many changes in the business environments of tea plantation companies.

Due to the considerable monetary investments required to comply with regulations and obtain accreditation, tea plantation companies initially perceived sustainable tea production as a significant threat or risk. For instance, costs incurred for employee training to create awareness, modifications in commercial tea fields, and environmentally-friendly cultivation methods initially burdened these tea plantation companies. As a result, only a few plantation companies were eager to obtain green certification by changing their operational and managerial activities as specified in the biodiversity conservation guidelines.

However, in time, these companies were able to acquire considerable financial gains and access to new markets, justifying their move towards a greener and more biodiversity-friendly product. Other tea plantation companies joined the fray to embrace environmentally-friendly plantation practices and certifications by observing the benefits accruing to these first movers. Consequently, significant changes have occurred in tea plantation companies, particularly at the field level, to conserve biodiversity.

Biodiversity conservation practices of the Sri Lankan tea industry can be witnessed mainly in areas such as weed management and pest control, reforestation, water resource protection, the use of organic fertilisers and the manufacture of eco-friendly products.

For instance, a trend towards developing an integrated weed management system has drastically changed some plantation companies’ current weed control systems. Statistical records and research results evidence that Sri Lanka is a country that uses a high level of chemical fertiliser. This has resulted in many agricultural, social and ecological issues. The new integrated approach uses slashing and manual weeding by saying no to glyphosate (a herbicide commonly used in tea estates for weed management).

These practices have led to reduced water pollution while simultaneously improving organic matter in the soil. They also provide better health and safety conditions for workers while improving final product quality to end consumers.

The modern ‘integrated’ pest management practices are mostly organic approaches where companies use the natural ecosystem services in controlling pests with reduced synthetic chemicals. In addition, some companies have created forestry patches within their boundaries to improve the habitat for birds. The increased bird population assists the company in controlling pests, and this service is absolutely free. Not only do these practices improve a company’s bottom line, they also reduce its environmental footprint.

Tree plantation programs are one of the initiatives promoted by many companies in their bid to conserve biodiversity. This initiative contributes to the conservation of biodiversity in three main ways. Firstly, this results in increasing the native tree population in the Central Highlands. The re-planted trees are mainly endangered native trees and will, therefore, assist in managing pristine trees as well. Secondly, and consequently, this practice increases water catchment areas. Thirdly, these replanted tree areas act as a buffer zone between tea estates and natural forests to limit the harmful effects of chemicals and inorganic fertiliser usage.

Most commercial plantations use fertiliser as a prominent factor in increasing yield. In the past, inorganic fertilisers supplied by head offices were popular among estates. Nonetheless, over the last few years, some estates have switched to organic fertilisers produced on the estate premises. These organic fertilisers, including slashed weeds, organic waste, over-fired tea, and oven wastes, are a few of the alternative, environmentally-friendly solutions created by estate managers.

Although the proportion of organic fertiliser made through these means is relatively small, it has encouraged planters to seek sustainable supply chains alternatives. Moreover, in light of the Government’s recent policy decision to ban chemical fertilisers, organic fertiliser production on estates can offer a viable alternative solution.

Internationally, the demand for organic teas has grown, as consumers become more health-conscious and prioritise environmental protection. These trends in the global market have led tea plantations to focus on manufacturing organic herbal tea varieties for both local and foreign markets. This has created a positive impact on biodiversity conservation.

Traditionally, in tea plantation companies, organisational structures were arranged to facilitate operational and administrative tasks of the estates and the head office. However, many companies have now established separate departments to oversee environmental practices and comply with local regulations and certification guidelines. While some companies have established separate departments for compliance, others have added such responsibilities into the line manager’s day-to-day job role. Therefore, an apparent change in the organisational structure for biodiversity management is taking place in plantation companies.

An emerging trend that many large tea plantation companies have embraced are internal green reporting systems. These systems accurately capture and report management-focused efforts and provide relevant information to guide decision making based on environmental indicators. Many companies use this information when preparing sustainability and integrated annual reports. On the other hand, companies also use product packaging as another means of communicating and promoting their environmentally-friendly practices.

Conventionally, it has been presumed that there is no correlation between biodiversity conservation and business performance. However, current evidence reveals that many benefits can be obtained when tea planters adopt suitable initiatives for biodiversity conservation. For instance, these practices make companies more legitimate, ultimately creating access to better markets and prices.

On the other hand, these practices allow planters to develop new and more pristine products that can demand higher prices. This is due, primarily, to positive trends in global markets towards eco and biodiversity-friendly products. Organic fertiliser usage and integrated pest control and weed management systems also lead to considerable cost savings for tea companies. Furthermore, these biodiversity-friendly practices improve employee safety through reduced exposure to hazardous chemicals and herbicides.

Sustainable development is a journey that requires the support of many stakeholders, including individuals, corporates, NGOs and governments. The biodiversity management practices of tea plantation companies demonstrate clearly how a winning strategy could be crafted while meeting different stakeholder interests.

(Upekha Atupola graduated in accounting from University of Sri Jayewardenepura. He currently works as a freelance researcher while reading for his PhD at University of Colombo. Upekha is also an Associate Member of Chartered Institute of Management Accountants (CIMA) UK.)

(Dr. Nuwan Gunarathne, PhD, is a Senior Lecturer at University of Sri Jayewardenepura. His research focuses on corporate sustainability, sustainability accounting, integrated reporting and waste management in developing countries. He has published widely in national and international journals. Nuwan is also a committee member of the Environmental and Sustainability Management Accounting Network (EMAN) Asia Pacific (AP) and country representative of the Sri Lanka Chapter of EMAN-AP.)

The independent news website of The Kent Stater and TV2