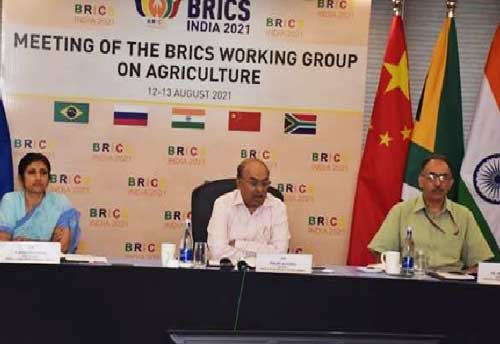 New Delhi, Aug 16 (KNN) The BRICS nations have pitched in for closer ties in strengthening ‘Agro Biodiversity for food and nutrition security’, the government said.

While discussing the issue virtually on August 12-13, top officials of Britain, Russia, India, China and South Africa deliberated on the theme “BRICS Partnership for Strengthening Agro Biodiversity for Food and Nutrition Security”.

The Joint declaration of the eleventh meeting of BRICS and Action Plan for 2021-24 for agricultural cooperation of BRICS countries and BRICS Agriculture Research Platform were discussed in depth.

This BRICS Working Group meeting will endorse the Action Plan of 2021-24 for adoption in BRICS meeting.

”The group stressed on having closer ties in strengthening cooperation and research in the field of agriculture,” an official statement said on Saturday.

The BRICS Agriculture Research Platform has been developed by India to promote cooperation in the areas of agricultural research, extension, technology transfer, training and capacity building.

”The intention to make the BRICS Agriculture Research Platform functional and encourage research cooperation to improve the use and application of agricultural technologies for meeting the needs of producers and processors was also expressed,” the statement added.

Festival of Urbanism 2021 – The University of Sydney