A growing number of businesses in the Middle East are upping their sustainability expectations, according to Knight Frank analysis, sending a clear signal to their landlords – “Green your real estate or risk losing a tenant.”

Knight Frank surveyed almost 400 businesses around the world, including leaders in the Middle East, to gauge the sentiment towards sustainability in the real estate scene. In line with global developments, there is broad consensus in the region that climate change is increasingly a factor of importance and relevance in real estate decision-making.

“Three-quarters of businesses in the Middle East say that their real estate choices in the future will be influenced by their net zero targets,” explained Faisal Durrani, Head of Middle East research at Knight Frank. According to Durrani, the acceleration of the ‘green agenda’ builds on two major developments: the global climate crisis unfolding and changing behaviours triggered by the Covid-19 pandemic.

Globally, 40% of the surveyed companies have set a net zero carbon target and, of those, 77% are aiming to achieve this by 2030. The issue however lies in the supply of ‘green buildings’, with nearly nine out of ten respondents believing that less than half of their current global real estate portfolios are either ‘green’ or ‘sustainable’.

For executives, realising these ambitions will require “a major shift in real estate strategy” said Durrani. Meanwhile, the message to landlords is “loud and clear: green credentials of buildings will become a key battleground in post-Covid economy.”

“For landlords across the region, the big question will be around weighing up the cost-benefits of greenifying their portfolios in order to cater to evolving business expectations. As investors and businesses are increasingly factoring the green credentials of a building in their decision making, it’s clear that the saleability and lettability of non-green-rated buildings will be negatively impacted over the medium to long-term.” 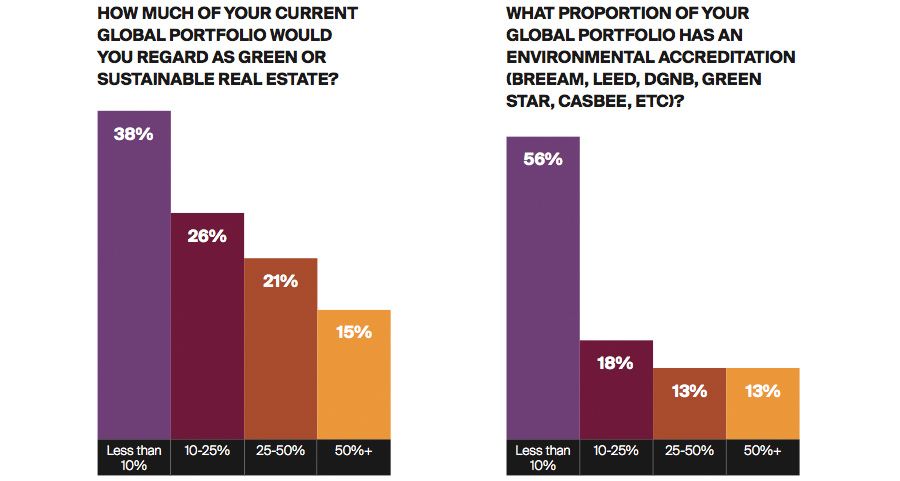 Knight Frank’s database of real estate and CO2 footprint shows that some of the region’s office landscapes are better prepared for the transition than others. The UAE for example is classified as ‘relatively well prepared’, the emirate is currently home to 869 green-rated buildings, the 14th highest national concentration globally and only Middle East country in the region in the top 30.

Durrani added, “Developers and landlords in the Middle East have made great strides in delivering world-leading green buildings, incorporating stunning technologies, such as the condensation harvesting system on the Burj Khalifa, or the three integrated wind-turbines on the Bahrain World Trade Centre, but such technologies need to be adopted more widely if landlords are to compete on a level playing field for increasingly green conscious businesses.”