Oilsands developers made a collective vow on Wednesday to achieve net-zero greenhouse gas (GHG) emissions by 2050, without sacrificing thermal production that stands out as the top Canadian natural gas consumer. 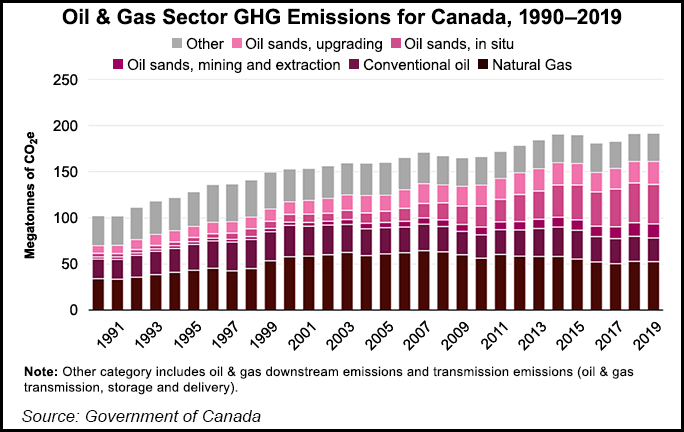 Carbon capture, utilization and storage (CCUS) tops the cleanup agenda. The group said its anchor plan would be a “CCUS trunkline connected to a carbon sequestration hub to enable multi-sector ‘tie-in’ projects for expanded emissions reductions.”

The northern Alberta oilsands cleanup proposed by the producer group would tackle a far larger GHG load of about 70 million tons/year, or nearly 10% of total Canadian emissions.

The “initiative is ambitious and will require significant investment on the part of both industry and government to advance the research and development of new and emerging technologies,” said the coalition.

The coalition has set its sights on “realistic and workable solutions to the challenge of climate change” that fulfill Canadian commitments to global carbon cleanup agreements without damaging the national economy.

“The oilsands industry is a significant source of GHG emissions and the initiative will develop an actionable approach to address those emissions, while also preserving the more than C$3 trillion [$2.4 trillion] in estimated oilsands contributions to Canada’s gross domestic product over the next 30 years,” it said.

Along with CCUS, the oilsands producers committed to examining newer technologies such as hydrogen replacement of fossil fuels, small atomic power reactors and direct air capture.

The initiative is needed “to ensure Canada takes its place as a leading supplier of responsibly produced oil,” the group said.

“While alternative energy sources will play an increasingly important role in the decades ahead, all internationally recognized forecasts indicate fossil fuels will continue to be an essential requirement through 2050 and beyond as part of a diversified energy mix, including as a feedstock for carbon fibers, asphalt, plastics and other important products.”

BMO Capital Markets analysts called the initiative “as a meaningful step forward in defining a credible pathway to the net-zero commitments of producers.” Achieving net-zero emissions “is attainable given several unique sustainability advantages of oilsands operations, including the concentrated nature of emissions and compatibility with carbon capture.”

Analysts also cited how the firms are collaborating, as well as their leading research and development arms.

“We remind investors that Western Canada holds vast carbon storage resources,” which are estimated at more than 400 gigatons and already extensively derisked. Alberta’s storage reflects more than 30 times the sector’s projected emissions to 2050, according to BMO analysts.

“We believe Alberta’s carbon management expertise and infrastructure will play an important role in the success of this initiative.”