The humbling of ExxonMobil by activist investors who voted outside directors on to the board to accelerate the oil company’s response to climate change raised activism to new, unexpected heights last month. Around the world institutional investors have been ramping up stewardship efforts across their portfolios, with an increasing focus on the transition to net zero greenhouse gas emissions by 2050.

Yet the high tide of activism has yet to touch one group of very big public investors — namely the central banks that have accumulated large portfolios of securities since the financial crisis and topped them up in response to the coronavirus pandemic.

Among the leading central banks only the Bank of Japan is a really significant force in its domestic equity market, owning around 10 per cent of Japan’s benchmark Topix index. At some leading Japanese companies it owns as much as a third of the free-floating shares. Jesper Koll, a senior adviser at exchange traded fund specialist WisdomTree in Tokyo, points out that these stakes are huge but mute. The BoJ, he says, will never raise its voice at annual shareholders’ meetings.

The central bank is thus running counter to one of the government’s important policy objectives: improved corporate governance. It is, says Koll, an experiment in financial socialism.

At other big central banks such as the Federal Reserve, the European Central Bank and the Bank of England, corporate bond holdings are the chief focus of climate change concerns. Most of these purchases were undertaken to help drive down long-term interest rates and to compress risk premia — the reward for holding longer dated IOUs — with a view to easing financial conditions while increasing inflation. They raise important questions about stewardship.

Central bankers are instinctively wary of intervention in the corporate sector. They do not want to be seen to favour one group of borrowers over another. So their bond holdings tend to be allocated across sectors of the economy according to the amount of debt outstanding in each sector. This minimises the impact of bond buying on relative borrowing costs across sectors with a view to achieving market neutrality. 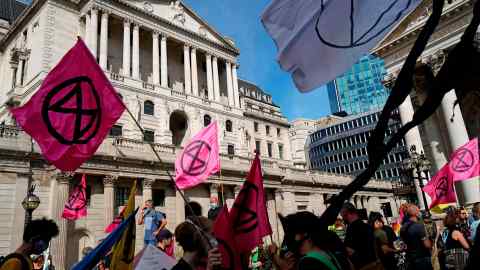 Yet Andrew Bailey, governor of the Bank of England, pointed out in a speech last week that there is increasingly persuasive evidence that climate risk is systematically underpriced in financial markets. So “continuing to replicate the structure of the sterling corporate bond market without taking explicit account of the climate impact of bond issuers is no longer in fact a truly ‘market neutral’ approach”.

It is in the BoE’s Monetary Policy Committee remit to consider how, subject to achieving its inflation target, it could support the transition of the UK economy to net zero emissions. As part of this it is proposing to change the composition of its corporate bond portfolio while incentivising companies to take action to secure an orderly transition to a net-zero economy.

This will involve portfolio targets for emissions. The Bank will also aim to purchase green corporate bonds and will consider excluding issuers involved in activities judged incompatible with transition to net zero. Another strategy will be to tilt the portfolio towards issuers with stronger relative performance in pursuing the goal of net zero. Action will be escalated to incorporate more stringent requirements for issuers who do not meet them.

How effective this will be is moot. The Bank of England’s portfolio is £20bn, or just 6.5 per cent of the sterling corporate bond market. But it hopes that its example will influence other larger investors. In bond markets, unlike equity markets, the investor’s leverage with the investee company diminishes once the money passes to the borrower. So there is a risk that portfolio companies may prove resistant to the Bank’s moral suasion.

Then there is a wider question about mission creep and whether this and other measures central banks take to recognise the impact of climate change could distract them from their core objectives relating to inflation and employment.

Sir Paul Tucker, a former deputy governor of the Bank, recently told a House of Lords select committee: “One thing that is said about climate change and central banking is that climate change could be very bad for financial stability, and I agree. Wars are very bad for financial stability, too, including civil wars. Should central banks ration the provision of credit to suppliers of arms manufacturers?”

It is a powerful rhetorical question.