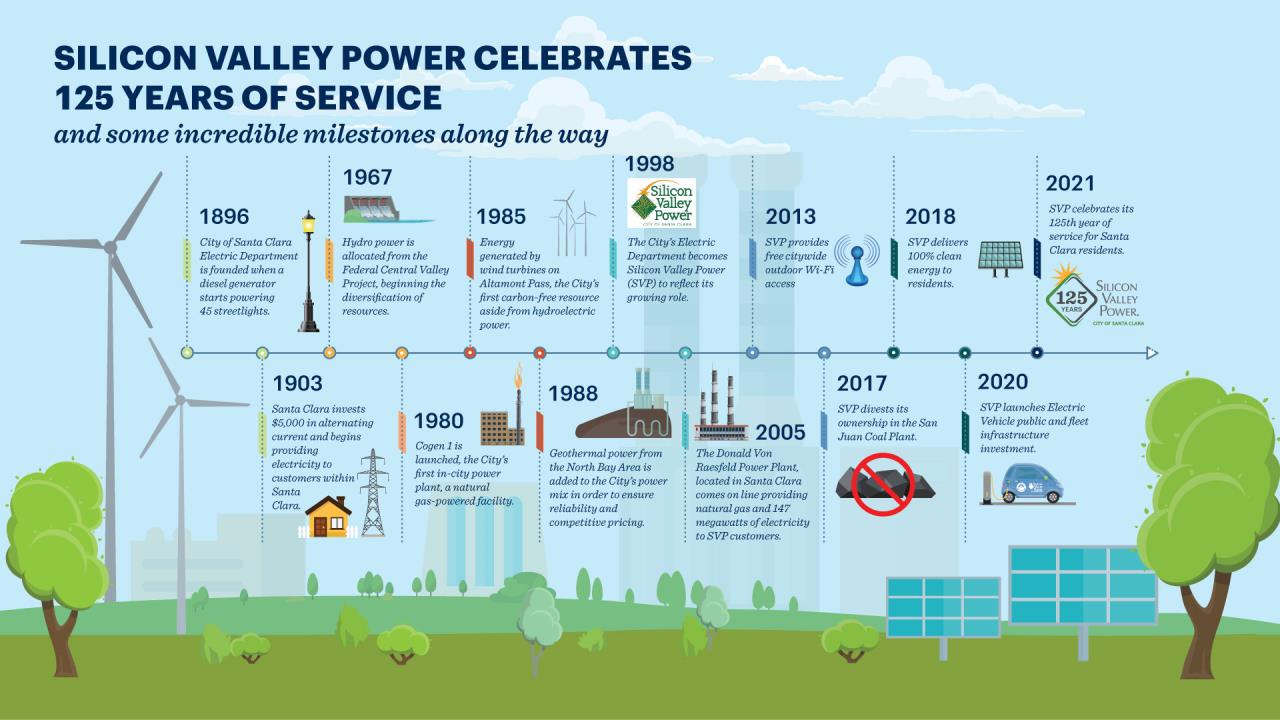 Today, SVP has grown from 46 streetlights in 1896 to 8,122 today, and it now serves more than 58,700 electric customers. SVP owns, operates and outsources more than 1,000 Megawatts (MW) of electric generating resources and delivers a peak load of approximately 600 MW.

Since 1965, SVP has diversified its portfolio of generation resources by fuel type and geographic location, and is working on adding an additional 500 MW of clean energy to its portfolio in the next five years. As SVP moves toward carbon-free electricity in 2045, its new generation investments are entirely in clean energy. SVP’s mission to customers stems from its humble beginnings: We are dedicated to our community, customers, and employees. We provide safe, reliable, affordable, and sustainable energy services with exceptional customer focus.

About the City of Santa Clara

Located at the heart of Silicon Valley, about 45 miles south of San Francisco, the City of Santa Clara truly is “The Center of What’s Possible.” Incorporated in 1852, Santa Clara covers an area of 19.3 square miles with a population of 129,498. Santa Clara is home to an extraordinary array of high-tech companies, including Applied Materials, Intel, Nvidia, Oracle, and Ericsson. The City of Santa Clara is also home to Santa Clara University, California’s Great America Theme Park, and Levi’s® Stadium, home of the San Francisco 49ers and Super Bowl 50. For more information, visit  SantaClaraCA.gov.

Silicon Valley Power (SVP) is the trademark adopted for use by the not-for-profit electric municipal utility of Santa Clara, CA, serving residents and businesses for over 120 years. SVP provides power to nearly 55,000 customers, at rates 25 to 48 percent below neighboring communities. SVP is the only full service, vertically integrated publicly owned utility in Silicon Valley owning generation, transmission and distribution assets. See more at: SiliconValleyPower.com.

Houston’s diesel-dependent Metro, which has zero e-buses, will buy 20

Houston's diesel-dependent Metro, which has zero e-buses, will buy 20