Climate change, migration: How Merkel’s successors measure up | Germany| News and in-depth reporting from Berlin and beyond | DW


In September 2021, Germany will elect a new federal parliament, and change chancellors as well. Three major parties have put up candidates hoping to succeed Angela Merkel, who will not run again after 16 years in office.

Merkel’s own party, the Christian Democrats (CDU), nominated Armin Laschet for the candidacy. Laschet serves as state premier of North Rhine-Westphalia, Germany’s most populous state. The Greens, meanwhile, made 40-year-old international law expert Annalena Baerbock their candidate, the party’s first candidacy with real prospects of success. The Social Democrats (SPD) tipped Finance Minister Olaf Scholz as their top candidate. With the party at around 20% in the polls, Scholz is currently deemed unlikely to win the chancellorship.

Voting records provide an overview of how the governing parties have implemented their promises and how the opposition parties have positioned themselves politically.

In Germany, several parties usually form a majority coalition that votes unanimously, and whose motions will thus generally pass. Much depends, therefore, on the formation of the next coalition, and the deals struck in the process. For most of her time in office, Merkel oversaw a “grand coalition” of CDU/CSU and SPD, with the Greens in the opposition.

Should the SPD go into opposition after this election, it could cast its vote separately from the conservatives for the first time since 2013. And should the greens become a government party, they will have to compromise with their coalition partners.

So, what is each candidate’s track record so far? And what does that tell us about Germany’s future chancellor? To find the politicians’ signature issues, DW assessed the words and phrases each of the candidates use more often than their competitors in parliamentary speeches.

Whether issues and policy positions of politicians are put into practice is partly decided in the federal and state parliaments. Here, political positions are discussed and new laws voted on. DW gathered all roll-call votes the candidates and Merkel participated in, recorded by the German parliamentary watchdog NGO Abgeordnetenwatch, and manually labeled them by international relevance and policy issue. What is their track record on migration, environmental policy, or European cooperation?

Merkel’s decision not to close the borders to refugees stranded in Hungary in 2015 was watched around the world. Overall, however, the chancellor’s voting record on migration and refugee policy is rather mixed. Less than a quarter of her votes support a more open migration policy. Instead, her governing coalition voted, for example, against deportation stops for Syrian refugees, which the Greens had requested in 2011, or introduced a motion to classify Algeria, Morocco, Tunisia and Georgia as safe countries of origin in 2019. 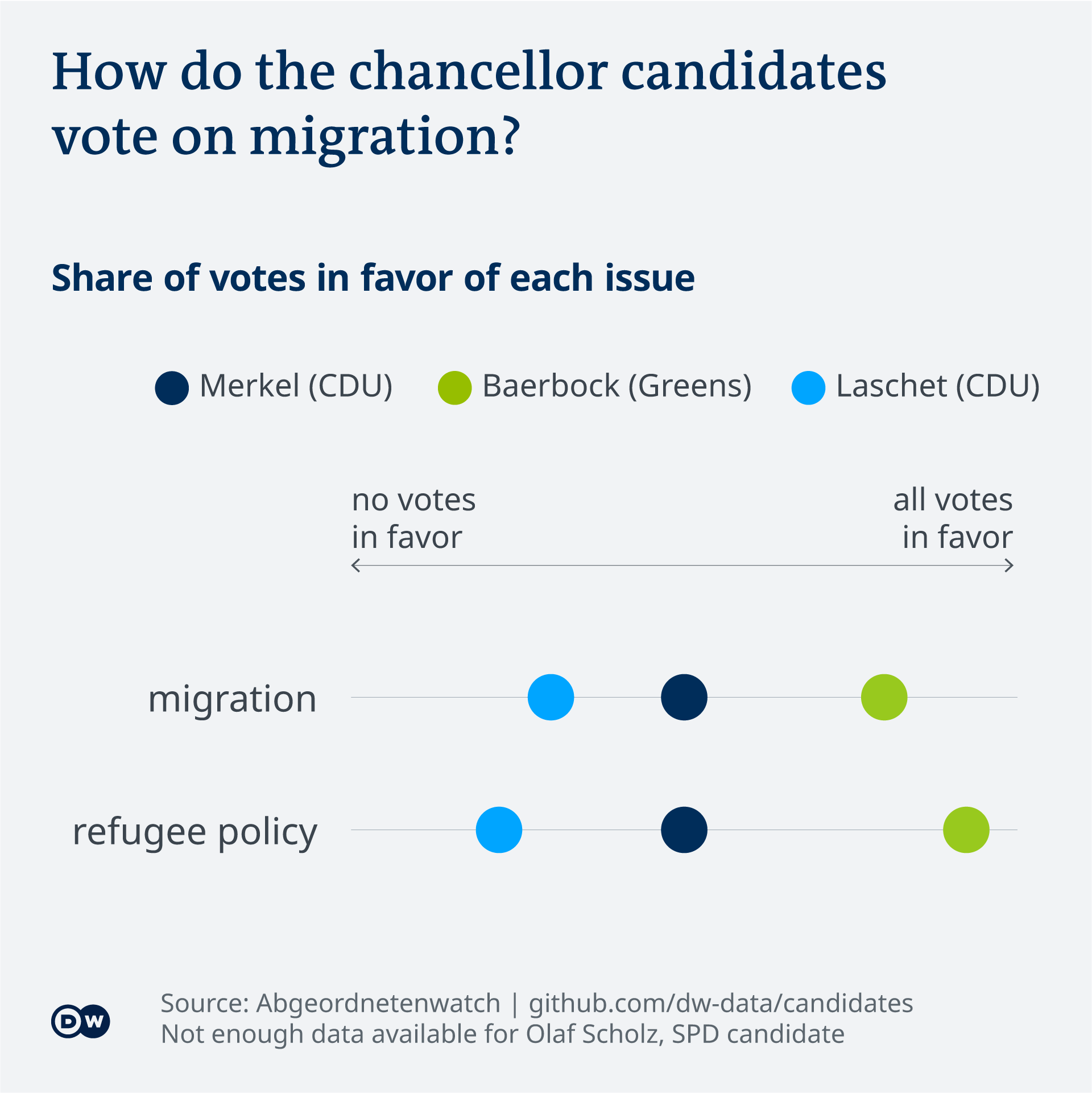 Political calculations play a big role in such votes, says Ulrich Sieberer, professor of empirical political science at the University of Bamberg: “99% of the time, votes are about positioning yourself in the conflict between government and opposition.”

Opposition parties like the Greens can introduce motions to parliament, but these have no chance of success without the support of the governing coalition. But they still serve a purpose, says Sieberer: “From the opposition’s point of view, it’s an instrument to present one’s own position to the voters, and to show up the government by occasionally forcing them to reject something popular.”

The SPD knows this dynamic well: They often face accusations of voting against their proclaimed ideals as the CDU’s coalition partner. “At the end of the day, the parties stand together for the government line and, of course, have to be measured against it to some extent,” says Sieberer. “But at the same time, of course, the battle over interpretation begins immediately.” Parties might claim to have wanted a different outcome, but to have been forced to make concessions to the coalition partner.

The Greens could be in that very position after the election. If the SPD remains where it is, a black-green coalition, consisting of the CDU, its sister party CSU and the Greens, would be likely. It is unclear who will become the strongest force and thus provide the chancellor. Either way: As part of a government coalition, the Greens would have to vote differently. “They will only introduce motions that are sure to have the support of the coalition,” says Sieberer.

As an opposition party, the Greens have often introduced motions deemed too extreme by the governing parties. Among them are multiple requests for Germany to take in more refugees and asylum-seekers, including a motion from March 2020 to admit some 5,000 people from overcrowded Greek camps.

Baerbock and her party vote for more immigration and a more open refugee policy in almost all cases.

Little data on Scholz and Laschet

By contrast, the SPD’s Scholz and the CDU’s Laschet have a relatively thin voting record on the topic. Publicly, the SPD politicianspoke out in favor of accepting more refugees from Moria after fires destroyed the Greek camp in 2020. When large numbers of refugees arrived in Germany during 2015 and 2016, he pleaded for more European cooperation and faster processing procedures for asylum applications, but also advocated for stricter controls at the EU borders and more stringent deportation procedures.

For Laschet, only two roll-call votes on the topic are recorded, both on opposition motions in state parliament. Generally, the CDU politician and former integration minister for North Rhine-Westphalia is seen as astaunch supporter of a multicultural society, and in 2015, he backed Merkel’s open refugee policy in the face of criticism. As Merkel’s policy got stricter, though, so did his.

German soldiers are currently deployed on a total of 12 missions around the world. These are generally decided on by the government, but most must be approved by parliament. 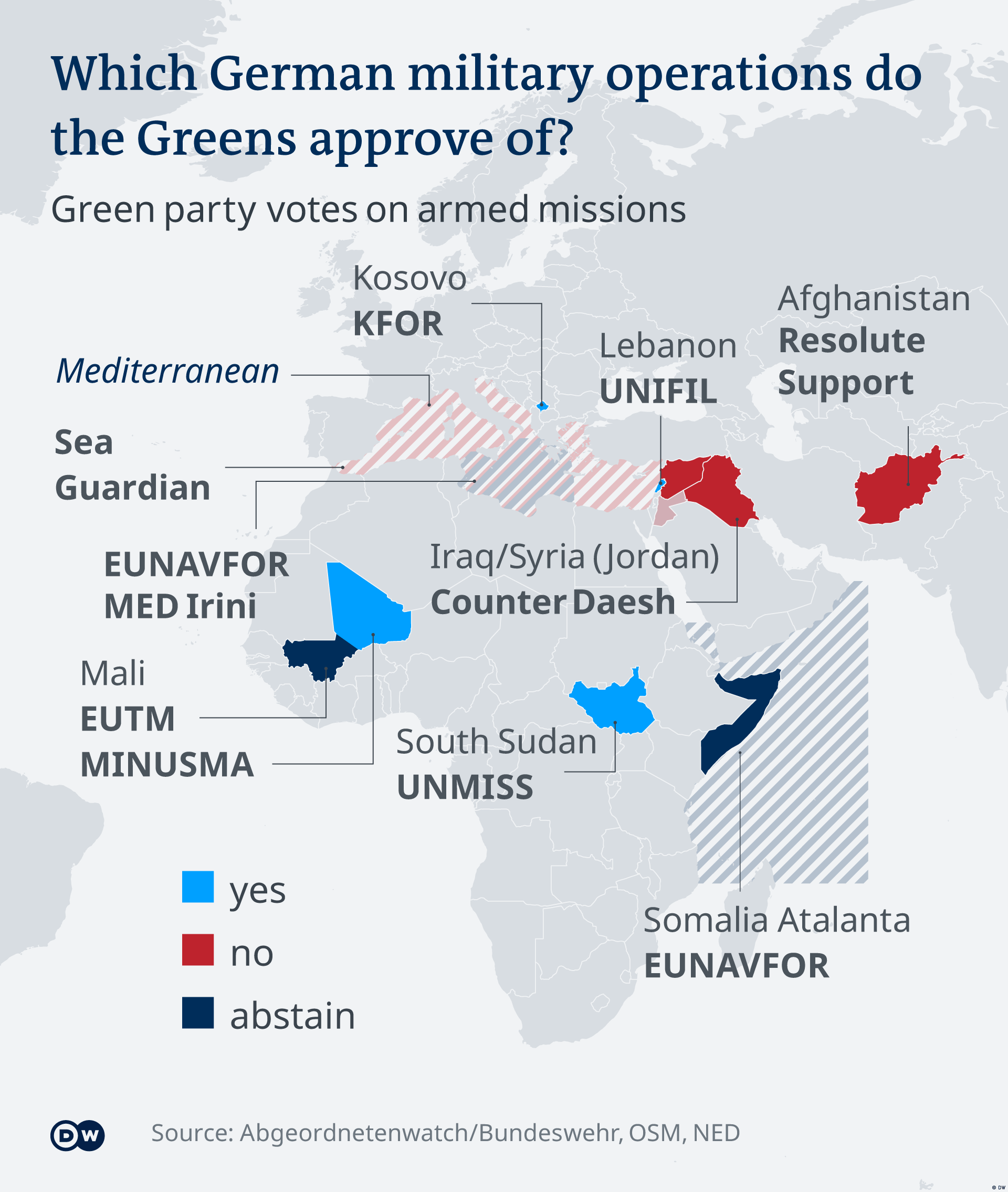 The Greens, as part of the opposition, have supported only some of these missions. For example, Baerbock has always voted along party lines against German military involvement in NATO’s Sea Guardian operation, which is meant to ensure security in the Mediterranean, and against the missions in Iraq and Syria. Other missions have the support of the Greens, however, such as those in North Africa and Lebanon.

Environmental policy is the key issue for the Greens. During Baerbock’s time in the Bundestag, the Greens have repeatedly introduced motions on the topic, such as a fundamental ban on fracking, as well as an exit from coal by 2022. 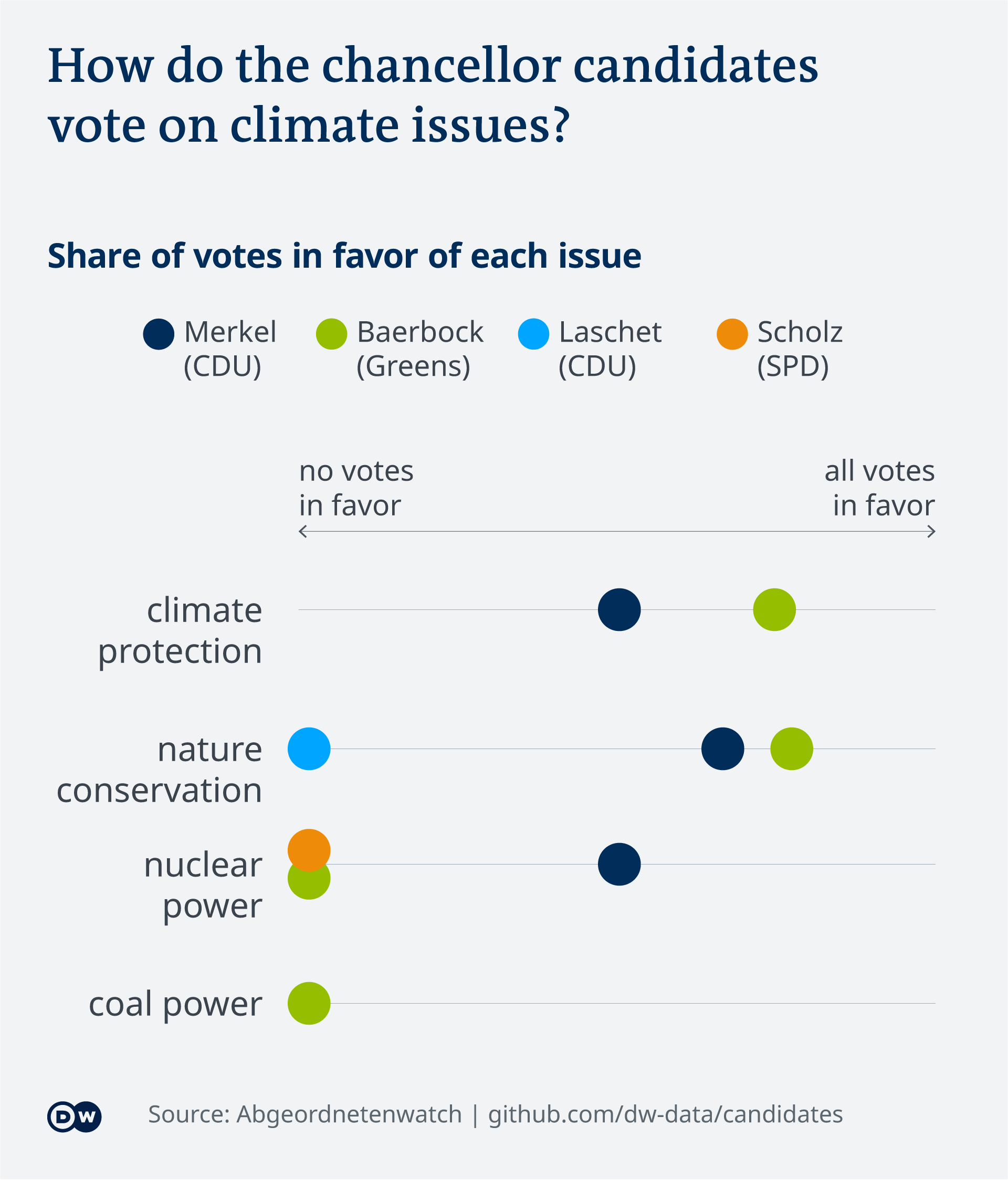 Many of these motions have little chance of success and serve primarily to position themselves politically, Sieberer explains. But the Greens also generally support government motions that strengthen climate policy and nature conservation, except for protest votes on motions they deem insufficient.

Repeatedly rejecting opposition motions drags down Merkel’s own track record on climate policy. Still, Merkel and her ruling coalition support more than half of all motions for more climate and nature protection. Her government has helped introduce and implement some environmental policy decisions in recent years, such as theclimate protection program 2030 and an increase in aviation tax rates. But she and her party also voted, for example, to cut solar power subsidies.

Once again, there is less data on Laschet and Scholz, who more often vote on regional issues in state parliament.

In his few roll-call votes on environmental issues, Laschet has voted against motions on animal welfare andenvironmental protection. In public, Laschet is often hesitant in his support of climate policies. In his home state, coal still plays a major role. This may be one reason the CDU candidate always emphasizes the importance of industry and economy when talking about climate protection.

Motions on European cooperation are usually introduced by the governing coalition and therefore mostly pass. On this issue, the Greens introduce fewer motions themselves, but support the CDU/CSU and their coalition partners in motions ranging from financial aid for Greece to the start of EU accession talks with Albania in 2019 to participation in the EU’s pandemic crisis support in 2020.

Being in the opposition, the Greens have agreed with the governing coalition surprisingly often in the past years, Sieberer notes: “It seems a bit like they’re preparing for possible future government participation. You can’t disagree with everything if you want to govern together with the same people later.”