Devastating drought and wildfires in the US, deadly floods killing hundreds in Germany and China, flash floods in Singapore…

While you are understandably preoccupied with the Covid-19 pandemic, a more insidious “slow kill” is occurring — increasingly current, urgent, but possibly underestimated or ignored.

You have been careful about Covid-19 safety measures but what are you doing to mitigate climate change?

“I don’t care about climate change”, “It’s too late”, “I’m just one person and I can’t fix this alone”, are some of the reactions in a straw poll by SPH ContentSTudio.

Yet increasingly frequent and devastating disasters are proof that the planet is inching towards the danger zone.

“We are now observing climate change with our own eyes in ways we did not broadly before,” said Professor Corinne Le Quere, a climate scientist at the University of East Anglia and an author of the upcoming assessment by the United Nations’ Intergovernmental Panel on Climate Change (IPCC), on Tuesday.

The IPCC report, due out on Aug 9, is likely to report that scientists are convinced that human activities are driving most climate change, up from “extremely likely” in the last flagship report in 2013.

In the last fortnight alone, drought, wildfires and the resulting haze devastated parts of the US and Canada, more than 170 were killed by floods in Germany, while 33 people died and 400,000 were displaced by flooding caused by sudden torrential rains in China’s Henan province last Saturday.

Still cynical about how you can help build a sustainable city? 5 things you need to know to keep our planet alive.

Q: Isn’t it up to governments and corporations? What can individuals do?

Yes, 70 per cent of the world’s greenhouse gas emissions can be traced back to 100 companies, a 2017 report by the Climate Accountability Institute in the US found. The institute’s co-founder Richard Heede suggests “global emissions attributable to or savable by an individual” may not be enough to halt climate change.

But consumers, which include households and corporations, burn and demand the fossil fuels that these companies provide, Heede says in an interview with American media outlet Vox.

Q: How will it impact my money and my life?

“The economic impact would be as significant as, but opposite to that of Suez Canal’s opening in 1869 (by which Singapore prospered), he says.

“The melting of Arctic Ocean’s ice could cause an ice-free sea lane to open every future summer, if not permanently. This would be a shortcut between East Asia and Europe, by-passing the traditional shipping route through the Strait of Malacca.”

“We could also see rising costs for utilities and other products and services as a result of carbon tax being passed on to consumers, higher home insurance premiums for at-risk zones, as well as increased food costs as supplies become affected by the changing climate,” he says.

“Therefore, it makes good commercial sense to get economies, businesses and ourselves ready for the demands of a more sustainable future.”

Closer to home, erosion of our shores and flooding are very real threats. Your home at Marine Parade, or your favourite food centre at East Coast Park, risks being under water.

PUB expects sea levels to rise by over a metre by 2100.

“The effects of rising seas, caused by climate change, will certainly be catastrophic. And if not prepared for, will surely devastate Singapore,” said PUB chief executive Ng Joo Hee in March last year.

Added Mr Ng: “The Prime Minister has made it quite clear that sea-level rise poses nothing less than an existential challenge for our island country. The challenge will also be a persistent one. We will never win. But we have to make sure we do not lose.” 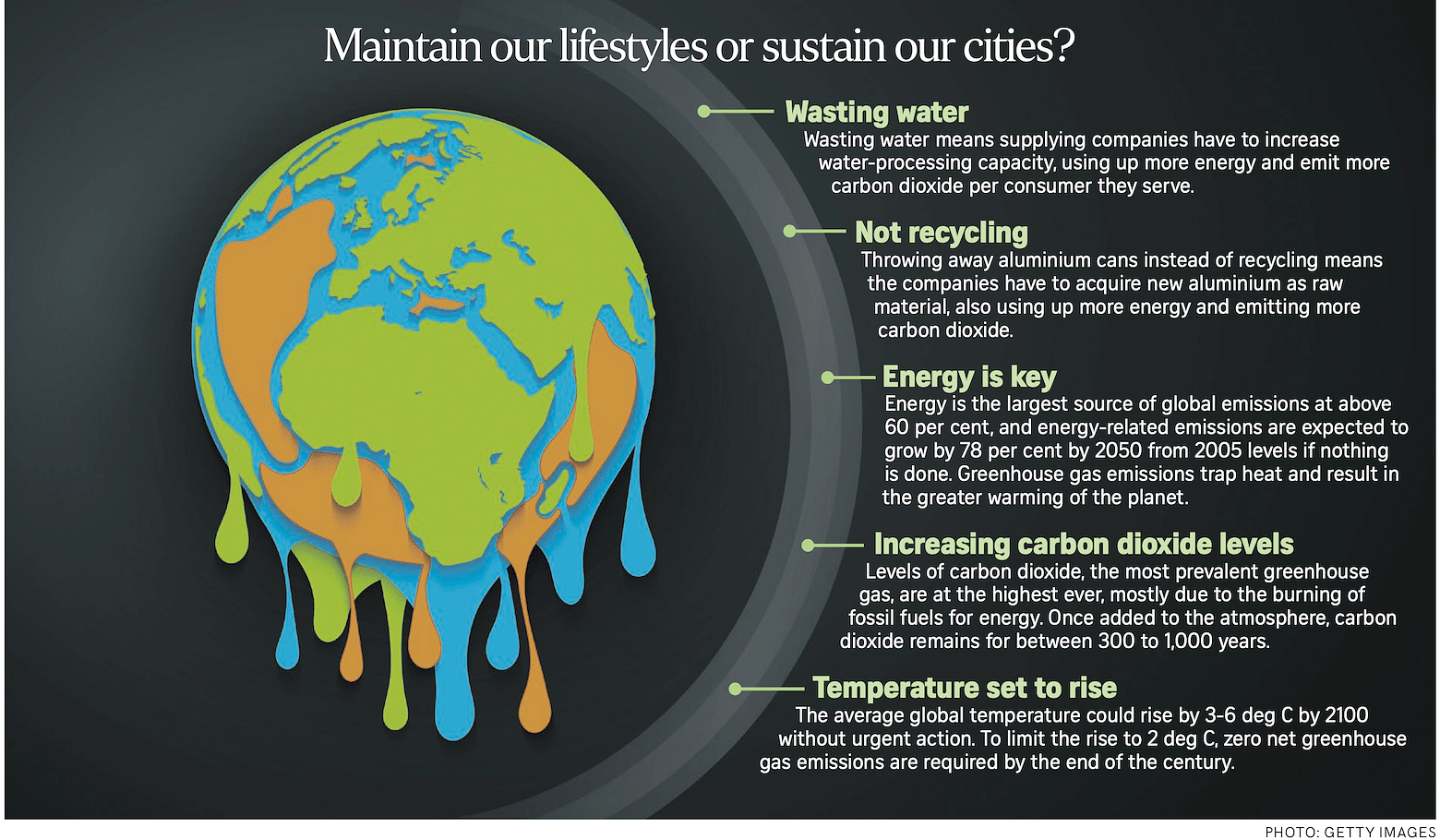 Q: Whose fault is it?

Climate Accountability Institute co-founder Heede says that while companies are mostly responsible for the crisis, individuals, households, and corporations must shoulder their share of the blame.

“What the companies do is produce the fuels, extract and market the fuels, so that we can use them. It’s the consumers that produce the carbon dioxide: They may be corporations, airlines, shipping lines, households, utilities. It’s all distributed.”

Assoc Prof Koh feels there are two kinds of climate action: Individual acts and coordinated measures taken as a society.

Giving an example of individual action, he points to the use of single-use plastic. He says it should be used only when necessary, such as with disposable cutlery and containers that come with takeaway food.

These single-use plastics, he says, are incinerated when disposed of, and their carbon is derived from petroleum and released as carbon dioxide when burnt.

As for coordinated measures, including the switch to electric cars instead of combustion-engine cars, he says: “In Singapore, electricity is generated by burning natural gas. While natural gas has a lower carbon footprint than coal per unit energy output, it is still converted to carbon dioxide at the power plant.

“This means the use of electric vehicles in society must progress in tandem with the switch-over to renewable energy sources for Singapore to meet its 2050 targets under the 2015 Paris Agreement.

“Therefore, a driver who opts for an electric car to protect the environment still needs to pay attention to how the electricity is sourced.”

Q: Is there hope or are we helpless?

UOB’s Mr Lim is optimistic about individual action helping fight climate change. “While it is true that governments and companies, with their sheer size and scale, will make a more significant impact on climate action, individuals can also contribute their efforts in their capacity as a customer and investor.

“Taken as a whole, individuals are likely the most important part of the solution due to the pressure they can exert on governments and corporations.”

The rolling green roof of this modern art museum was built with to merge art preservation with futuristic technology!

The rolling green roof of this modern art museum was built with to merge art preservation with futuristic technology!