The Crown Estate has added £1bn to the value of its portfolio in the last year thanks to a boom in offshore wind, the clearest indication yet that the monarch’s property company is set to benefit substantially from the UK’s green energy transition.

The estate manages central London shops, one of the largest land portfolios in the country and the seabed around the UK in the public interest. It has traditionally drawn the bulk of its revenue from central London property, but a combination of the pandemic and the growing importance of clean energy looks set to recast that role.

Like other major landlords such as Hammerson, Land Securities and British Land, it has been badly affected by coronavirus, collecting just 81 per cent of rents due for the year and setting aside £54m to support hard-hit tenants.

The poor performance of shops put a £1.1bn dent in the value of the estate’s holdings in London and the regions and helped drag down net revenue profit to £269m, 22 per cent below the previous year.

But despite that, the overall value of the Crown Estate’s portfolio increased 7.5 per cent to £14.4bn in the year to March 31 2021 as the company’s marine holdings, which include the seabed around England, Wales and Northern Ireland, more than doubled in value.

An auction in February attracted record bids from companies including oil majors such as BP for seabed rights to develop offshore wind projects in English and Welsh waters, pushing the valuation of the seabed up from £2bn to £4.1bn in the year.

The Crown Estate came under heavy criticism at the time from renewable energy organisations such as RenewableUK for the relatively modest amount of capacity that was made available in the seabed auction as well as its structure. Competition for the rights was particularly fierce given oil majors’ commitments to divert more spending to cleaner technologies such as offshore wind.

The auction was the first in Europe to involve annual “option fees”, which winning developers pay over a period of three to 10 years before they are replaced by a “rent” of 2 per cent of a wind farm’s turnover. Previous auctions involved fixed annual options fees.

RenewableUK has also warned that auctions run on a similar basis would “ultimately mean higher costs for developers and consumers”.

Overall, the fees bid in the auction could raise up to £8.8bn over 10 years for the Treasury, to which the estate returns annual profits. It will also be a boon for the monarch, who is allocated a portion of profits by the Treasury via a “sovereign grant”. 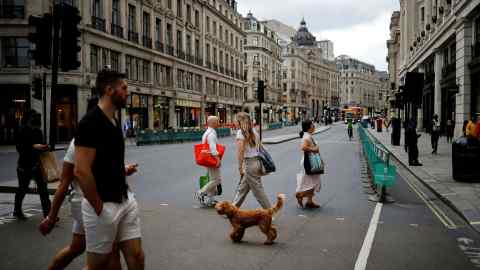 Dan Labbad, the estate’s chief executive, insisted the Crown’s role in developing the UK’s offshore wind sector was “to catalyse the building of that market, rather than just maximising financial returns”.

But he acknowledged that, given supportive government policy and the country’s need to shift its energy mix towards cleaner sources of power, “there will clearly be growth in the valuation” of the marine portfolio.

Meanwhile, Labbad warned that more pain was likely to come for the high street. Vacancy rates in the estate’s London portfolio increased from 4.7 per cent to 8.2 per cent over the year. “My guess is it gets a little bit worse before it gets better,” said Labbad.