The automotive sector is the largest transport sector with some 80-90 million cars sold globally each year. A global fleet of approximately 1.1 billion cars in-use make the greatest contributions to road emissions, leading the sector to become a natural early focal point for green policymakers.

While electric cars date back one hundred years, electric car markets as we know them today have been growing since circa 2011. Due to their scale, car markets create the largest opportunities for players in the electric vehicle supply chain, from advanced materials through to battery packs, power electronics and electric motors. Moreover, they drive the rapid pace of innovation that enables electrification in other transport sectors, whether in technology, regulation, or business models. The aim of this report is to provide a regional deep dive into the latest technology and market trends for electric cars. 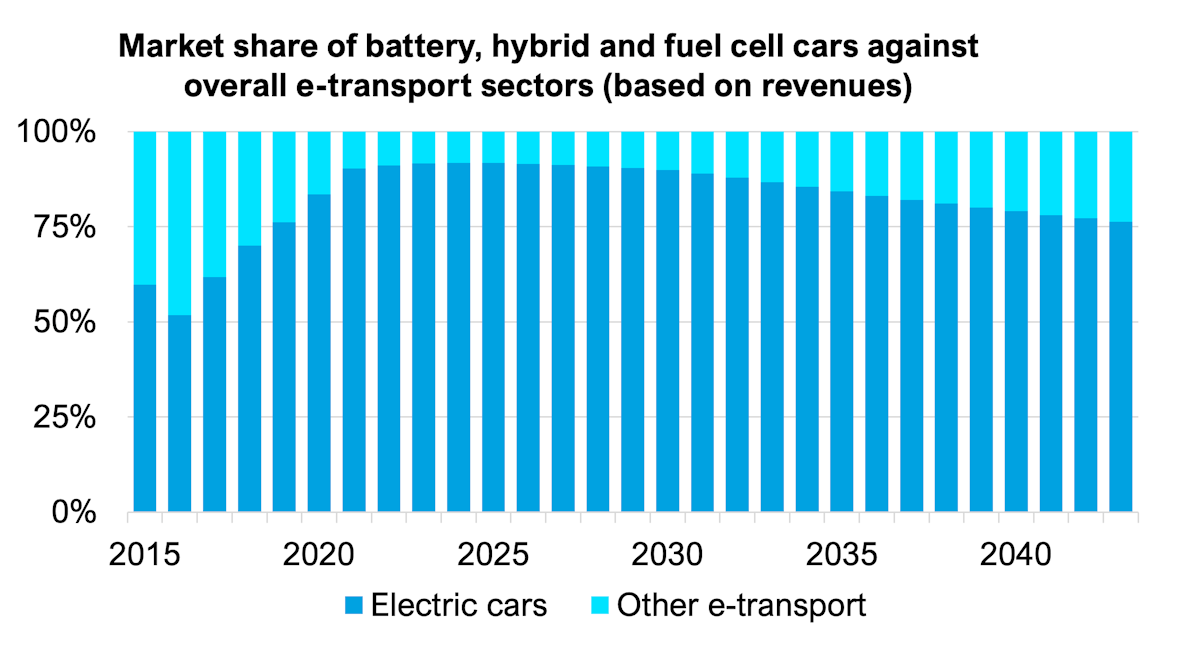 Global electric car sales surged in 2021 to over 6.4 million and IDTechEx predicts sales will reach over 9 million in 2022. However, key challenges persist, such as the chip shortage and manufacturing disruption from the pandemic. On the horizon, fundamental shortages of critical raw materials loom, particularly lithium carbonate. While these challenges may impact timescales and the pace of the transition, major automotive markets are headed in one direction: decarbonisation through electric vehicles.

The report reveals the progress and opportunities for fuel cells in car markets, providing 20-year global forecasts. The deployment of fuel cells within vehicles is not a new concept. Major OEMs including Toyota, Ford, Honda, GM, Hyundai, Volkswagen, Daimler, and BMW have invested large sums over the past 30 years in advancing the technology. For passenger cars, a huge amount of effort and expense has gone into developing fuel cells, but in 2021 only two major OEMs, Toyota and Hyundai, have FCEV cars in production and fewer than 20,000 FCEV were sold in 2021.

Fuel cell vehicle deployments face considerable challenges, including decreasing the cost of fuel cell system components and rolling out sufficient hydrogen refuelling infrastructure. Also essential will be the availability of cheap ‘green’ hydrogen, produced by the electrolysis of water using renewable electricity, which analysis in the new IDTechEx report highlights will be vital to FCEVs delivering the environmental credentials on which they are being sold.

‘Autonomous vehicle’ (AV) is an umbrella term for the six levels as defined by the SAE. Today, most new cars are arriving with the option of level 2 functionality, and the industry is technically ready for level 3 once regulatory hurdles clear.

In recent years, vast improvements to autonomous vehicle technologies such as radar, lidar, HD cameras and software have propelled robotaxis to the cusp of market-readiness. Autonomous trials from Waymo, Cruise, and others are now evolving into autonomous services, with legislative barriers clearing. IDTechEx forecasts reveal how these services will come to dominate within 20 years.

Some regions are even pushing for level 4 technology, but most activity here is still with autonomous mobility start-ups and in trial stages. Overall, the report finds autonomous vehicles will become a massively disruptive technology which will grow rapidly at a rate of up to 47% to transform the auto market over the next two decades.

Li-ion batteries based on graphite anodes and layered oxide cathodes (NMC, NCA) have come to dominate large parts of electric vehicle markets. However, as they start to reach their performance limits and as environmental and supply risks are highlighted, improvements and alternatives to Li-ion batteries become increasingly important. This report summarises trends and developments in advanced battery technologies, including to Li-ion cell designs, silicon anodes and solid-state batteries.

Also discussed are pack level trends. Several different materials are required to assemble a battery pack, including TIMs, adhesives, gaskets, impregnation, potting, fillers and more. A general trend towards larger cell form factors and non-modular cell-to-pack battery designs is discussed, a trend expected to reduce the number of connections, busbars, and cables between cells and modules.

In automotive power electronics (inverters, onboard chargers, DC-DC converters), key advancements are being made to improve powertrain efficiency, allowing for either battery pack capacity reduction or improved range. One of the key avenues to achieving greater efficiencies is the transition to silicon carbide MOSFETs and high voltage vehicle platforms at or above 800V. A trend which has been increasing in pace as Renault, BYD, GM and Hyundai have announced 800V vehicle platforms which will adopt silicon carbide MOSFETs in their power electronics through 2025.

The transition is presenting fresh challenges for power module package materials, as higher switching frequencies, increased power densities and increased operational temperatures are demanded all whilst maintaining a 15-year service life. The report shows technology outlooks for 800V platform voltages and adoption of SiC inverters. It further discusses how, as the power density of semiconductor chips has been increasing exponentially over the past decade, new double-sided cooling designs, copper wirebonds and lead frames have emerged as the enabler.

There are several key performance metrics for electric motors. Power and torque density enables improved driving dynamics in a smaller and lighter package, with weight and space being at a premium in EVs. Another critical area is drive cycle efficiency. Improving efficiency means that less of the precious energy stored in the battery is wasted when accelerating the vehicle, leading to improved range from the same battery capacity. Due to the many different considerations in motor design, the EV market has adopted several different solutions including permanent magnet, induction, and wound-rotor motors.

The report reveals trends around motor technology and topology, power and torque density, and materials utilisation. This report addresses these trends within the markets for battery-electric cars with OEM use-cases and a technology outlook by motor type – permanent magnet (PM), induction, wound-rotor, in-wheel PM, axial-flux PM.

What Color Is Your Hydrogen? Not All Hydrogen Is Clean.