Poitier-Henderson talked about how her father was often mobbed by fans when he went out, which was not always appreciated by his daughters when they were young. Once, the family was at Disneyland and when fans started to crowd around, asking, “Is that Sidney Poitier?” his annoyed daughters said, “No, he just looks like him.”

Their father discovered what they were doing and told them to stop.

“He told us that these were the people who put us and him where he was, so we had to respect that,” she said.

Anika Poitier is a director and actor.

“It’s really important to have diversity in the stories that we tell, and they need to be told by the people who are living these stories — and that’s a huge problem in this industry,” she said.

“There are so many stories about Black people and brown people and women that are not told by the people who have lived these stories, and to deny their perspective is dangerous.”

Anika Poitier said she hopes The Sidney Poitier New American Film School will encourage students to tell their stories and provide a platform to share them.

“Because I think that it’s what the world needs desperately right now.”

Sydney Poitier Heartsong, an actor and producer, said that her father wanted Black people to have opportunities in all aspects of the film industry.

“He wanted to see his story and his likeness represented on the screen, and he was also keenly aware of the fact that that wasn’t going to fully happen, in the way that it should, unless there were people also behind the camera.”

Several current ASU film students also spoke on the video, describing how important it is for people to tell their own stories. 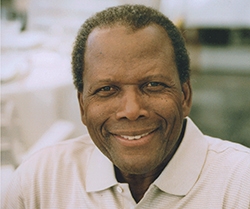 According to his daughter Sydney Poitier Heartsong, the two most important things to Sidney Poitier are education and the arts, a marriage found at ASU’s film school.

Serena Hoskyns said that once she was on campus, she knew she was doing what she was supposed to.

“There’s a responsibility in film,” she said. “We influence so much of the world, and with the tropes and stories and things that have been left in place, it’s time for an emerging generation to show growth.”

In the video, Michael Burns, an ASU alumnus and now the vice chairman of Lionsgate entertainment studio, said that change in the film industry is long overdue.

“I also know that this naming is more than just a moment in time. It signals a transformative cultural shift in our nation,” he said. “Sidney Poitier is a hero and a role model whose example will ignite the energies of countless students.”

Tiffany Ana López, the new vice provost for inclusion and community engagement at ASU, said that, like many students in The Sidney Poitier New American Film School, she was the first in her family to attend college.

“I understand that for so many of our students, if they can’t see it, they can’t be it,” she said.

“It’s very meaningful that this is a film school that looks, acts and works like no other, a film school now named for a historic innovator in his field, someone constantly pushing for a level of excellence that’s informed by thinking about social justice and community,” said López, the former director of the School of Film, Dance and Theatre in the Herberger Institute.

Among the celebrities on the video was actor and civil rights activist Harry Belafonte, a close friend of Poitier.

“Sidney is not only a fine artist but also a dear human being and a wonderful American citizen,” he said. “Thank you, Arizona State.”

Actor John Lithgow noted that many university institutions are named for people whose achievements have faded from memory.

“That will never happen to you, Sidney. You are one of our founding fathers,” he said.

“ASU is honoring you. But you are honoring ASU.”

Climate change is endangering sacred land. For these Native women, it threatens ‘everything we are.’

Kerry Emanuel: A climate scientist and meteorologist in the eye of the storm | MIT News

Kerry Emanuel: A climate scientist and meteorologist in the eye of the storm | MIT News