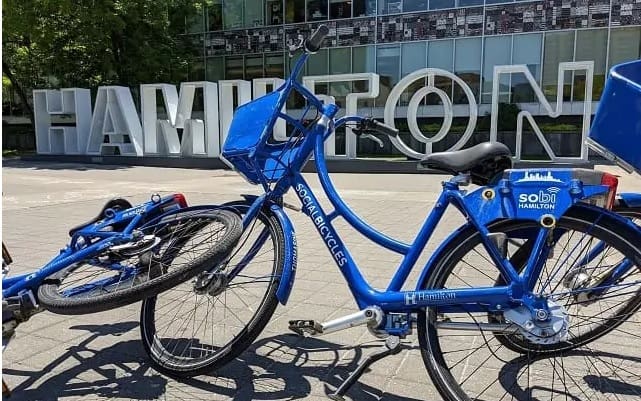 Roughly 3 in 5 people are interested but wary about cycling, while fewer than 1 per cent of trips in Hamilton and Burlington are taken on two wheels, despite a relatively mild climate and pleasant natural landscape.

And an area climate group is hoping that contrast will become a local issue in the lead-up to municipal elections this fall. The Bay Area Climate Change Council (BACCC) said recently it is hopeful residents in the neighbouring cities will contact their councillors, along with candidates about expanding bike share programs Hamilton-wide and into Burlington.

Hamilton Bike Share Inc. (HBSI) was established in 2015, and despite some scary moments with funding instability, has persevered and had over 2 million uses. Burlington does not have a similar program, although there is a small bike loan program for older adults at Burlington Seniors’ Centre with limited hours and a limited number of bikes.

“Expanding bike share across Hamilton and in to Burlington would provide residents with real choice in transportation options, and will help Hamilton-Burlington reach net zero,” Lauren McAusland, progams coordinator at BACCC, states, in reference to the City of Hamilton’s long-term goal of reaching net zero by 2050.

Both cities declared a climate crisis in 2019. About one-sixth of greenhouse gas emissions in the Hamilton and Burlington area come from transportation, according to Mohawk College’s Centre for Climate Change Management. But safe infrastructure is one hindrance in winning people over to opting for cycling instead of driving to get around or to commute to work and/or school. The Portland Bureau of Transporation — whose bike share program has donated bikes to Hamilton — once surveyed people about cycling and found 60 per cent would be persuaded to cycle with improved infrastructure.

In May, BACCC presented 31 recommendations to a Hamilton city couuncil committee about how to encourage residents to use greener means of conveyance. Those were accepted for further study.

“If low carbon forms of transportation, such as cycling, are not perceived as safe, convenient, reliable, and equitable, we cannot reasonably expect residents to select those options to get around,” McCausland adds.

Currently, HBSI has a fleet of about 800 smart bikes across 25 square km of lower-city Hamilton. The operations of the system is funded by user revenues, sponsorship, donations, and contributions from the City of Hamilton.

The BACCC contends expanding HBSI to the Mountain “will further increase ridership.” It also notes that Hamilton Street Railway public transit has a Mountain Climber program that enables cyclists to go up or down the Niagara Escarpment for free, while the Keddy Access Trail also has concrete barrier between cyclists and motorists.

In the meantime, BACCC has set up a page at bayareaclimate.ca to assist residents with contacting councillors.

Subscribe now to receive our daily email of today’s top stories in your city!

Finding much to like in Senate climate deal – Harvard Gazette