TOKYO — Hitachi is developing a system to monitor energy consumption and the use of renewable energy in factories, at a time when verifying greenhouse gas emissions reduction efforts is becoming more important as investors put more focus on companies’ green credentials.

The Japanese industrial conglomerate plans to develop and implement a new system to measure and optimize energy use in at least three of its factories this year. The company then hopes to make the system available for other manufacturers and suppliers from 2022.

The system eventually would be a key tool to prove carbon neutrality in the supply chain, Hitachi’s chief environmental officer and executive vice-president Alistair Dormer told Nikkei Asia in an interview. There would be a need for this sort of authentication because, just as companies’ financial records and taxes are audited, “we think the same thing will be [required] for ESG [environment, social and governance concerns], because it is becoming so important to investors” and society, he said.

The monitoring system is primarily a part of Hitachi’s effort to reduce its own emissions. The company aims to cut scope 1 and 2 GHG emissions — meaning direct emissions and indirect emissions from purchased energy — by 100% from 2010 levels by 2030. This means all factories need to be carbon neutral in 10 years.

Three of Hitachi factories, under semiconductor manufacturing equipment subsidiary Hitachi High-Tech, have so far achieved carbon neutrality by switching all electricity to renewable energy. “[For] our factories overseas, it can be a bit easier because of the availability of renewable energy,” such as in Europe, where green energy tends to be low cost and abundant, said Dormer. Facilities in Japan would switch to renewables after 2025, he said. 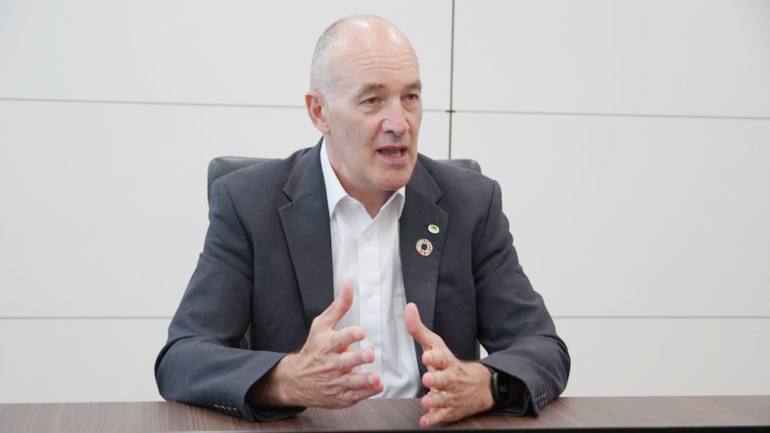 Hitachi has estimated that it would spend 60 billion yen ($543 million) on reducing energy consumption and 24 billion yen on renewable energy for its own facilities in the next 10 years. “If we don’t invest to become carbon neutral, we won’t be competitive in the future,” Dormer emphasized. He also added that reduced energy use would eventually lead to cost reductions.

Hitachi also aims to cut 80% of emissions in its entire value chain by 2050 — including indirect emissions by suppliers and customers. The analysis of emission-reduction plans with Hitachi’s top suppliers, are expected to finish this year, according to Dormer.

For the long term, in a decade or so, Hitachi is eyeing new technologies such as hydrogen production and carbon capture and utilization. “We’ve given our researchers the challenge of saying, how can you study [carbon dioxide] so that you can actually create something from CO2?” said Dormer. Research focus in the nearer future, in about five years, would be on electric vehicles, hydrogen blending and a more efficient electricity network, Dormer suggested.

Hitachi has been focused on strengthening its IT capabilities for some years, offering services through its internet of things platform Lumada, which was launched in 2016. The company recently completed the acquisition of the U.S. software developer GlobalLogic for about 1 trillion yen. Many of the environmental benefits across units of the company “will be created by digital investment,” through optimizations using data analytics, said Dormer.

This month, Hitachi announced the purchase of European defense electronics company Thales’ railway signaling and train control system division, valued at 1.66 billion euros ($1.95 billion), as part of an expansion of its digital services and also making more data available to the company. “We will be acquiring some excellent energy saving technology, such as [the] green speed driver advisory system, which calculates and advises drivers of the optimum energy-saving speed to meet the timetable,” Dormer said at a press conference. Solar panels on the roof of one of Hitachi’s factories. The company aims to have all its factories net-zero of carbon emissions by 2030. (Courtesy of Hitachi)

Dormer, who heads Hitachi’s mobility sector and is chairman of the board of Hitachi Europe, said in the interview that Europe’s ambitious climate policies create “great opportunity” for the company. “We are engaged with the European Union and governments to understand their investment plans,” as the region looks to pour funding into decarbonization efforts.

He added that Hitachi was working closely with the Italian and U.K. governments, as a principal sponsor of this year’s United Nations Climate Change Conference of the Parties summit, COP26, taking place in Glasgow in November.