How government procurement can shape a net zero built environment 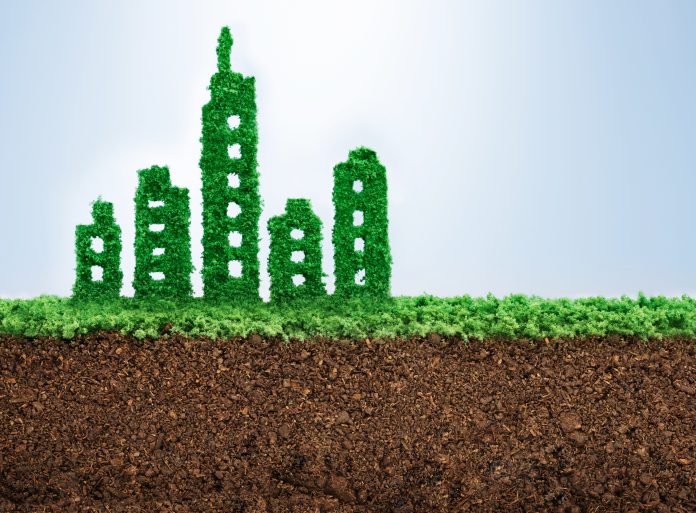 New research argues that governments must use their procurement power to green the built environment. Samuel Harrison, research fellow at StateUp, takes a look

2021 is shaping up to be a turning point in the race to solve the climate crisis. In April, the UK set the world’s most ambitious target for cutting greenhouse gas emissions, promising a 78% reduction by 2035. And in November, it will host the COP26 summit, where it is hoped the world will rally around a strategy for halting climate breakdown.

But while a good deal of progress has been made, there is still much to be done to move towards net zero emissions. And it is not enough alone for governments to set policy to green the economy; they must also focus on decarbonising their own organisations and operations. New research by StateUp, the international intelligence and advisory firm for public-purpose technology, identifies the £7.8trn annual collective global procurement spend for which governments are responsible as critical to this effort.

The report focuses on five priority areas. It calls for:

Focus on the built environment

The built environment is at the heart of the process of decarbonising government. Between now and 2040, 230bn sq m of new buildings will be built – the equivalent of adding the floor area of Japan to the planet every single year to 2060.

To have any chance of meeting the Paris climate goals, energy intensity per square metre will need to improve 30% by 2030. The built infrastructure for fast-growing cities in developing countries alone could release 226 gigatonnes (Gt) of CO2 into the atmosphere by 2050 – more than four times the amount already used to build existing developed world infrastructure. The International Energy Agency has warned that in order to reach net zero, direct building CO2 emissions will have to fall by 50% by 2030, or around 6% per year.

And while not all built environment assets are owned and operated by governments directly, the legal and economic frameworks and incentives around their construction, operation, and maintenance are also the responsibility of governments. Through both their procurement power and innovation policy decision-making, then, governments have the opportunity to shape the direction of travel for the future of infrastructure. These decisions will critically impact the lives of future citizens and the health of the planet.

The role of digital and emerging technologies

Over the past 10 years, there has been tremendous progress in the technologies available to fuel a built environment sector that is both more in tune with nature and that better serves peoples’ needs.

In some cases, governments are leading the way on their uptake. The UK has quietly disbursed £932m in grants for decarbonising public sector buildings, with a focus on energy efficiency and heat decarbonisation, following a competition in January 2021. The European Union, meanwhile, is aiming for 35m building renovations by 2030. It prioritises funding energy efficient renovations and will usher in binding energy performance standards for all EU buildings in 2021.

Green technology developments for the built environment are taking place across the full lifecycle of the buildings and public spaces, from planning to demolition. While Building Information Modelling (BIM) is perhaps the most well-known technology-based practice, there is increasing recognition of the role that advanced technologies from drones to sensors and 3D printing can play in improving how the built environment is understood, planned, managed and inhabited.

Many innovations are being developed not by incumbent providers in the sector, but by start-ups: young companies founded to develop technology solutions intended to address specific problems. Table 5 documents 10 high-quality start-ups around the world that are working to decarbonise the built environment, often working directly with public sector clients to meet this ambition.

In this way, steel and cement alone have become responsible for at least 8% of global carbon emissions. Using new composites with potentially lower embodied carbon, made from natural products like hemp and mycelium or upcycled waste products like steel dust and even carbon dioxide itself, the built environment sector can radically reduce its carbon footprint.

Governments can support their use by incentivising designers and builders, including in public projects, to take a whole-life approach to calculating impact and choosing materials. They can encourage them to take into account not just emissions from a building, but also the manufacture and disposal of its materials. They can also encourage companies which upcycle waste. Carbon Craft Design (India), for example, has developed methods to convert waste products from building materials, including carbon emissions themselves, into useful materials. 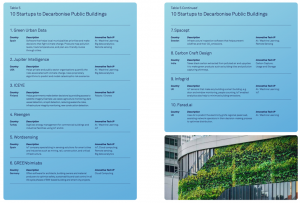 Buildings do not just emit greenhouse gases while they are being built. They also emit a great deal while they are being used, and even when they are demolished. At present, these account for 36% of emissions in the EU. The operation of buildings also accounts for about 50% of all extracted materials, 33% of water consumed and 35% of waste.

Newer dwellings are already substantially more energy efficient than older ones on average, which is a cause for optimism. But the older ones will be around for a long time, which means retrofitting them with energy efficiency measures will be vital to achieve net zero carbon by 2050.

This is particularly important for governments to keep in mind, because government-owned building stock is disproportionately older than privately owned stock. Adding sensors and smart meters to buildings to monitor energy consumption and automatically manage environmental conditions helps to track and conserve energy usage. Infogrid (UK) and Worldsensing (Spain) offer versions of these sensors that are comparatively simple to install and offer automatic data reporting.

Governments have an opportunity to use the decarbonisation of their own old, energy-inefficient buildings to launch and promote public competitions. These can be important vehicles for finding and showcasing efficient and effective methods of decarbonisation and raising awareness of how it can be done.

One of the greatest challenges to greening the built environment is coordination. Our infrastructure and built environment systems combine to form a dynamic “system of systems” defined by its complexity: not static and predictable, but dynamic and evolving. These systems are increasingly cyber-physical, composed of interacting digital, analogue, physical and human components, the digital elements supporting the functionality of physical infrastructure. That is one reason why coordination between those involved in the built environment has become more important than ever.

One of the most significant leaps towards a decarbonised built environment will be the use of recent breakthroughs in complex systems management. Systems engineering can be used to coordinate and mediate different demands on and from the built environment, and across sectors.

And digital twins offer an opportunity to make infrastructure projects more sustainable and resilient, by providing real-time updates on emissions and any emerging weaknesses, along with the means of testing the impacts of upgrades to the project. This is essential for decarbonising the built environment. As electric cars become more common, for example, and digital technology is integrated into roads and rail, the transport infrastructure system will need to be still more closely coordinated with the power grid than ever before.

As Dr Timea Nochta, senior research associate at the Centre for Smart Infrastructure & Construction (CSIC), University of Cambridge, describes in States Regenerate: “Digital twins represent an enormous opportunity for governments to move towards data-driven and evidence-based climate change mitigation – both with regards to their own assets, as well as requiring other asset owners and managers to digitalise their planning and operations.”

Digital twins, Dr Nochta notes, “as realistic digital representations of physical assets, systems and processes, can help not only collect and process data to produce insights regarding greenhouse gas emissions from asset operations and management, but can also provide a digital environment simulating the impact of various options to reduce these emissions, and monitor the impact of implemented measures.”

The built environment and public-purpose technology

The publication of States Regenerate marks the launch of the Nebula public-purpose technology intelligence platform, designed as the go-to source for data, research and analysis on GovTech, CivTech and Tech for Place and Planet. A key source for the research in States Regenerate into high-quality start-ups focused on greening government has been the selective, carefully curated database of public-purpose technology start-ups that forms a core component of Nebula.

Data on leading and emerging green tech innovations is critical for policy and investment decision-makers; it not only provides transparency on the technologies that governments themselves can use, but also on how innovation policy can be shaped to support green tech R&D.

Prague: The circular European city you haven’t heard about yet

Prague: The circular European city you haven’t heard about yet