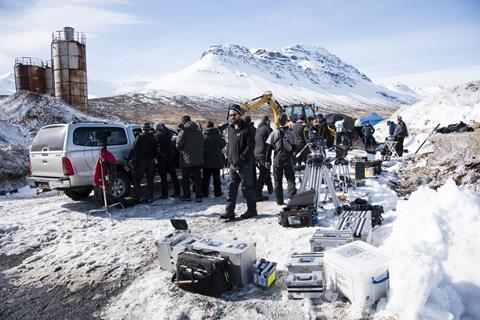 “There is no place on earth where anything is guaranteed with regard to the weather anymore.” This is the stark warning of Mike Downey, veteran indie producer and chairman of the European Film Academy, talking about the effects of climate change on filming locations worldwide.

The subject has been overshadowed recently by the impact of the Covid-19 pandemic, but how the film industry adjusts to the challenge of climate change and the part it plays in contributing towards it remains an urgent priority.

The latest edition of our ScreenDaily Talks webinar series is taking place on Thursday June 25 at 17.00 BST and will explore how international productions are responding to the global challenges of Covid-19 and climate change.

“Studios have to do their due diligence on what the safety implications are when choosing their shooting locations, including potential natural disasters like tsunamis and earthquakes,” says UK-based location manager Georgette Turner, whose credits include Mission: Impossible — Fallout, Edge Of Tomorrow and Night At The Museum: Secret Of The Tomb.

“Anywhere you go, the weather and conditions are not predictable. It has a huge effect on production,” adds the US-based veteran location scout Lori Balton, who worked second unit for Marvel’s Shang-Chi And The Legend Of The Ten Rings, which filmed in Australia during the wildfires earlier this year. “The light and air were different because of the particulate matter in the sky,” she observes.

Toronto-based location manager and scout John Rakich, whose recent credits include Netflix’s Grand Army and Jupiter’s Legacy, agrees: “Wherever you are now, the seasons are not predictable. I’ve got designers asking me, ‘Will there be green trees in March?’ and my answer is, ‘I don’t know anymore.’ Good luck if you want to do a winter movie with snow.”

Relying on snow proved a problem for Sky Atlantic’s Fortitude, starring Richard Dormer, Dennis Quaid, Sofie Grabol and Michael Gambon, which filmed in the east fjords of Iceland from 2014 for its first two seasons.

“We were set up in Reydarfjordur, which is on the coast with mountains and fjords. The producers were hoping for a lot of snow all the time, but that is tricky with global warming,” explains Einar Sveinn Thordarson of Pegasus Pictures, the series’ production service providers in Iceland. “The climate is not as consistent as in the old days. The snow would come and go, so we had to have a plan B and C, including using fake snow to keep the scenery consistent.”

This is a common concern. “Filming in Russia is tricky because of the extreme weather,” says veteran producer Iain Smith, who has been working on drama Arctic 30 about a group of real-life Greenpeace activists who tried to protest Russian oil exploration in Arctic waters. “We had to look further south in places like Estonia and Lithuania, but the snow there is less reliable because of global warming.”

Unpredictable weather has an obvious effect on production schedules, with many shooting days lost. “This could be $250,000 to $750,000 a day on the big projects,” says Smith. Then there are the actors to consider, who often have tight shooting windows.

Planning, research and a great understanding of locations is key. “Filming in Southeast Asia in April, for example, is a nightmare because it’s very hot,” warns Smith. “And you’re asking for trouble going to the Caribbean in August or September. I’ve heard of sets being destroyed in hurricanes.”

The industry is fully aware that it contributes to the problem at all levels, from production to film festivals. There is the issue of waste and emissions from productions, whether it is the disposal of film sets, on-set equipment running for long periods of time or just getting rid of refuse.

“As location managers, we’ve noticed we have to put in a lot more power generation to support our huge shoots,” says Tom Howard, a UK-based location manager whose credits include The Secret Garden and Misbehaviour. “We’ve got some cars that are hybrid, but not enough hybrid generators. Then there are generators running overnight for the camera trucks. We’ve tried using battery packs, but they don’t last long enough and you have to stick them back on a generator to charge. The production managers ask if we can use biofuel. We tell them it costs 20p extra, and they say we can’t afford it.”

Cost is one of the hurdles when persuading productions to have a green budget and someone to oversee it. “They say, ‘We need a policy on recycling and waste,’ which is great,” says Howard. “We need someone to sort the waste disposal at source, so it’s not contaminated, which also requires specialist bin bags. But when I tell them it costs £1,500 a week, they say, ‘Oh no, just put out three bin bags and some signage and we’ll put it on the call sheet’.”

Similarly, at the end of production, whole sets are often thrown in the skip, especially on larger productions. The intention is for them to be recycled, but the likelihood is they will be chipped and burned. “People should re-use sets,” insists Howard. “But the higher up you go in the production scale and value, they don’t want to see their sets being re-used for [UK soap] EastEndersor on a low-budget drama, so it’s destroyed.”

However steps are being taken. Under the auspices of Interreg Europe, which helps regional and local governments across Europe to develop and deliver better policy, the European Union launched the five-year Green Screen project in 2017 with the support of commissions, funds and development agencies in eight European regions. The project has a budget of nearly $2.2m (€2m).

“The goal is to reduce the carbon footprint of European film and TV production through the sharing of information, development of regional policies, and training in sustainable measures,” explains EFA’s Downey.

Film commissions worldwide are also acting. The European Film Commission Network website has assembled toolkits, guides and handbooks from nine of its member commissions. Among these, Flanders Audiovisual Fund in Belgium has been highlighted for tying sustainability to funding. Productions must receive ‘eco-coaching’ and meet carbon-footprint standards before receiving the last 10% instalment of support.

Trentino Film Commission’s T-Green Film bills itself as the first regional fund in Europe that awards and certifies productions applying environmental protection measures to their works. While Hamburg Schleswig-Holstein Film Commission’s Green Shooting Card is a seal of approval that can be helpful when applying for location permits.

In the UK, Film London, a lead partner in the EU’s Green Screen initiative, has its own project — also called Green Screen — which provides an interactive step-by-step guide, department-tailored tips, action plans and potential discounts on filming fees for certain locations. An official audit precedes the project being awarded a Green Screen stamp, which can be used in its end credits.

Filmmakers are taking to the challenge. “Responsible producers like myself are obliged to look after the environment as part of our filmmaking strategy,” says Iain Smith. “We tend to use second-hand timber and are careful to make sure it’s re-used. We also try to keep people [from] flying. Instead of bringing as many Americans over for the Warner/Netflix TV series Sandman, shooting at Shepperton in the UK, we’re trying to stay local — finding talent, crew and directors here, if possible.”

Fatima Lageras, founder of Sweden’s Swixer Film, agrees: “If the country you’re filming in offers professional equipment and crew, use it. And require that your service partner, as much as possible, only uses eco-friendly sub-vendors when it comes to catering and transport options.”

Other productions are doing the same. “We have arranged video-streaming solutions for clients, providing full quality monitoring,” says Lageras. “A director and/or producer can be present and control the shoot even if they are not present in person.”

“We can imagine a more sustainable and cost-effective approach to film production abroad blossoming from the virus-scorched earth,” suggests Michael Moffett, managing director of Production Service Network, whose UK team worked remotely via WhatsApp with director Feras Fayyad during filming of Oscar-nominated documentary The Cave. “One in which client and agency stakeholders travel less as they grow comfortable with a virtual presence on set.”

Overall, there is a lot that can and should be done by the industry. “We can be a huge force for change, but we must act collectively and fast,” insists Downey. “It’s not hard to conceive of a time in the not-too-distant future, as our planet begins to fail, when people may choose to watch or not watch something based on whether it was made sustainably.”

Biscay Model: innovation in taxation could advance the SDGs