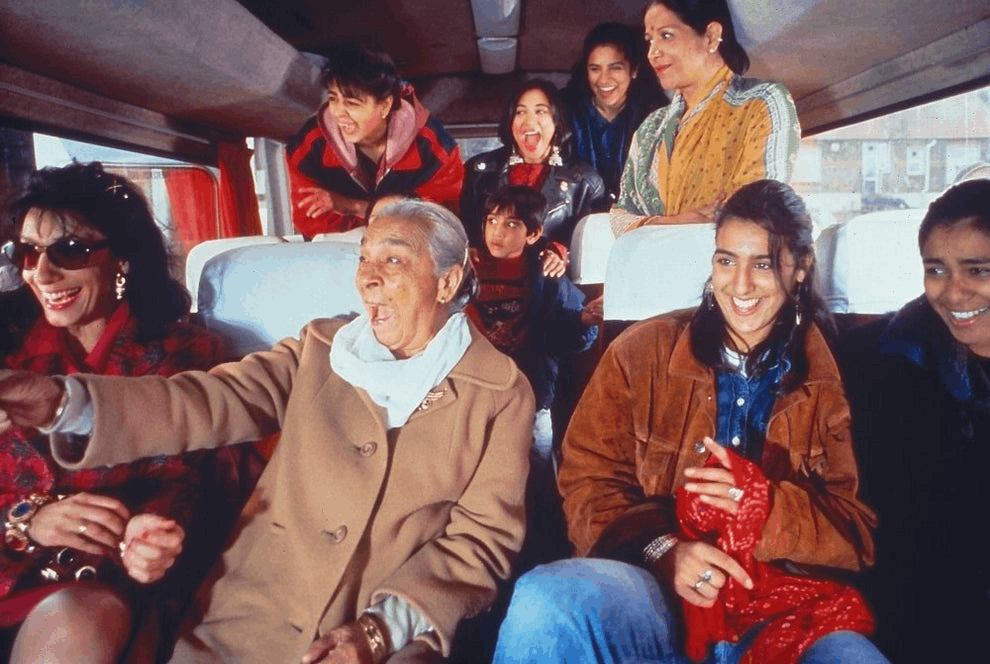 Bhaji on the Beach follows a group of British Indian women of different ages, who bond over their shared cultural experiences on a day trip

Filmmakers expertly portray shared experiences of the Indian diaspora all around the world and depict how Indian culture transcends beyond geographical borders.

Portrayal of the Indian immigrant or Indian diaspora experience in cinema has evolved beyond romantic dance sequences shot against beautiful backdrops. In mainstream and as well as independent movies, filmmakers tackle issues such as immigration, identity crisis and how undertones of racism still affect new generations of foreign-born Indians.

Some of the most critically acclaimed films that have authentically captured this experience have been made by Mira Nair, an Indian-American director who largely focuses on films on Indian society for international audiences.

Her 2006 film The Namesake, with the late Irrfan Khan, is based on Jhumpa Lahiri’s debut novel of the same name, and depicts the difficulties of a family’s cross-cultural experiences when they move from Kolkata to the suburbs of New York City. The film focuses on teenage protagonist Gogol who struggles to fit into a new American culture and increasingly begins to resent his parents for holding on to their Indian customs and traditions. Nair skilfully depicts a reality that many first generation immigrants battle with.

“I think with the change in political climate, immigration has definitely become a hot topic in art as well. And I think that’s a good thing because it brings it into the mainstream conversation,” says Ananya Tandon, an American-Indian theatre student based in Los Angeles.

Tandon moved to America when she was 6 years old, and initially found it difficult to adjust to the change in environment. Mira Nair is one of her favourite directors, and she credits watching certain influential Indian films for helping her accept her cultural identity.

“When I started elementary school here, it wasn’t a very diverse environment. I remember when my teacher asked me where I was from, and I said India, everyone automatically assumed I meant a Native American tribe! Even educators sometimes don’t have that much awareness so the fact that films like these show our stories accurately is really amazing,” Tandon explains.

The Namesake shows how Gogol, an Indian-American immigrant, finally starts to accept his cultural identity

Another Mira Nair production, Monsoon Wedding (2001), became one of the most critically acclaimed movies of her career. Starring Naseeruddin Shah and Lillete Dubey, the film follows a chaotic, typical “big Indian wedding” celebration in a large Punjabi family, between Aditi and Hemant, an NRI computer programmer from Houston. Although the festivities take place in Delhi, the characters all arrive from a multitude of countries, which makes for an interesting turn of events.

A central storyline deals with how despite foreign upbringing, certain traditional Indian mind-sets are juxtaposed with supposedly modern lifestyles. The film also tackles sensitive issues often considered taboo in Indian society, like child sexual abuse by a family member. When Ria, the protagonist’s cousin, reveals that Tej, her wealthy uncle from the United States, had molested her as a child, she is initially rebuked and shamed. An emotional turning point in the film is when her family believes her and ousts Tej, showing how family eventually breaks all barriers.

Monsoon Wedding received a Golden Globe nomination and won a Golden Lion award, making Nair only second Indian after Satyajit Ray to ever do so.

Another Nair film that tackles cross-cultural assimilation is Mississippi Masala (1991), which explores a rarely depicted story of an interracial romance between an Indian girl and African-American man, played by Denzel Washington. The female protagonist is a third-generation Ugandan Indian who escapes a dictatorship in her home country and migrates to America. Her father, Jay, is unable to come to terms with the culture shock and becomes distrustful to the people around him.

Gurinder Chadha is another prominent Indian-origin director; her films mainly portray the lives of British Indians. Her first hit film, Bhaji on the Beach (1993) follows a group of British-Punjabi women of different generations who take a field trip to Blackpool beach, where they come to terms with the constraints of their community’s expectations for women, as well as the racism they face as outsiders in their own country.

Acclaimed film critic Roger Ebert wrote that Chadha uses the trip “as a way to look at issues in the British Asian community, where old traditions and new ways make for uncomfortable situations.” The contrast between the mentality of the teenagers and younger characters and the older women reveal how Indian prejudices against interracial dating, divorce, and female empowerment persist even across continents.

It was praised by critics upon release, with Sight & Sounds, a British film magazine, commenting that the film had “trenchant observations about prevalent prejudices and what the younger, British-born generation of Asians had to offer.”

Sharma’s character moves to America to fulfil his dream, but is confronted with the harsh reality of a system often stacked against immigrants

The Illegal (2019) is an independent film that expertly tackles the issues of Indian immigration. Directed by Danish Renzu and featuring a cast including Life of Pi’s Suraj Sharma and Mirzapur’s Shweta Tripathi, it tells the story of Hassan, who comes to America with dreams of studying filmmaking, but struggles to keep up due to financial problems, eventually dropping out and being forced to work in a restaurant as an illegal immigrant.

Film critic Kshitij Rawat noted that the film illustrates “how the modern world, with its stringently drawn borders and anti-immigration sentiment, has hardwired us to reduce people to documents.”

The Illegal provides a nuanced, realistic but ultimately heart-breaking picture of a man who realises the American Dream is just an illusion, and how even family can make one feel completely alone when they are away from home.

The movie reached an audience of 1.8 million in only three days upon OTT release and was successful in the film festival circuit, winning awards at Mumbai International Film Festival and Vancouver South Asian Film Festival.

These films are incredibly relatable to NRI and foreign-born Indian audiences because they demonstrate their struggles in an authentic way and more importantly, they are told from a native viewpoint, which is a crucial element missing from hit South Asian movies like Slumdog Millionaire (2008) or even Lion (2016), which experts have often criticised for only showing a one-sided observation of Indian society. Although Bollywood movies are celebrated and watched by Indians worldwide, those experiences may not be universal to those who have not grown up in India, so movies like these give Indians like Tandon a voice and bring awareness to audiences.

“I think when we see movies like The Namesake or Bhaji on the Beach, every Indian-American kid can relate to having some point in their life when they refused to accept their ethnicity just to fit in, so it’s really cathartic to see that play out on screen,” Tandon says.