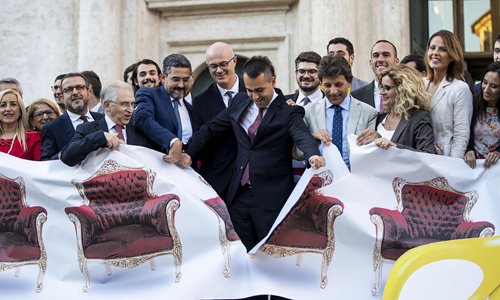 Italian Foreign Minister Luigi di Maio (center) rips a banner with photos of the armchairs exhibited by M5S parliamentarians in front of the Chamber of Deputies after the launch of the reform that reduces the number of parliamentarians in Rome on Tuesday. Photo: IC

He made the remarks at special ministerial talks which were attended by representatives from the Group of 20 (G20) countries and organized in collaboration with the Rome-based World Food Program (WFP).

The coronavirus crisis shed light on the need for wealthy countries to take steps to help those in need in poor and developing countries, said the minister from the southern Italian city of Brindisi.

The coronavirus pandemic could add another 100 million people to the global ranks of the hungry and malnourished, he said. “One of the first steps to building a better world is to make sure everyone is fed,” the minister added.

WFP Executive Director David Beasley said via social media that the world has “a window of opportunity to prevent famine, mass migration, and destabilization.”

Beasley also called for wealthy countries to dedicate more resources to the effort.

In the “Matera Declaration,” a joint statement released Tuesday at the end of a G20 foreign and development ministers meeting, the world’s 20 biggest economies said they “recognize that poverty alleviation, food security, and sustainable food systems, are key to ending hunger, encouraging social cohesion and community development, reducing socio-economic inequalities both between and within countries…”