“As President of this country, I want to assure you that the open door policy to foreign investment remains our strategic priority. The state shall fulfil its obligations and guarantees to our partners and investors to the full extent,” Tokayev said, assuring investors that the tragic January events had no effect on the country’s adherence to the market economy, rule of law, honoring international and domestic commitments. “On the contrary, it became a trigger for further improvement,” he argued.

Tokayev said the investigation is underway in strict compliance with international principles. However, he said that the January events have brought some degree of uncertainty to investors.

At the online meeting attended by the leadership of the Presidential Administration, the government, representatives of state bodies, multinational and national companies, Tokayev shared with investors his plans for the further transformation of the country. He said that the rule of law and its equal application to all without exception will become a fundamental pillar of the new course.

“From now on, the principal idea behind economic reforms is not abstract figures of GDP growth and place in global rankings but increase of income and living standards of our people. Of course, this objective is not achievable without forming a new class of entrepreneurs as well as inflows of high-quality investment,” the Kazakh President said. Our promise to the people and honest businesses to end favoritism, special interests and entitlements of the elite, corruption and oligopolies, will be implemented to the fullest extent,” he added.

Addressing the members of the Council, Tokayev noted that their recommendations would be of a great support for Kazakhstan and the course of the ongoing reforms.

“I believe that you are no less interested in genuine reform of Kazakhstan and the emergence of greater economic freedom in it than domestic entrepreneurs. Therefore, I suggest that you take an active part in the transformation and renewal of the economic life of the country. By jointly building new, fairer and more effective rules of the game, transparent and stable regulation, we will be able to create a truly attractive investment climate. It is in our mutual interests,” Tokayev said. 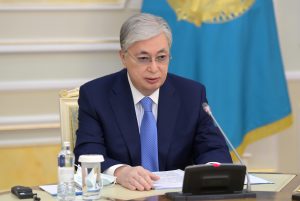 He stressed that the development of competition, the eradication of corruption, the construction of effective public administration and the cultivation of high-quality human capital are mandatory component to achieve these goals. Based on this, he focused on a number of urgent tasks.

The basis for building a strong economy and a decent business climate is a fair and impartial judicial system, Tokayev said, adding that it should become the main guarantor of the legitimate interests and rights of investors. In the context of resolving investment disputes, the President called for the full use of the independent AIFC Court and the International Arbitration Centre (IAC).

Moreover, the development of fair competition is another important priority of the new course, he said.

“The historical dominance of oligopolies in key sectors of the economy has stifled the development of markets and industries. We are decisively changing this situation from both legislative and practical points of view. The law on competition development signed this year provides for important initiatives. This includes equal access of market participants to limited resources, lowering the entry barriers to markets and eliminating the negative impact of  monopolies on neighboring markets,” he said, adding that an overhaul of the Samruk-Kazyna Fund’s operations is underway.

The Kazakh President also drew investors’ attention to Kazakhstan’s potential in the transport and logistics sector, noting that 83% of land transit traffic along the China–Europe corridor passes through Kazakhstan. “A large-scale Dostyk – Moiynty railway project will be implemented. This will increase the throughput capacity fivefold. The new branch of the Darbaza -Maktaral railway will boost the development of transit traffic from Russia to Central Asia. There are plans to build a high-speed railway between Turkestan – Shymkent – Tashkent,” he said.

Tokayev also highlighted the prospects of implementing investment projects in nuclear power, green hydrogen and digitalisation based on the ESG principles. In addition, he stressed the importance of continuing work on reforming the quasi-state sector, including privatisation and IPOs of state-owned enterprises and holdings.

At the same time, Tokayev spoke about the effectiveness of investment projects. “We know that currently formalism and lengthy internal approval processes continue to exist at all stages of attracting investments. As a result, investors have to wait months or even years for the appropriate decisions. Consequently, they simply postpone the implementation of investment projects or go to other countries. There are examples when international agreements get stuck in the offices of government agencies, thereby the ratification of agreements is delayed for many years. This was an issue in the past, and I believe it is happening now, even though similar agreements are signed in a couple of months in other countries,” he said, calling for a clear and understandable algorithm for supporting investment projects.

Tokayev called the transformation of the KazakhExport national company an additional mechanism for supporting investors, which will now be able to subsidize loans to foreign buyers of domestic products, as well as guarantee export transactions.

He also touched upon the issue of strengthening the work on removing administrative barriers, improving regulatory and fiscal policies.

He instructed the Government to improve approaches to the implementation of the strategic investment agreement, making this document more flexible and freer.

Everyone agrees climate change is real, but debate continues over how to manage it

Why interest in Saudi Arabia’s emerging film industry has exploded

Why interest in Saudi Arabia’s emerging film industry has exploded