HOUSTON — On a recent sunlit day, Aboobiada Ali Abdalla stood at the intersection of Tarnef and DeMoss drives in southwest Houston, once again revisiting the tragedy nearly five years ago that forever changed the lives of his family.

In August 2016, his 4-year-old son, Mohammed, was killed when he was hit in the crosswalk by a black GMC Acadia as the boy and his mother were walking an older brother and sister to school. Today, a marker at the base of a nearby loblolly pine bears the inscription: “In Memory of Mohammed Ali Abdalla 2011-2016.”

The family still lives just a block from the site of the crash in Houston’s diverse Gulfton neighborhood. Time has helped them heal, but Abdalla and his wife, Wigdan Ahmed Mohammed, both warn that Gulfton’s streets are still danger zones for anyone on foot, despite the city’s commitment to making improvements after their son’s death.

Often described as “the Ellis Island of Houston,” Gulfton is the most densely populated neighborhood in the nation’s fourth-largest city. Predominantly Hispanic, the low- to middle-income community also is one of the city’s most ethnically diverse, heavily comprised of immigrants who collectively speak at least 50 languages. Many of its roughly 50,000 residents live in aging apartment complexes built in the 1970s for prospering energy workers who moved out decades ago when Houston’s oil economy suffered a collapse.

With miles of broken or missing sidewalks, inadequate outdoor lighting, distracted drivers and wide streets that facilitate speeding, Gulfton could also be Exhibit A in what has become an alarming nationwide increase in pedestrian fatalities in recent years, disproportionately concentrated in the neighborhoods of people of color with low incomes. 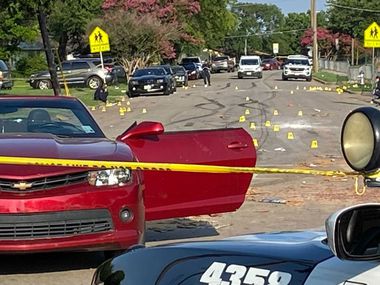 Tales of narrowly being missed by a car or SUV are a routine part of neighborhood conversations, residents say. From 2016 to 2020, five pedestrians were hit and killed and 22 injured on the streets of Gulfton, according to data from the Texas Department of Transportation.

In all, 104 pedestrians were hit by vehicles during the five-year period in that community, nearly all people of color, according to LINK Houston, a transportation advocacy nonprofit that analyzed the TxDOT data for Stateline.

A new Texas law aims to combat the problem. Meanwhile, cities in the Lone Star State and nationwide are embracing an anti-crash strategy dubbed Vision Zero. Turner also says it’s time to turn the page on the car-is-king culture.

“Just building a roadway capacity to carry more cars and trucks, that’s the old paradigm,” Turner said. Now, he said, Houston officials want to design a city where roads and streets “kind of fade” into a broader landscape that emphasizes parks and green space — what he describes as a “walkable, livable city.”

Nationwide, the number of pedestrians killed by drivers from 2010 to 2019 rose 45% to 6,237 a year, the equivalent of at least 17 fatalities a day, according to Smart Growth America, a nonprofit coalition of advocacy groups based in Washington, D.C.

Of the 53,435 fatalities that occurred during the decade-long period, Black pedestrians were killed at a rate 82% higher than non-Hispanic whites, according to the group’s March “Dangerous by Design 2021” report. The fatality rate in the nation’s lowest-income neighborhoods was nearly twice that of middle-income census tracts and nearly three times that of higher-income areas, the survey found.

“The lower a metro area’s median household income, the more dangerous its streets are likely to be for people walking,” the report stated. “This is unsurprising, given that low-income communities are less likely than higher-income communities to have sidewalks, marked crosswalks, and street design to support safer, slower speeds.”

Possible factors in the decade-long climb in pedestrian fatalities include the cellphones distractions — especially texting — and a shift in vehicle preference from cars to heavier light trucks and SUVs, which can inflict more serious injuries, according to the Governors Highway Safety Association.

But pedestrians sometimes ignore designated crosswalks, often resorting to jaywalking in the middle of the street. Experts say that many also often try to beat oncoming cars or fail to yield to vehicles. Others simply aren’t paying attention to traffic.

All of Texas’ major metropolitan areas are confronting an upturn in pedestrian crashes and are trying to reverse the pattern by adopting Vision Zero, which strives to end road crashes. Vision Zero started in Sweden 22 years ago, registered success in New York City and since has been adopted in 45 U.S. cities, said Leah Shahum, executive director of the Vision Zero Network.

Dallas, where the City Council in 2019 set a goal of eliminating traffic fatalities and cutting severe injuries in half by 2030, is among cities that have embraced Vision Zero.

Cities that have adopted the program vary in their approaches and priorities. In launching the first U.S. Vision Zero program in 2014, New York City created a task force encompassing 11 city departments to examine and combat all aspects of rising pedestrian crashes. One result was a 30% drop in traffic fatalities during the late afternoon and evening from late October through December 2016, compared with the same time period over the previous three years.

Texas Gov. Greg Abbott on June 18 signed a law imposing potential criminal penalties against motorists who injure someone in a crosswalk. The bipartisan bill stemmed from the death of woman who was fatally struck in a crosswalk in Missouri City, a Houston suburb.

State Rep. Ron Reynolds, D-Missouri City, who sponsored the bill in the House, compared the new statute to decades-old state laws fining people for not wearing seatbelts. He said the threat of criminal sanctions serves as a powerful deterrent to enforce good behavior in an automobile. The law also requiresg motorists to come to a complete stop while yielding to pedestrians in the crosswalk.

At least 60% of those killed during both years were people of color, according to LINK Houston.

A study of a 12-county metropolitan region anchored by Dallas-Fort Worth reported that the number of pedestrian fatalities climbed from 95 in 2014 to 146 in 2018, an overall increase of 54%. Pedestrians accounted for 1 in 5 of all traffic fatalities in D-FW, the nation’s fourth-most populous region. Nearly a quarter were hit and run.

The survey, conducted by the North Central Texas Council of Governments, also cited contributing factors behind the rising numbers of pedestrian crashes, both in Texas and nationwide. Among the findings: Pedestrian fatalities occur mostly in urban areas, at night in poor lighting, and often not at intersections, suggesting that jaywalking continues to be a problem.

Former City Council member Shirley Gonzales, who led efforts to create a Vision Zero program in San Antonio, recalls repeatedly being approached by residents with horror stories about pedestrian crashes even before she was elected.

“We knew it was mostly people of color being killed on the streets, and if we wanted to address this issue, we needed to address some inequities in our city,” she said. “When I was block-walking my community and shortly after as a newly elected council member, I would be approached by people who said a family member had been killed crossing the street,” she said. “Or a lady told me about her mother being killed while walking to church in the morning.”

And in Austin, the north-south artery of Interstate 35 claimed another victim June 20, when a 76-year-old man was struck in a hit-and-run along the frontage road. His body was discovered that morning by a security guard at a nearby construction site, and debris led police to conclude that the hit-and-run vehicle was a 2019-2021 silver Toyota Corolla that sustained extensive front end damage. Just two weeks earlier, the interstate was shut down for about three hours after a person was hit by an 18-wheeler, possibly while trying to cross the freeway.

The data reveals a pattern of racial disparities among people killed trying to cross I-35, according to a report released in May by Austin’s Vision Zero. Although Black people comprise less than 8% of the Austin population, they accounted for 20% of the pedestrians killed on the interstate in the last five years, according to the report.

The recently signed Texas law was named after Lisa Torry Smith, who was killed by an SUV in a crosswalk in Missouri City while walking her son to school. The law was pushed by her sister, Gina Torry of Minneapolis.

“In honoring my sister’s life and death, I have made it a point to ensure to the best of our ability that this doesn’t happen again,” Gina Torry said. “And if it does, there are consequences.”

Other advocacy efforts have been less successful. Kathy Sokolic of Austin became chair of the Central Texas Families For Safe Streets after her then-9-year-old nephew was left permanently injured when hit by a pickup in 2016.

She worked with state Rep. Celia Israel, D-Austin, on a bill to reduce speed limits in residential areas, but it died after failing to get considered in advance of a critical deadline.

Sokolic said the bill’s demise left her angry and disappointed, but she plans to keep fighting. “I couldn’t fix my nephew, so I figured I could fix the law,” she said.

This story was produced by Stateline, an initiative of The Pew Charitable Trusts.