As northeast China freezes with the onset of winter, cranes fly south to Poyang Lake, China’s largest freshwater wetland sanctuary, along with hundreds of thousands of migratory wildfowl. For birds that feed on tubers of submerged aquatic plants, such as the critically endangered Siberian Crane, the threatened and declining Swan Goose, and thousands of Tundra Swans, Poyang’s food-rich winter wetlands are key to their survival. However, dams along the Yangtze River and growing floods are disturbing the natural rise and fall of water levels that are needed for Poyang’s aquatic plants to thrive. Poorly regulated and expanding sand dredging in the Yangtze River and Poyang Lake is increasing turbulence in the water, limiting light reaching the aquatic plants that migratory birds rely on.

In recent years, as part of President Xi Jinping’s emphasis on ecological civilization and strengthening biodiversity protections, the Chinese government has put in place a number of policies to address the growing development threats to wetlands like Poyang. Requirements for ecological restoration, bans on coastal land reclamation and fishing, as well as crackdowns on construction in nature reserves are all encouraging developments that Chinese conservationists have long been calling for.

Unfortunately, these policies are being exploited for other ends that do not necessarily improve the ecological environment. For example, local governments are carrying out “ecological restoration” projects that replace vital intertidal flats with new “pristine sand beaches” or “water conservancy projects” that aim to stimulate local economic growth such as expanded tourism or agricultural crops. Such projects are used to justify dams at Poyang Lake that threaten wetland biodiversity, especially migratory waterbirds. To prevent such harmful solutions, China’s conservation policies and regulations need stronger oversight and importantly more local flexibility and community engagement. 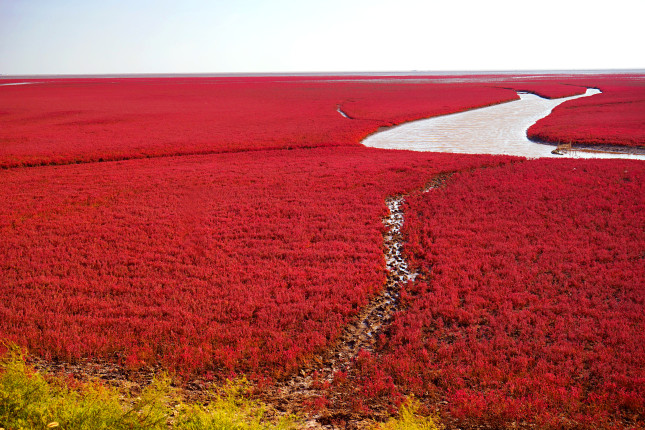 Each autumn thousands of tourists visit the Red Beach of Panjin in northeast China to witness the vibrant colors of the coastal Liao River Estuary National Nature Reserve. The red color of the extensive salt marshes comes from the native shrub-like seepweeds and sea-blites (Suaeda). The salt marshes provide important feeding resources for migratory Red-crowned Cranes and nesting habitat for rare Saunders’s Gulls. Such saltmarshes used to be found all along China’s Yellow Sea coastline. However, in recent decades, these natural marshes have been lost through a combination of coastal wetland reclamation (now banned) and the relentless advance of an aggressive alien plant—smooth cordgrass (Spartina)—that forms dense carpets of tall vegetation that exclude other plants and change the nature of the soil. Invasive cordgrass reduces the diversity and abundance of the rich benthic communities (i.e., plants and animals living at the bottom) of the salt marshes, as well as adjacent tidal mudflats that once supported thousands of migratory shorebirds.

The good news for China’s degraded coastal saltmarshes and tidal flats lost to invasive cordgrass is that widely available herbicides are very effective in controlling and eradicating the invasive. Happily, the herbicides do not harm the benthic communities and the ecological environment. This clears the way, quite literally, for recovery and restoration of native saltmarsh habitats and the red beaches. Since eradication requires comprehensive approaches to prevent recolonization, it is critical that nature reserve managers and local and national authorities are committed and coordinated in their strategy.

A 2018 ban on reclamation of coastal tidal areas has been instrumental in conserving important coastal ecosystems like these, leading to their inscription as World Heritage sites under the UN’s Migratory Bird Sanctuaries along the Yellow Sea and Bohai Gulf initiative. These protections are important, but more needs to be done to resolve clashes between nature reserves and local development.

Every autumn, exhausted and hungry flocks of Siberian Cranes arrive at wetlands in China’s northeast after their marathon journeys across the Russian boreal forest from breeding grounds on the Arctic tundra. They seek extensive areas of shallow water where they can feed by day on tubers of emergent wetland plants and roost safe from predators at night. Historically, such wetlands were widespread in the rather arid lands of the region, but rapid development of agriculture and infrastructure have put pressure on water resources.

At Poyang Lake and other wetlands, the International Crane Foundation (ICF), has been working with local fishing communities to manage water levels at small lakes to favor both fisheries and habitat creation for cranes. The risk is that without incentives for farmers to manage water levels for fisheries, sluice gates may remain closed, creating deep water lakes or open, draining lakes altogether.

Xi Jinping has predicated the development of the Yangtze River Economic Basin initiative on maintaining the ecological integrity and restoration of the river ecosystem and instituted a ten-year fishing ban. The ban could help many fish species bounce back, strengthening biodiversity. However, the ban has been hard on fishing communities. Programs could be set up for local fishermen to promote sustainable small-scale fisheries that support ecological restoration and keep rural economies healthy. By fine-tuning water management in lakes, ideal conditions for migratory birds can be created.

The Yangtze River fishing ban also covers crayfish and crab farming, forcing farmers to abandon their farms and leading to the escape of crayfish, which are expanding rapidly into natural wetlands, devouring all the aquatic vegetation vital to the ecological health of the wetlands and food for many migratory bird species.

In nature reserves in northeast China, bans on any infrastructure mean that even the small modifications to aging water control structures that are needed to restore shallow wetlands for cranes are prohibited. The International Crane Foundation has worked with Momoge and Xianghai Nature Reserves to mimic natural wetland processes that include vegetation management, periodic drying, and re-wetting and managing water flows, to create shallow wetlands with sedges that cranes feed on during migration seasons. The recent blanket infrastructure bans, however, hinder such projects and mean wetlands are left to either dry out or become choked with reeds, neither of which help the key species the reserves are trying to protect.

Some argue that policies should be applied strictly for equity reasons, and that exceptions may set a precedent and a perceived weakening of the intent of policy measures. However, with a little local flexibility, small tweaking—like helping farmers and fishers become leaders in protecting vital crane habitats—could help achieve ecological policy objectives and avoid the unintended negative impacts associated with blunt policy implementation.

Spike Millington is Vice President and Director of Asia for the International Crane Foundation, based in Wisconsin. From 2012-2017, he was Chief Executive of the East Asian – Australasian Flyway Partnership, conserving migratory waterbirds in the 22 countries of the Flyway and from 2005-2010 was UNDP Chief Technical Advisor for the EU-China Biodiversity Programme.