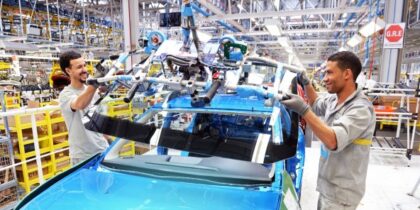 Morocco has achieved two years ahead in 2018 the goals it pinned on the automotive industry, notably in terms of turnover, exports, local sourcing and jobs.

Thanks to an ambitious industrial acceleration plan that spurred public-private partnership and encouraged investments by global suppliers, Morocco’s automotive industry achieved the goals set for 2020 two years ahead, making a turnover of 80 billion dirhams in 2019 and 72 billion dirhams in 2020 when the industry was hit by the pandemic.

The sector could recover its pace this year growing 42.8% up to June posting exports worth 42.3 billion dirhams, according to the foreign exchange data.

Speaker at an event on Morocco’s automotive headway, industry minister Moulay Hafid Elalamy said Morocco’s car exports exceeded by one and a half those of phosphates.

He said the group aims to increase the percentage of parts produced locally to 80% and to spend up to 3 billion euros annually, benefiting local suppliers.

Morocco, which has outperformed South Africa as the continent’s top car maker, also looks to benefit from the delocalization that is triggered by the coronavirus as manufacturers see in Morocco a more competitive destination for investments compared to India and China.

North Africa Post’s news desk is composed of journalists and editors, who are constantly working to provide new and accurate stories to NAP readers.

How to fight climate change — and cope with anxiety about it

How to fight climate change — and cope with anxiety about it