Long Beach residents have used the 2.5-acre community garden to grow their own food on elevated farm beds since 1996. In 2008, an agricultural program called The Growing Experience began using the remaining 4.5 acres of farmland to sell freshly-grown produce to families of the adjacent Carmelitos low-income housing community.

But today none of The Growing Experience’s educational programs are being offered while officials look for someone to host them, county officials said.

Holly Carpenter, who worked on the farm as a project manager for over five years before stepping down last October, said she was disappointed to hear the program was not going to receive adequate funding moving forward.

“That was really shocking and heartbreaking,” she said. “We had previously hosted Housing and Urban Development Secretary Ben Carson there, and the sentiment then was we are doing an awesome job.”

The programs aimed at empowering youth, especially low-income teens, was a major motivator for Carpenter.

She helped organize a program called the Young Creative Micro Enterprise club that taught children and teens how to grow their own produce and sell it. One year, the kids made and sold spicy kale chips from kale they grew on the farm.

Officials from the Los Angeles County Development Authority, which oversees the urban farm, said the county is no longer receiving adequate amounts of revenue needed to continue to fund the farm and pay for its staff.

“We have been keeping the garden and urban farm afloat using primarily public housing revenue streams that are not sufficient to continue operations at the same levels as prior years,” development authority spokeswoman Elisa Vasquez said in an email.

It costs about $500,000 to operate the farmland annually, Vasquez said, and the Housing Operations Division, which manages the public housing program and the Growing Experience, has had a $5 million funding gap that continues to grow.

The county has not determined how the farmland may be developed, Vasquez said.

“We are exploring other possible uses for the site,” Vasquez said. “But there has not been any decision made as to the final disposition of the site.”

For over a decade, the Growing Experience also provided agricultural programs for school-aged kids and teens to learn about urban agriculture and food sustainability.

Vasquez said that despite the slash in funding, The Growing Experience will continue, though it will be downsized due to staffing cuts.

During her time on the farm, Carpenter admitted that funding was already becoming an issue in maintaining the programs.

“It’s been running on a skeleton crew since I’ve been there,” she said. “It seems the agency has not prioritized the farm.”

The Growing Experience was awarded a federal grant in late 2019 of more than $83,000 to purchase a food truck that would have been used to promote the farm’s fresh yield throughout other areas of the city.

Carpenter said the county “took a huge step back” and returned the grant money to the U.S. Department of Agriculture. They “pulled the plug” and decided not to go through with the food truck project, Carpenter said.

County officials decided to return the funding to the USDA once they realized that they could not sustain the farm, adding that it was prudent to go through with the farm truck and grant, Vasquez said.

The news about the farm’s lack in funding has struck a blow to devoted community members and former employees who worked to develop the Growing Experience and the programs it provides. 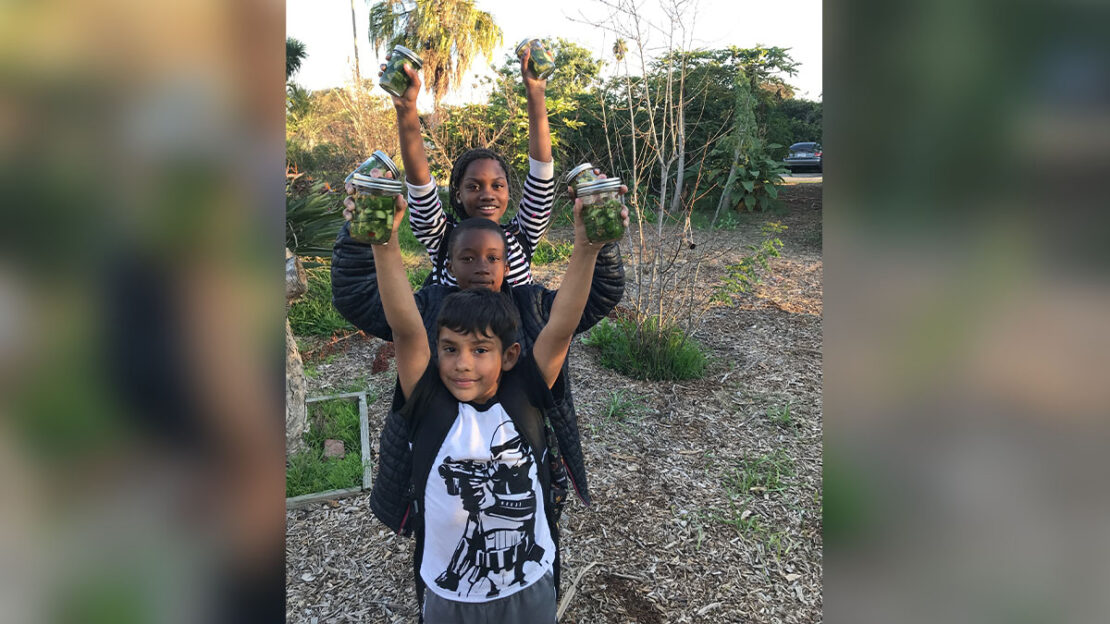 Children from the Carmelitos housing community participating in a STEM program to make fresh pickles from the farm. Courtesy photo Holly Carpenter.

The greenspace had allowed Dana Buchanan and her husband Chef Paul of Primal Alchemy Catering to host outdoor community dinners that quickly grew in popularity.

The couple co-founded the Long Beach Urban Farm dinner in 2009 to provide a space for chefs who specialize in fresh and sustainable foods to cook for guests with the proceeds going back to fund the farm.

The pandemic prevented the annual dinner from taking place last year, but in 2019 about 24 chefs participated in the outdoor dinner where 300 guests attended. There was wine, craft beer and multiple courses of freshly-cooked food, Buchanan said.

“It’s sad, because there’s not a lot of open space, especially in that area,” she said.

Buchanan and local agricultural groups such as Long Beach Fresh have met with county officials to come up with a solution to continue to run the farm as it had been originally intended.

“While there seems to be interest at the county level in supporting some programming for the next one to three years, the reduction in staff is a huge loss in talent and resources,” Long Beach Fresh co-director Tony Damico said in a statement. “Growing Experience represents more than 70% of the activated urban farm space in Long Beach.”

One solution they are working toward is to create an independent group that could support the farm financially through grants and other means of funding. Buchanan said the county has not told them what they want to build on the farmland, but she said they have shown interest in plans for future development.

“We’re trying to put together a group of people to keep it going,” Buchanan said. “Even though it’s county property, we’d like to see it run by people who’ve been involved in it.”

Vasquez said the county is exploring the possibility of continuing the urban garden either at its current location or maybe somewhere else.

Jimmy Ng, former project manager who worked on the farm until 2017, said he was concerned over the county’s lack of transparency regarding the future of the farmland.

Ng lived in Long Beach for over 20 years before moving to the East Coast, and worked with housing development since 1996. He was the first project manager to lead the Growing Experience when it first began.

“For me, it was really shocking,” he said. “No clear decision—not being very transparent about what’s happening next is very difficult to accept.”

Buchanan is planning to host a chef dinner this year with all the proceeds going back to the chefs who were impacted by the pandemic, but with the uncertainty of the farm looming over her head, she’s decided to rent out a different space.

“It’s going to be developed,” Buchanan said of the farm. “It’s just a matter of when.”

San Luis Obispo aiming to be carbon neutral by 2030