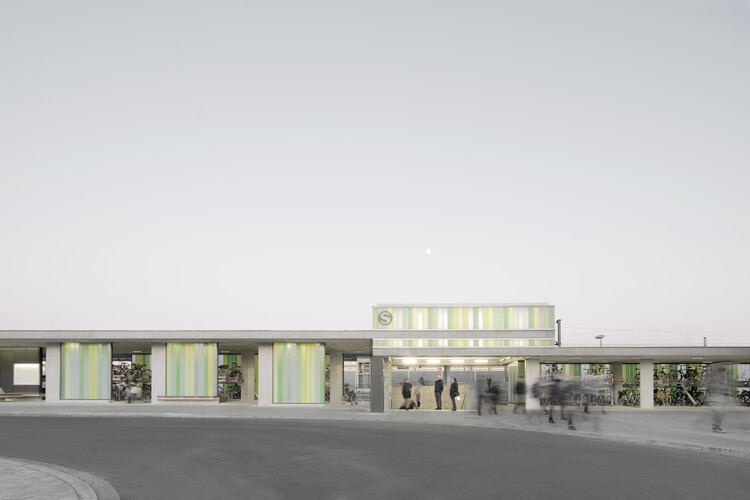 Text description provided by the architects. Oertelplatz, a square in the Allach area of Munich, is a new development providing the quarter with a new urban heart and transportation centre. Bordered to the east by the railway and an industrial area, to the south by a new commercial mall, and to the other sides by smaller residential buildings, Oertelplatz is divided into two separate areas. To the south, the urban square functions as a marketplace, with terraces for cafés and restaurants, and as a meeting place next to the fountain or under the trees.

The north part is the node for all modes of transport – a bus station, a station for the suburban railway, a bicycle park, a taxi rank, a drop-off point for cars, and a large underground park and rides car park.

The task was to integrate all these transportation elements and to form them into an architectonic design that would give an urban framework to the many traffic spaces and make these pleasant and legible.

The main part of the design is a roof of length 100 m which lies parallel and analogue to the platform roofing of the railway station. The roof and the colourful glass walling are arranged in two different heights, with the higher part forming the urban edge of the square. The point where the two roofs overlap is marked by a lantern and emphasizes from afar the entrance to the station. In the centre of the square, a winding curved roof covers the ramp to the park and ride garage.

The long roof shelters waiting for areas for the bus station with bicycle stands for 448 bicycles, space for cargo bikes, motorcycles, trailers for children, and a charging station for e-bikes. The roof supports photovoltaic panels, which directly power the lighting of the mobility hub.

The distinctive green profile glazing seeks to provide a colorful edge to the otherwise grey transportation area. The glazing is structured with a linear pattern: the prismatic surface treatment means that the colours appear vividly directly from the front, whereas the oblique view results in a much more silvery pastel appearance. The vertical linear structure of the glass is also imprinted into the sides of the surface of the concrete roofing by formliners laid into the shuttering.

In the evening hours, the walls glow as they are illuminated from behind by artificial lighting.

The doubly-curved roof of the ramp carries a flower meadow which is tilted up to be seen from the urban square to the south. Here, the top surface is green, while in contrast the sides, also in profile glass, are left colourless in differing degrees of transparency.

The distinctive five-sided column form appears very thin from one side and thicker from the other and was developed to integrate the profile glazing. This forms a translucent wall, which at once defines an edge to the square and also hides and organizes the bicycle stands. A dynamic information system, seating in prefabricated concrete and showcases are perfectly integrated with the columns.

Delta continuing to prepare for and adapt to climate change

A framework to decarbonise the economy

A framework to decarbonise the economy