Concord Sky at Yonge and Gerrard will have gear-room, dedicated bike elevators and lockers 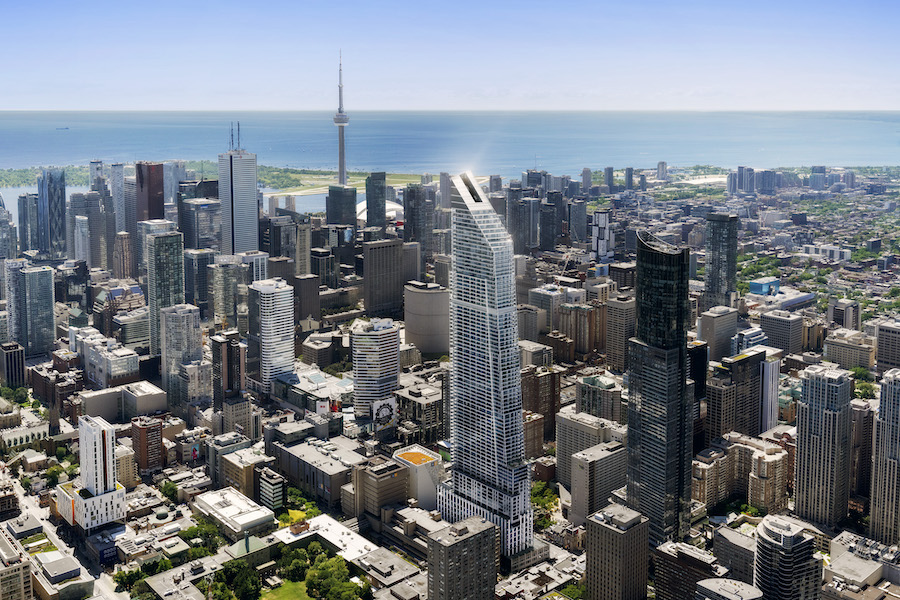 Concord Sky, the condo tower arriving at the corner of Yonge and Gerrard in 2026, is appealing to the Toronto bike community with planned cycle friendly amenities.

Concord Adex announced details earlier this month regarding the new condo, which will be among the tallest towers piercing the Toronto skyline at 299 metres, looking up to The One at Yonge and Bloor and the Sky Tower at One Yonge among others – all a quick bike ride away.

“Cycling is one of the fastest-growing forms of sustainable transportation in Canada,” said Isaac Chan, VP Sales and Marketing at Concord Adex, in a statement. “Older, existing condominiums only provided bike racks within common areas and these weren’t well designed and secured. At Concord Sky, we wanted our residents to focus on the joy of riding their bikes by providing them with the conveniences of our bike-friendly amenities.”

Those amenities include a gear room with shared tools for residents to tune their equipment (not just bikes but also skis and snowboards), a washing station; devoted lockers for cycle storage and a dedicated bike elevator.

The announcement comes two years into the pandemic, which deterred TTC ridership and commuting to the office but saw bike ridership spike. The city implemented its ActiveTO plan, expanding cycling networks with new dedicated bike lanes along Yonge, Bloor, Danforth and more. Earlier this month, Bike Share Toronto reported record use with over 3.57 million rides in 2021, which is up 23 per cent over 2020, and a 34 per cent membership growth.

Along with bikes, the Toronto condo will also be accommodating electric vehicles with quick charge stations at all its parking stalls.