Opinion: The fox running onto the ASU football field symbolizes a larger issue 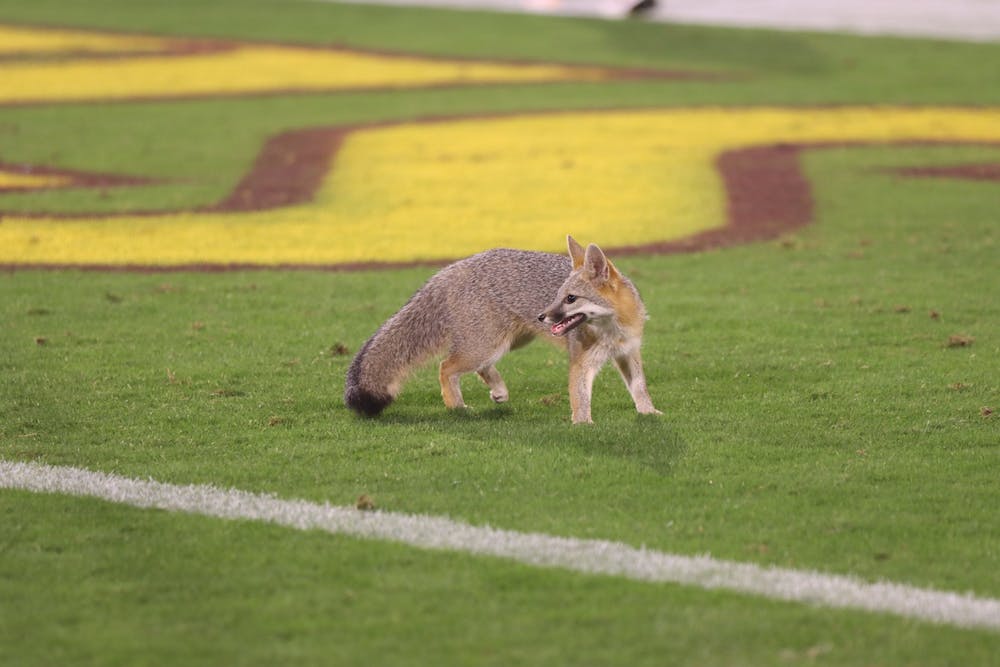 A fox runs onto the field at the beginning of the first quarter of the ASU football game against USC at Sun Devil Stadium on Saturday, Nov. 6, 2021.

In the midst of ASU’s football game against the University of Southern California in early November, a fox ran onto the field. The game paused, the crowd was in awe, and it began trending on social media immediately, even before my friends at the game could send me their own photos of the fox.

Seeing the fox on the field reminded me of when I watched a cat run onto a baseball field in LoanDepot Park in Miami. Both the cat and the fox running onto their respective fields gave me similar feelings of sadness and guilt toward the animals.

As comical and interesting as it was, the fox running onto the field symbolizes something bigger. Humans have been taking over wildlife habitats for a long time now, so it was only a matter of time before an animal interfered with an urban environment.

According to Karen Bradshaw, a professor of law at the Sandra Day O’Connor College of Law who focuses on environmental law and has written a book on animal rights, people’s coexistence with animals is crucial to the future of humans and animals alike.

“Our continued existence depends on theirs — biodiversity loss is a hidden crisis and one of the biggest threats to humanity. We are intertwined with every other living thing on earth,” Bradshaw said.

Biodiversity loss occurs when there is a decrease in biodiversity within the earth and, according to Bradshaw, is one of our biggest threats to humanity. Biodiversity provides ecosystem functions that are vital and irreplaceable if lost, such as soil fertilization, tree pollination and erosion control to name a few. It is important for humans to both take care of and share space with wildlife to avoid furthering biodiversity loss.

“Perhaps the fox was a very public reminder that wildlife always coexists with humans, everywhere, even in the most human of spaces,” Bradshaw said. “Maybe it was a symbolic invitation for current ASU students — who will become the future leaders in the state of Arizona — to consider a new way to understand our campus, community and world.”

There are plenty of ways the ASU community can use its skills in innovation to develop creations where wildlife and people can share a common space. Bradshaw said she “would love to see public spaces at ASU transformed to practice and model cutting-edge environmental soundness,” and believes that ASU students, staff and alumni have the brains and creativity to make positive strides in this direction.

Wildlife as we know it is constantly changing and moving as a result of human destruction, which is sad and unsettling, especially considering wildlife and biodiversity are necessary to keep the world going. Shrinking wildlife’s space will continue to cause biodiversity loss, threatening humanity as we know it.

It is important for humans to grow and prosper, but not when we try to take the place of wildlife. Every animal and plant plays an important role on this planet and the damage we as humans are making to wildlife can’t be erased. Right now is too late to completely fix the damage humans have caused, but it is better late than never to start at all.

Editor’s note: The opinions presented in this column are the author’s and do not imply any endorsement from The State Press or its editors.

Want to join the conversation? Send an email to opiniondesk.statepress@gmail.com. Keep letters under 500 words and be sure to include your university affiliation. Anonymity will not be granted.

‘That Glacier Is Gone.’ Filmmaking as Front-Row Seat to Climate Change