The SADC region is developing its renewable energy sector despite limited funding for renewables capital. However, if SADC is seeking to lower emissions and increase renewable energy supply by 2040, progress is delayed by various barriers.

As South Africa looks to diversify its coal-dependent energy supply, financial institutions are also looking to divest from coal and chase good returns in the environmental, social and governance space. Capital for environmentally just projects has been growing in recent years. Africa, however, and more particularly the Southern African Development Community (SADC) region, has been getting the short end of the stick when it comes to accessing financing to develop their renewables energy sector.

SADC has been receiving $1-billion from Development Finance Institutions (DFIs) each year towards the development of renewables for the past decade. However, Laura Cozzi, chief energy modeller at the International Energy Agency said in a panel discussion that $1-trillion was needed from the developed world to assist emerging countries to scale up renewable energy supply.

Existing funding has been coming from various multilateral and financial institutions regionally and globally. A third (33%) of funding for renewables in the SADC region has come from the Export-Import Bank of China (CHEXIM) which is a main financier, followed by the Brazilian Development Bank, financing 15% of renewable projects in the region and the Development Bank of Southern Africa at 13%. 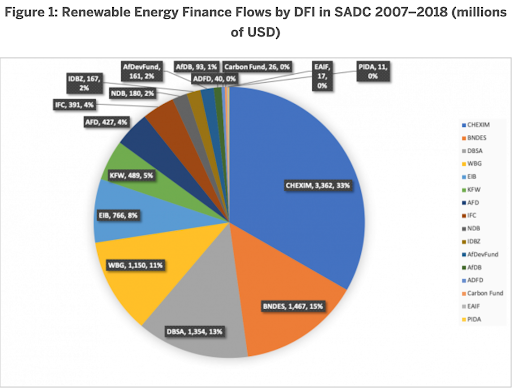 Saliem Fakir, executive director of the African Climate Foundation (ACF), told Daily Maverick, “SADC is generally a relatively good investment destination and viewed positively because of its good solar, hydro and wind resources.” He added, however, that funding has been set back by funds that were diverted to dealing with the Covid-19 pandemic.

An uptick in renewable energy is necessary as the SADC region experiences intense climate change consequences, while access to electricity remains at 50%, with some countries at 20% access.

The region has been moving towards renewables at a scale of 1.5GW per annum, falling short of its goal to reach 2.8GW each year by 2040, if SADC is to attain its 53% installed renewable energy target. The current rate would place the region at less than 50% of its target by 2040, putting it at an additional 28.5MW.

As the leading Greenhouse Gas (GHG) emitter in the region and the continent, South Africa is also the leader of renewable energy in the region. Striking a balance between decreasing emissions and increasing renewables has been explored through the Integrated Resource Plan (IRP), which seeks to diversify its energy supply to include “cleaner” and renewable energy options.

The Renewable Energy Independent Power Producer Procurement Programme (REI4P) has seen five rounds of bids since it was implemented in 2011. REI4P has ambitions of installing 17.8GW of renewable energy by 2030. So far,  the programme has generated about 6,300MW across 92 projects, with R80-billion invested.

About a month ago, President Cyril Ramaphosa announced a tenfold increase in licence exemption for renewable energy self-generation, compared with an announcement earlier in the year from the energy minister Gwede Mantashe, allowing for 10MW of generation. This potentially adds 5,000MW embedded power to the national grid.

To achieve its Nationally Determined Contributions (NDCs) by the targeted 2030, South Africa alone would need R8.9-trillion (from the year 2015). Annually, this amounts to R596-billion.

Regionally, SADC member states have set a target to achieve a diversified energy supply, with renewables consisting of at least 32% by 2020 and 39% by 2030. As of 2016, renewables made up 23.5% of power generation.

According to Kajee, SADC is susceptible to extreme weather events — floods, droughts, fires, large storms — that have cost the region an estimated $10-billion between 1980 and 2015.

Earlier this year, Namibia launched the Namibia Investment Promotion and Development Board (NIPDB), which is “playing a big coordinating role around hydrogen and renewables”, Fakir said. The NIPDB, alongside renewable energy developments in Botswana, could add 500MW to the regional grid, according to the executive director.

A major contributor to renewables in the region is hydropower. In 2017, the region generated 13,223.5MW, making up 21.01% of regional capacity. The Democratic Republic of Congo (DRC) has the largest generation of 2,442MW. Angola, DRC, Malawi, Mozambique, South Africa, Tanzania, Zambia and Zimbabwe follow as other leading hydropower contributors in the region.

Solar energy is led by South Africa and Namibia, with the two countries being the only on-grid producers of solar. In 2017 1,841MW (2.93%) of on-grid power was generated, of which 1,821MW was generated by South Africa and the other 20MW by Namibia. Off-grid, independent power producers are making significant strides in increasing dependence on solar energy, with solar expected to contribute 7% to renewable energy by 2022.

Wind energy represents an untapped market in the region and the continent. Power generated by wind energy makes up less than 1%, with South Africa being the only on-grid generator. The limitation of wind energy to coastal areas is among the main reasons for low generation. 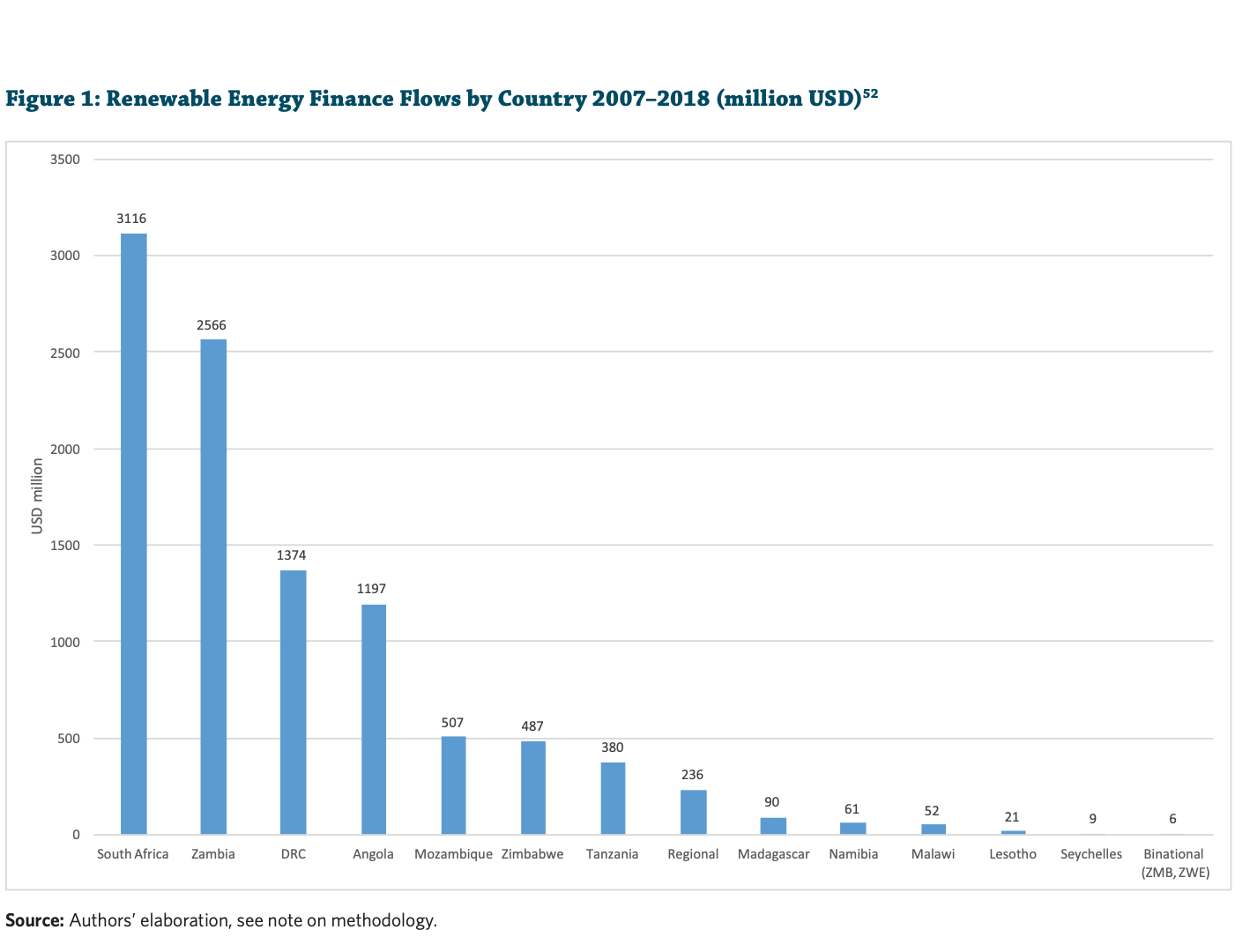 Tanzania and South Africa lead the region when it comes to biomass fuel made from agricultural waste, with an estimated 9,400MW in the region. As far as geothermal energy (steam used to generate power from the heat of the sub-surface of the earth) is concerned, the region generates about 4,000MW of electricity from along the Rift Valley of Tanzania, Malawi and Mozambique.

Developments and investments into the green energy sector in the region are on a slow, but steady track as countries seek to achieve 53% renewable energy capacity by 2040 and to achieve zero carbon growth in the fast approaching future.

Funds such as the Facility for Energy Inclusion (FEI), which is a $500-million fund sponsored by the African Development Bank, is targeted at improving energy access by developing small-scale renewable energy generation and mini-grids across the continent. Of this fund, $100-million is dedicated to off-grid energy access to support off-grid energy distribution companies and boost access to further capital.

As funds for the renewable sector increase, there have been divestments of fossil fuel energy supply such as coal. Earlier this year, a Brazilian corporation announced it was pulling out of coal production in Mozambique as part of its climate emergency commitment.

South Africa is considered risky by investors as energy supply by parastatal Eskom has been unstable since 2007. Coal divestment has meant that funds to keep the country’s main energy generator afloat have been limited, resulting in rolling blackouts, or load shedding.

According to Kajee, the region needs to transition to cleaner energy sources as the world turns to renewable energy, or face the costly risk of stranded assets that could end up further costing the public purse.

Globally, financial institutions have a collective of $11-trillion under management that will no longer be used to fund projects that contribute to climate change.

“We are starting to see more and more financiers back out of fossil fuels including in Africa, and we need to ensure the transitions are just and fair, leaving nobody behind,” Kajee said.

At least 50,000 workers are employed by coal mines that supply national utility Eskom, with more than 100,000 employed in the overall electricity generation process. While these jobs provide a lifeline to dismal unemployment rates in South Africa, communities around power stations are starting to demand jobs that don’t come at the expense of their health; a consequence of generation pollution — suggesting a tie between meeting regional renewable targets and a just transition.

While divestment has meant that there is an additional supply of capital towards renewable projects, African countries — in this case the SADC region, face several challenges to accessing this capital. Some of these factors include higher interest rates and upfront capital, higher risks, lack of capital and high debt, among other factors.

Financial factors, alongside a lack of policy or regulatory certainty and failing technology, create barriers to boosting renewable energy investment in the SADC region, Kajee said.

According to Fakir, the main challenge with scaling up renewables in the region are debt-ridden utilities such as Eskom, that need new infrastructure investment.

“So, the utility scale matter is largely dependent on the ability of the off taker, which is the utility, and their financial situation or creditworthiness,” Fakir said.

Among other factors to consider to scale up renewables in the region, says Fakir, is depending on private firms and households to distribute generation where the state fails to finance its projects. He says the Southern African Power Pool (SAPP) should look beyond its mandate of exchanging electricity.

“If the SAPP can be a major driver of investments, this will help to integrate renewables in a full regional framework rather than just at a national level. This will also create a stronger case for investment within the SADC region,” Fakir said. DM/OBP

Republish our articles for free, online or in print, under a Creative Commons license.