Scoop: The Obama scandal Biden wants to bring back


With help from Myah Ward

THE SOLYNDRA SOLUTION — Climate hawks want to do more. Deficit hawks want to spend less. So as Congress and the Biden administration draft their next batch of trillion-dollar bills, there’s renewed interest in a long-dormant funding vehicle that’s climate-friendly and budget-friendly enough to appeal to both kinds of hawks.

The political twist is that the vehicle is the Department of Energy’s Loan Program Office, best known for its ill-fated half-billion-dollar loan to the solar manufacturer Solyndra. The office hasn’t made a single loan since Solyndra went bust a decade ago.

But sources tell POLITICO Nightly that the Biden administration is working with congressional Democrats to harness it to accelerate the clean-energy transition.

But the loan program also has fiscal appeal, because under congressional accounting rules a dollar of government lending can count as just a penny of government spending, which could help get more bang per budgeted buck into the bipartisan infrastructure bill being crafted on the Hill.

That’s because most Energy Department loans, unlike the Solyndra debacle, are repaid with interest. The department actually turned a profit on the $30 billion it lent to various clean energy initiatives after President Barack Obama’s 2009 stimulus bill, with a default rate of less than 3 percent. And the office still has $40 billion in unused lending authority, because it basically shut down after the brutal political backlash to Solyndra. Energy Secretary Jennifer Granholm has vowed to start taking risks again, and Biden sent a strong signal of support when he appointed the well-respected clean-energy entrepreneur Jigar Shah to run the loan office.

Granholm and Shah made a pitch to congressional staff last week, and sources say several proposals to funnel cash into lending programs are now floating around the Hill.

For example, Sen. Joe Manchin of West Virginia, the chair of the Energy Committee and the arbiter of what Democrats get to pass these days, has circulated language authorizing $2.1 billion worth of loans for pipelines that help sequester carbon dioxide. A provision like that could add as little as $21 million to the price tag of the bipartisan infrastructure bill.

Manchin also wants to expand a lending program for fuel-efficient automobile manufacturing — best known for a $465 million loan that saved Tesla from bankruptcy in 2009 — to cover fuel-efficient trucks, buses, trains, boats and even Tesla founder Elon Musk’s concept of a people-moving “hyperloop.” His language suggested $8 billion in new lending authority, which could get a Congressional Budget Office score as low as $80 million.

There’s also talk that a $27 billion proposal to fund a nonprofit “green bank” that would in turn finance innovative clean-energy investments could instead be funneled through the loan office, which could reduce its price tag to $270 million without changing its basic purpose.

As the infrastructure talks continue, negotiators could find it tempting to use the loan office to finance everything from biofuels to batteries to green hydrogen projects.

Congress loves using credit programs that use the power of the federal balance sheet to reduce the cost of financing college, housing and even shipbuilding. It’s an efficient way to move money — unless there’s a wave of defaults.

“It’s already a wildly successful tool for driving the clean energy transition, no matter what people say about that one company that shall not be named,” said Sam Ricketts, co-founder of the climate policy shop Evergreen Action. “It can’t be the only tool we use, but it’s a great way to use the backstop from Uncle Sam to get money out the door.”

Solyndra will still loom over every federal clean-energy loan, and the next default will surely cause more blowback. The loan office has created a new risk management division to minimize the risk of future Solyndras. But lending is an inherently risky enterprise. As one Obama administration veteran points out, hardly anyone blames the government when Pell Grant recipients end up as drunks on the street, but when a big government loan goes bad, heads are expected to roll.

Then again, it’s hard to jump-start new industries without taking risks. The loan program helped create markets for solar and wind projects that now routinely attract private financing. Climate hawks like the idea of creating even more green stuff, and deficit hawks like the idea of exploiting budget rules to do it on the cheap.

A message from AstraZeneca:

Through COVAX, we are working with partners GAVI (the Vaccine Alliance), WHO (World Health Organization), CEPI (Coalition for Epidemic Preparedness Innovations) and SII (Serum Institute of India) to ensure people around the world have access to safe, effective COVID-19 vaccines, wherever they live and regardless of income level. Learn more here.

THE VIRUS INSIDE CUBA — Thousands of Cubans took to the streets Sunday to protest food and medical shortages, a dire economic situation exacerbated by the Covid-19 pandemic. The Cuban Ministry of Health said the country had nearly 35,000 active cases of Covid today.

Cuba reported 6,423 new cases and 42 deaths today, some of the country’s highest numbers to date — though these numbers have to be taken with “a very large grain of salt,” Steven Ullmann, the director of the Center for Health Management and Policy at the University of Miami, told Nightly’s Myah Ward.

“Cuba, in terms of its image — its political image, its economic image, its social image — wants to put out the concept that it is a country that has done well economically, and has done well with other factors,” Ullmann said. “But what we see sometimes is that once one delves more into the situation, the numbers are somewhat misleading.”

Cuba was successful at keeping the pandemic under control in 2020, but that was through drastic measures like closing the country’s borders, that curbed the spread of the virus while depriving key components of the economy, like tourism. Cuba was recording less than 200 new daily cases in December 2020.

As the country gradually reopened to outsiders in 2021, case numbers spiked.

Cuba’s health care system in many ways was prepared to take on the virus. The country has highly trained medical staff and a strong primary care system, with a much higher doctor-to-patient ratio than many other countries, Ullmann said. Cuba also has a well-developed pharmaceutical sector that produced two reportedly effective vaccines (although the vaccine data is also to be taken with a grain of salt, Ullmann said).

At the same time, Cuba doesn’t have the infrastructure to roll out shots to its more than 11 million people, Ullmann said. One of the country’s vaccines, Abdala, which Cuba says is 92 percent effective against Covid, is a three-dose regime. But Cuba doesn’t have enough syringes.

And even if the country acquired the supplies, it doesn’t have the infrastructure to always sterilize the syringes, which would cause other disease outbreaks.

“So far, 1 million in the population have gotten all three doses, as per the data coming out of Cuba,” Ullmann said. “But they have a much larger population to go still.”

More on Cuba: Biden expressed solidarity with protesters in Cuba before a White House meeting on gun violence with Attorney General Merrick Garland and local leaders. “The Cuban people are demanding their freedom from an authoritarian regime. And I don’t think we’ve seen anything like this protest in a long, long time — if, quite frankly, ever,” Biden told reporters.

And Secretary of State Antony Blinken said the U.S. was joining “partners across the hemisphere and around the world in urging the Cuban regime to respect the rights of the Cuban people to determine their own future, something they’ve been denied for far too long.”

— Top U.S. officials see booster shots as inevitable: Biden administration health officials believe the most vulnerable Americans such as elderly nursing home residents and people who are immunocompromised, including transplant recipients, will eventually need coronavirus booster shots — but they are still debating how quickly that should happen, two administration officials said. The internal deliberations have stretched on for months as health officials watch for signs of waning immunity among the vaccinated. The talks have included extensive behind-the-scenes coordination between the administration and drug companies manufacturing Covid-19 vaccines.

— Texas Dems flee state to stop elections bill: Democratic state legislators in Texas fled the state to deny Republicans in Austin the opportunity to pass new election laws, they said today. “Texas House Democrats stand united in our decision to break quorum and refuse to let the Republican-led legislature force through dangerous legislation that would trample on Texans’ freedom to vote,” a statement signed by caucus leaders read.

— FDA expected to add Guillain-Barre syndrome warning to J&J Covid shot: FDA is preparing to add a warning to Johnson & Johnson’s Covid-19 vaccine after receiving preliminary reports of patients developing the rare neurological condition Guillain-Barré syndrome after receiving the shot, a senior CDC official confirmed to POLITICO. About 100 suspected cases of GBS — among the 12.8 million people who have gotten the J&J shot — have been identified in the federal government’s database for adverse side effects after vaccination, the official said.

— Utah governor admits mistake on vaccination milestone: Utah Gov. Spencer Cox said today that the state’s Covid data team “screwed up” and that Utah has not yet hit the 70 percent goal for adult vaccinations, admitting the error just days after celebrating the milestone. “Welp. We screwed up. Because of a reporting error we have not yet hit 70% on our adult vaccinations,” Cox, a Republican, posted on Twitter. “I promised to admit our mistakes and hold us accountable. I hope you will forgive us — and know we have made changes to ensure it won’t happen again.”

— France’s Macron: Coronavirus jabs for health workers to be mandatory: French President Emmanuel Macron announced a package of new measures today to boost vaccinations and beat an impending fourth wave of Covid-19 infections. In an address on French television, Macron said the Covid-19 jab would be made mandatory for all staff working in French hospitals, care homes and clinics. 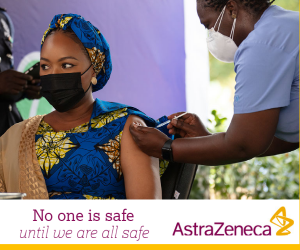 The length of time the Cybersecurity and Infrastructure Security Agency went without an official director. The Senate today confirmed Jen Easterly to lead CISA, filling a void at the top of an agency struggling to address widespread digital weaknesses inside the government and across the country.

CAN CONGRESS #FREEBRITNEY? There aren’t too many issues in Washington where you’d find Rep. Matt Gaetz and Sen. Elizabeth Warren on the same side. But one is a headline-grabbing story from far beyond the Hill: Britney Spears and the conservatorship system. In the latest POLITICO Explains video, Senate reporter Marianne LeVine looks at what, if anything, the House and Senate could do to fix the nation’s guardianship rules.

A message from AstraZeneca:

The COVAX initiative is an unprecedented effort to ensure fair and equitable global COVID-19 vaccine distribution. Through COVAX, many more shipments of the COVID-19 vaccine, including our own product, are planned over the coming weeks and months to low- and middle-income countries as the fight against the virus continues.

We have always understood vaccination as a global, no-profit, equity-focused undertaking and were the first pharmaceutical company to join COVAX in June 2020. Through COVAX and other global initiatives, we have supplied more than half a billion COVID-19 vaccine doses to 170 countries; 300 million of which have gone to low-income regions. Learn more here.

Did someone forward this email to you? Sign up here.