With wildfires and heat waves raging this summer across the U.S., it’s clear that the effects of climate change are situated squarely in the present tense. In Maine, the story is the same, with the annual temperature 3.2 degrees higher than it was in 1895, the Gulf of Maine heating faster than 99% of the world’s oceans and warmer winters making dramatic changes to the state’s ecosystems.

Against that backdrop, it’s clear that aggressive action is needed. But despite some important steps, advocates in Maine say not enough was accomplished during this year’s legislative session to meet the urgency of the moment.

“For me, it really fell short of expectations and aspirations,” Rep. Seth Berry (D-Bowdoinham) said of climate action during the session. “I think there was a lot more talk than there was walk.”

To begin addressing the climate crisis, Maine must quickly transition to clean electricity, Berry said. The most efficient way to do so, he explained, is to make clean electricity cheaper and universally available to consumers, which will require investing in the state’s electric grid. That’s why he argued it was a tragic misstep for Gov. Janet Mills to veto a bill to start the process of creating a consumer-owned utility in Maine.

That bill, LD 1708 — sponsored by Berry — would have been the first step toward establishing the Pine Tree Power Company, a consumer-owned utility that would have replaced Central Maine Power and Versant, the state’s unpopular investor-owned utilities. Under the legislation, voters would have decided whether to create the consumer-owned utility through a referendum in November 2021. In opposing the bill, Mills — a conservative Democrat — argued that the measure was rushed, even though the legislation was the product of years of work. The legislature then sustained the governor’s veto.

Berry said consumer ownership of Maine’s utilities is the only way to achieve the transition to clean electricity at the speed needed to address the climate crisis, pointing out that the first six communities in the U.S. to reach 100% renewable energy are all served by such utilities.

“In vetoing LD 1708, the governor effectively vetoed her own climate goals,” he said.

Mills’ office did not respond to a request for comment.

After Mills’ veto, Our Power announced it will soon begin gathering signatures to put the question of a consumer-owned utility on the ballot in November 2022. While the delay caused by the veto will give the coalition more time to prepare for the referendum, it’s a devastating setback from an environmental perspective, Berry said.

“It means we lose a year, and we don’t have time to waste,” he said.

Anthony Marvin, coordinator for the Sunrise Portland Maine hub, is also feeling the urgency of taking aggressive action to curb the climate crisis. Marvin said while a lot of good work was accomplished during this year’s session, the overall climate goals the state has set are not sufficient to meet the scope of the issue.

The state’s climate action plan centers around decreasing greenhouse gas emissions 45% by 2030, 80% by 2050 and making Maine carbon-neutral by 2045. But Marvin said the state needs to commit to addressing the crisis more quickly.

“We’re not moving fast enough,” Marvin said. “The climate action plan that the governor and the Maine Climate Council have put out, it points to timelines that are not at all compatible with how the youth climate movements see it.”

Marvin said youth environmental activists believe that a 2030 deadline for having systems in place to curb climate change is needed, rather than 2045 or 2050.

As a result, the current plan should be accelerated by the administration, Marvin said. However, Marvin added that the legislature also needs to step up and take aggressive action on climate, arguing that the steps thus far haven’t been sufficient.

“There were really big opportunities to move forward the climate conversation in Maine in a policy framework and we fell flat,” she said. “And that’s really disappointing.”

Specifically, Maxmin mentioned LD 1708 as a bill she’s disappointed didn’t pass. She also cited legislation sponsored by Rep. Scott Cuddy (D-Winterport) to require strong labor standards on renewable energy projects, which failed an enactment vote in the Senate, and a bill vetoed by Mills that would have banned aerial spraying of dangerous herbicide substances for the purpose of forestry management as other setbacks on the environmental front.

Frustrations with the governor

Ania Wright of Maine Youth for Climate Justice said some of the climate shortcomings this session stemmed from opposition by Mills, including the governor’s veto of a bill to ban companies at least 10% owned by a foreign government from spending in referendums — a measure that would have curbed the ability of some allies of the controversial CMP corridor from spending big money against a ballot initiative to prevent a project that opponents fear will be environmentally destructive. 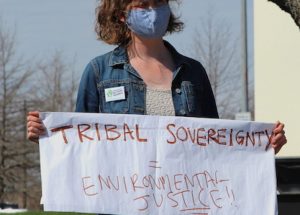 The governor also emerged as a barrier to the effort to reinforce tribal sovereignty, Wright said, with Mills vetoing a bill to extend gaming rights to the tribes. A larger measure — supported by a number of green groups — to reaffirm the Wabanki’s inherent sovereignty on their land and reinforce their right to set regulations, including on environmental matters, was tabled and carried over to next year’s session after Mills objected to the bill as written.

The governor also drew the ire of environmental groups for her veto of the bill to ban aerial spraying of hazardous herbicides such as glyphosate, which she said would hurt silviculture enterprises. Mills instead supported expanding buffer zones for such spraying and issued an executive order in late June directing the Maine Forest Service and the Board of Pesticides Control to review rules for aerial spraying of herbicides and recommend changes to those regulations to “further protect” humans, wildlife and natural resources.

But Rep. Maggie O’Neil (D-Saco) said opposition to the bill doesn’t make sense given the harmful impacts the substances have.

“It just doesn’t pass the straight face test. It’s not healthy or sustainable,” she said of aerial spraying. “For the [state], who is meant to be the regulator, to defend it is just shameful.”

Despite those disappointments and concerns that progress is not being made fast enough on climate issues, advocates also pointed to a number of important steps forward this session, particularly on creating a healthier surrounding environment.

Wright said a significant victory was a bill passed by the legislature and signed by Mills to divest state funds from fossil fuels. That measure made Maine the first state to commit through legislation to divest from dirty energy companies. Wright also cited the approval of legislation to create a green bank in Maine that will help finance a number of climate initiatives as an important bill to begin to address the climate crisis on “a systems level.”

O’Neil, who sponsored the divestment bill, added that significant progress was made to rein in the use of toxic pesticides, including a bill to ban chlorpyrifos — a pesticide that has been associated with developmental harms to children — and a measure curbing residential use of neonicotinoids, which are harmful to bees. O’Neil said the legislature also passed a bill establishing a healthy soil program in Maine and a package of measures to address issues posed by long-term toxic chemicals known as PFAS.

Beth Ahearn, director of government affairs for Maine Conservation Voters, said the session generated a number of important environmental victories, calling it “really extraordinary.” Among other priorities, Ahearn was particularly excited about $40 million in funding in the state budget for the Land for Maine’s Future program, which had been out of money.

“So it means there’s $40 million available for public access to beautiful places outside, and as we learned during COVID, people desperately need access to those places,” Ahearn said.

Ahearn added that the budget also allocated funding for positions in the Governor’s Energy Office and the Office of Policy Innovation and the Future, which have taken a leading role in the state’s response to climate change.

Another initiative Ahearn is excited about is legislation to reform Maine’s recycling program. She said many municipalities have stopped running recycling programs because they’ve been on the hook for the cost of product packaging. To address that issue, a first-in-the-country bill passed by the legislature and signed by Mills shifts the burden of that cost to the companies responsible for the materials, which environmentalists believe will facilitate increased recycling in cities and towns and encourage businesses to reduce waste.

An additional environmental win took place in South Portland, where residents celebrated a measure signed in late June to provide transparency about the impacts of petroleum storage tank farms in the city.

Given the strides that were made during this year’s session, Amy Eshoo, program manager at 350 Maine, said she has hope for Maine’s role in addressing the climate crisis.

“We got some major legislation implemented, which is a huge success,” she said. “Is there more to do? Yes. Are there disappointments? Yes. Do we have to increase the timeline [of climate action]? Yes. But that’s not to denigrate what we have been able to do and what Maine can do.”

Advocates and lawmakers say it will be crucial to keep climate change at the forefront of the conversation in future legislative sessions. Maxmin said one way to do that is through the Pine Tree Amendment, a measure she’s sponsoring that would amend the state’s constitution to establish the right of Mainers to a healthy environment. The legislation has been carried over to next year’s session.

Maxmin said the amendment would mean future legislatures and administrations in Maine would have to keep climate front and center, ensuring “our climate policy isn’t dictated by political whims.”

Activists also said maintaining grassroots pressure on lawmakers and the governor will be critical. Marvin said one important step toward that goal is getting additional young people into the state government to ensure aggressive action is taken on climate and that lawmakers understand the urgency of the crisis and how youth will be acutely affected.

Wright added that expanding who has traditionally been involved in the climate movement to create a more diverse coalition is extremely important, especially since she argued that grassroots organizing is going to be essential to “creating a robust climate movement that is really nimble and able to influence legislators.”

Given the state of the world, the impetus to take strong next steps to address climate change is clear, Berry said, arguing that it’s crucial to keep the generations to come in mind.

Top photo: Protesters at a climate protest outside the Maine Capitol in Augusta. | Andi Parkinson

Leading in an Era of Impact: How Bolsa de Valores de Colombia Is Expanding the ESG Ecosystem in South America

Leading in an Era of Impact: How Bolsa de Valores de Colombia Is Expanding the ESG Ecosystem in South America