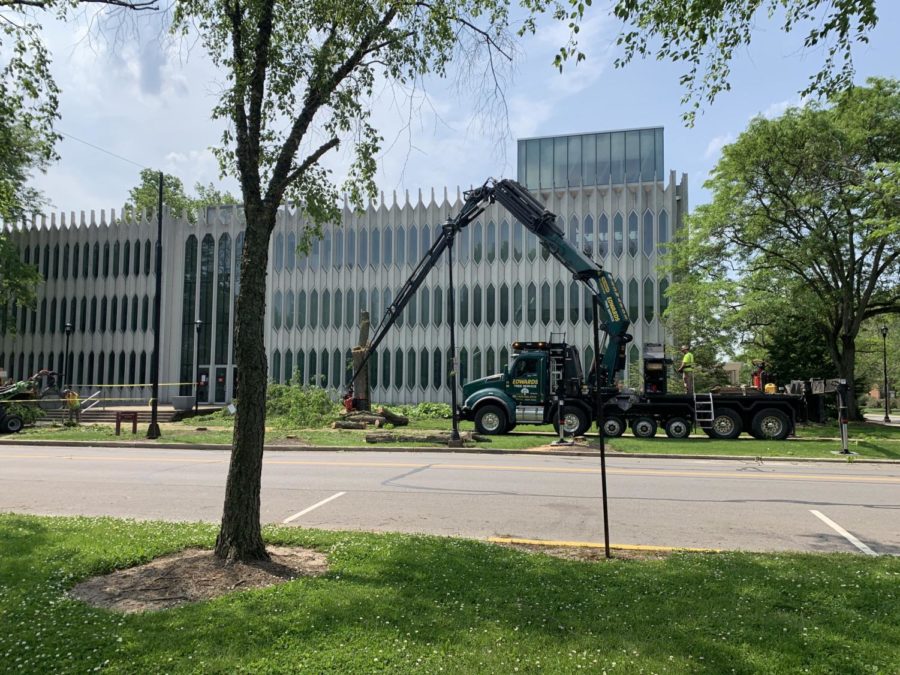 Over the last few weeks, nearly 100 trees have been cut down on campus to complete the Sustainable Infrastructure Program. As part of the plan, all trees will be replaced with trees native to northeast Ohio.

As students began their first few weeks of summer classes, 97 trees were cut down in Wilder Bowl, along West College Street, and at the intersection of North Professor and Elm Street. The trees needed to be removed in order to implement the College’s four-year sustainable energy project, which will replace deteriorating — and in some places century-old — steampipe infrastructure with a more efficient heating system.

According to Assistant Vice President of Campus Energy and Sustainability Meghan Riesterer, the trees were removed for students’ and residents’ safety and overall sustainability. The College plans to replace every tree it removes by the time the first phase of construction is completed in the fall. The $140 million sustainability project will also introduce a geothermal energy system that will eventually power the whole campus and bring the College within 11 percent of its goal to reach carbon neutrality by 2025.

Navigating Wilder Bowl has become a labyrinthine task, as excavators dig up the old steam pipes and replace them with a more efficient, low temperature heating system. Orange mesh and pedestrian signs weave a walkway for students to get around the torn up sidewalks. On South Campus, the mulched stumps of removed trees and their accompanying red and orange flags mark the path of the new heating system.

Riesterer also mentioned that the first phase of the project will end by fall semester. Over the summer, the steam pipes will be removed and replaced, with careful consideration of the impact excavating has on the trees around South Campus, as well as the safety of students and residents.

“The reason that you need to remove some of the trees that are in the distribution pathway is for safety,” Riesterer said. “When you do digging of any type in the ground, you compromise the root structure of the trees. That tree in a year, or five years from now, could become unsafe … and fall on a student or a pedestrian. And we cannot risk the safety of our students. We’re taking really extraordinary measures to save any tree that we possibly could in this project work.”

College third-year and TreeCo instructor Max Bauders says the decision to remove the trees is a realistic approach.

“Once trees get to a certain size, it’s a lot more traumatic to move them once they’re already really well-established in the ground,” Bauders said. “So I don’t think very many could have been transplanted. I mean, you can, but it would cost a lot more money for the College and I completely understand that they’d not want to spend that money.”

“There were honey locust, Callery pear trees,” Bauders said. “I think a few ginkgos were there, also.”

Riesterer states that the tree removals were carefully planned, with input from a hired arborist, Al Shauck, and a student advisory group. The College will redress the loss of many of these ornamental trees by planting trees more in line with the ecology of the area. It also plans to utilize as much wood from discarded trees as possible. Additionally, for every tree removed, the College promises to plant a new one this coming fall when the first phase of construction ends.

“It’s not just a blanket tree replacement, but we’re considering the longevity, the biodiversity, the tree canopy that makes sense for our campus — starting with Ohio native species in terms of those replacements,” said Riesterer. “Those old, large trees that were compromised are being hauled off-site, dried out for a year, and then we’ll mill those into productive wood for campus … and we’ll engage campus and ask for student input over how to best utilize that milled wood.”

Despite these sustainable efforts, President of the Oberlin City Council Linda Slocum acknowledged that the removal of the trees is a loss for the City of Oberlin. Slocum addressed some of the concerns Oberlin residents have had with the trees’ removal and suggested some positive actions in response.

“Over the last couple of years, we’ve planted over 200 trees,” Slocum said. “We’re a ‘Tree City USA’ here. This community really values trees. 97 trees are being cut down — how about the residents in Oberlin pledge to replace those 97 trees on their own properties?”

Riesterer also advocated for a positive outlook in the face of the externalities of this massive infrastructure project.

“The biggest thing to note is that when this work is all finished, we will have an incredibly beautiful campus with a much lower carbon profile than we currently have,” Riesterer said. “That will affect not just the city of Oberlin, but the larger region also.”

Students and residents interested in the progress and implementation of the Sustainable Infrastructure Program can visit carbonneutral.oberlin.edu.