Heads up, Tempe. The Green Machine is upon us.

Crews from Valley Metro, which have been “burning in” Tempe’s new lime-green streetcar vehicles on the light-rail tracks overnight since April, now have begun testing them on the 3-mile streetcar loop through the Rio Salado and downtown areas.

One obvious difference motorists will notice from light rail is that the streetcar shares lanes with general traffic. Also, modern streetcars are quieter than buses and light-rail trains.

“Obviously, it’s a new mode of transit for Valley residents, and the fact that it shares traffic lanes with cars is a new thing,” Valley Metro’s Madeline Phipps said. “We’re really glad to get the message out that they’ll see the streetcar out there for the next of couple of months in testing.

“It’s safe to drive in the same lane, for the most part, but drivers should follow the signage and keep back a safe distance. Treat it like any other vehicle. The streetcar will obey the same traffic signals as all traffic. The operator will stop at red lights. It will do the same things that cars do.”

The streetcar system is Tempe’s latest step in its quest to develop a multi-modal transit system that gets as many cars as possible off the downtown streets, where high-rise, high-density development exacerbates congestion.

“We are really excited about the streetcar coming into play in the city of Tempe, particularly to add to our regional infrastructure along with light rail and bus rapid transit,” said Tempe Mayor Corey Woods. “We are looking forward to doing everything we can to make sure our residents and visitors can get anywhere around the Valley without a car, if they choose to.”

Tempe received some good news on June 11, when the Federal Transit Administration announced a $17.4 million funding allocation for the streetcar from the American Rescue Plan. The money is in addition to $75 million in Capital Investment Grants the city received for the project in September 2019. 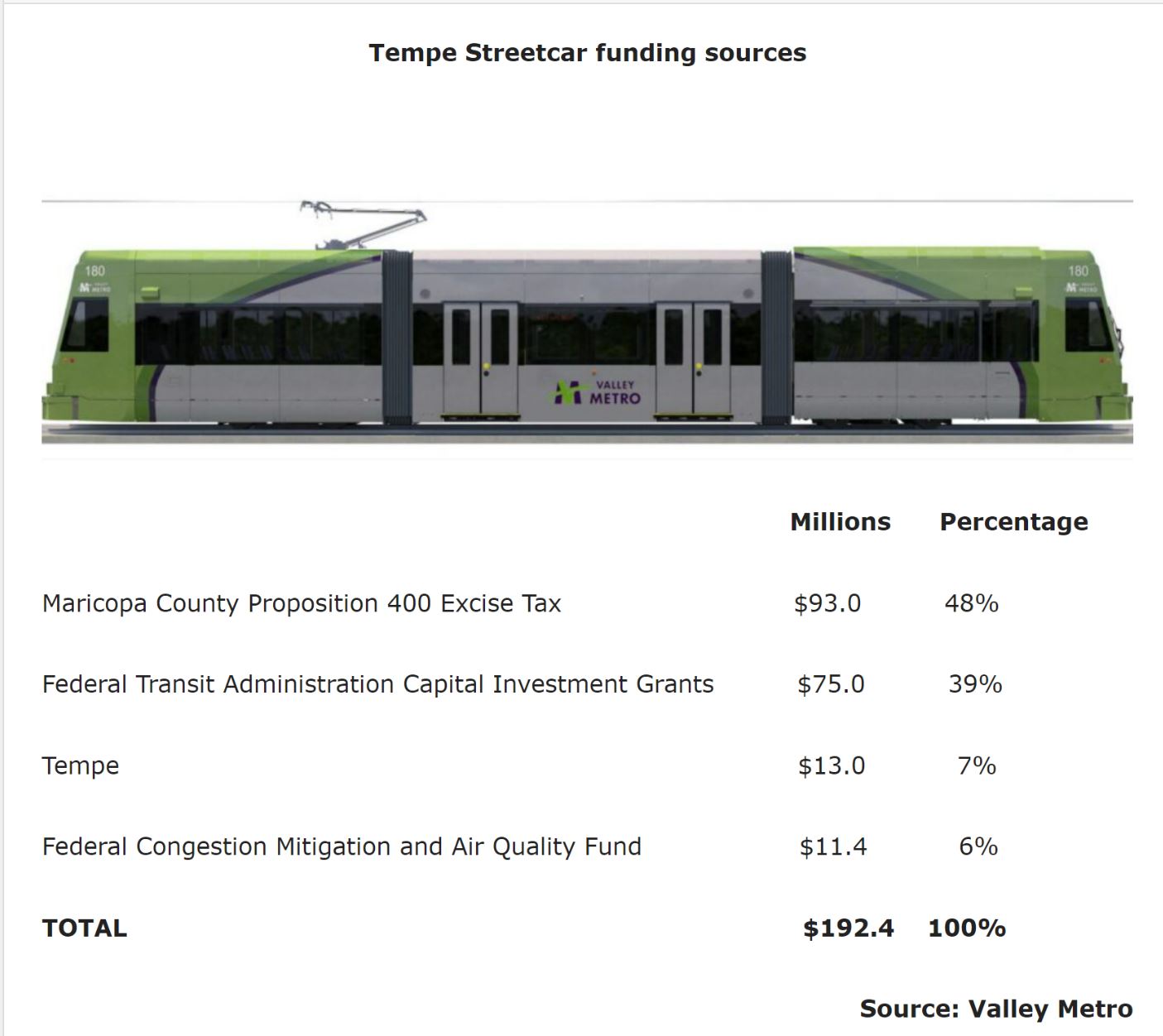 “Public transit opens new opportunities for people, and delivers environmental and economic benefits to communities,” said Pete Buttigieg, U.S. Transportation Secretary. “We are delighted to provide support for these projects, which will help communities recover from the pandemic and bring public transit to more people in the months and years to come.”

Tempe’s nearly $200 million system, more than a decade in the making, took a giant step forward on June 28 when the streetcar began test runs along the entire route in traffic in broad daylight. On June 8, crews conducted the initial test of the vehicle overnight on the route at a snail’s pace, with workers walking alongside, paying particular attention to how it negotiates the curves.

“Our first priority is operating a safe and reliable system,” said Adrian Ruiz, Valley Metro director of safety, security and quality assurance. “It’s not quite time to get onboard, but we want the public to be aware that they will observe and travel near the streetcars more frequently in the coming weeks.”

Valley Metro still has not set a rollout date for the service nor its fare schedule, according to Phipps, but it is expected to begin service late this year, she said.

Phipps said this round of testing is as much about the system and its infrastructure as it is about the streetcar vehicles, which already have run hundreds of miles in overnight testing, known as “burn in,”  on the light-rail tracks.

“Now we’re looking at how the vehicle works with the actual system,” she said. “They’ll be out there sporadically along the route in traffic for the next few months.

They’re also looking at how the vehicle transitions from overhead power to the segments of the route where it operates under its own power.

Valley Metro advises those who ride bikes and scooters not to ride between the rails because it is difficult to maneuver in the tight space and their tires could get stuck in the grooves along the track.

It also emphasizes that pedestrians should cross streetcar tracks only at designated crosswalks. The streetcars are quiet – much quieter than the light rail – so pedestrians must be aware of surroundings and the signals.

Two of the line’s six streetcar vehicles have been delivered. The next one is due this summer. Each has 40 seats. With standing room, a streetcar can transport roughly 120 people along the short-hop line. The cars are not linked like light-rail cars are. Each operates independently. The 72-foot long streetcar’s two hinges allow for tight turns and give the appearance of being three cars.

Also, streetcar stops are more like bus stops in that they are more frequent than light-rail stops. Tempe’s streetcar system has 14 stops, two of which connect to Valley Metro Light Rail. Existing street parking did not need to be removed except for the equivalent of three parking spaces at each stop and to clear adequate turning radius in some locations.

The Tempe Streetcar will have 14 stops along its 3-mile loop:

The first of the six streetcar vehicles, the Liberty NXT, was delivered in March from Pennsylvania-based Brookville Equipment Corp. Valley Metro purchased the six vehicles from Brookville, the only maker of streetcars designed and manufactured exclusively in the U.S., on a $33 million contract awarded in 2017.

There were challenges designing a system to operate on streets shared with congested vehicular and pedestrian traffic while powered by hybrid technology.

Unlike light rail, the streetcar is powered by overhead wires along most of the route but switches to reserve power stored in its lithium-ion battery along some stretches. This feature was particularly attractive to Tempe, which did not want to uproot trees and destroy landscaping along Mill Avenue in order to install overhead wires.

Stantec Consulting Services, which designed other streetcar projects in the U.S., designed this project.

Four vehicles will be on the system at a time, running at 12- to 15-minute intervals, according to Phipps.

Tempe’s is the first modern streetcar line in the Valley, connecting riders to the city’s historic neighborhoods, businesses, and arts and cultural destinations.

Planners envision the streetcar attracting new riders, increasing mobility, strengthening existing neighborhoods and creating sustainable development. It could positively impact housing values near the line as it not only connects to downtown attractions but also to Valley Metro Light Rail to downtown Phoenix and downtown Mesa.

“We anticipate all kinds of people using this,” Phipps said. “Students at ASU, employees at Marina Heights, people coming to Tempe from other parts of the Valley for arts or cultural events, people traveling from Sky Harbor can use light rail and then connect to the streetcar in Tempe.

“Certainly, it is designed for those shorter trips within the city because it has more-frequent stops. It’s more of a connector between our different transit systems in the Valley.”

The route starts on Rio Salado Parkway at the massive Marina Heights development that houses State Farm, and then heads west to Ash Avenue, south on Ash to University Drive, east to Mill Avenue, continuing south on Mill to Apache Blvd., then turning east to the Dorsey/Apache Light Rail Station. On its return trip to Marina Heights, the route goes north on Mill Avenue to Rio Salado Parkway.

The cost, to be paid with a mix of federal, regional and local funds, has been controversial from the start. Tempe will pay the estimated annual operating and maintenance cost of $3.1 million. Some critics suggested that it would be less expensive to add buses that run on compressed natural gas.

“Roadways downtown are pretty much near capacity,” Phipps said. “The streetcar can transport more people more efficiently. Knowing we have traffic as an issue, efficiency is consideration. Adding in more buses wouldn’t necessarily solve the problem. We need to move more people more quickly. Thinking toward the future, as Tempe continues to grow and there is still-more travel demand, it’s really about serving the community there and anticipating what the future’s going to bring.

“This system gets cars off the street, at least that’s certainly what we anticipate.”

Mining ready to move with the green Energy – Herald Review

Off California, sea otters feast and play a part in climate change battle

Off California, sea otters feast and play a part in climate change battle