TIME MAY BE running out for President Rodrigo R. Duterte to implement the remaining economic reforms, as some key priority measures have yet to be passed by Congress less than a year before he steps down.

Congress resumes its final regular session today (July 26), in time for Mr. Duterte’s final State of the Nation Address (SONA) against the backdrop of the economy’s sluggish recovery and a rise in coronavirus cases with the more contagious Delta variant.

Add to that Fitch Ratings’ recent revision of its outlook on the Philippines’ sovereign rating to “negative,” which means the country’s hard-earned investment grade rating could be downgraded in the next 12-18 months. 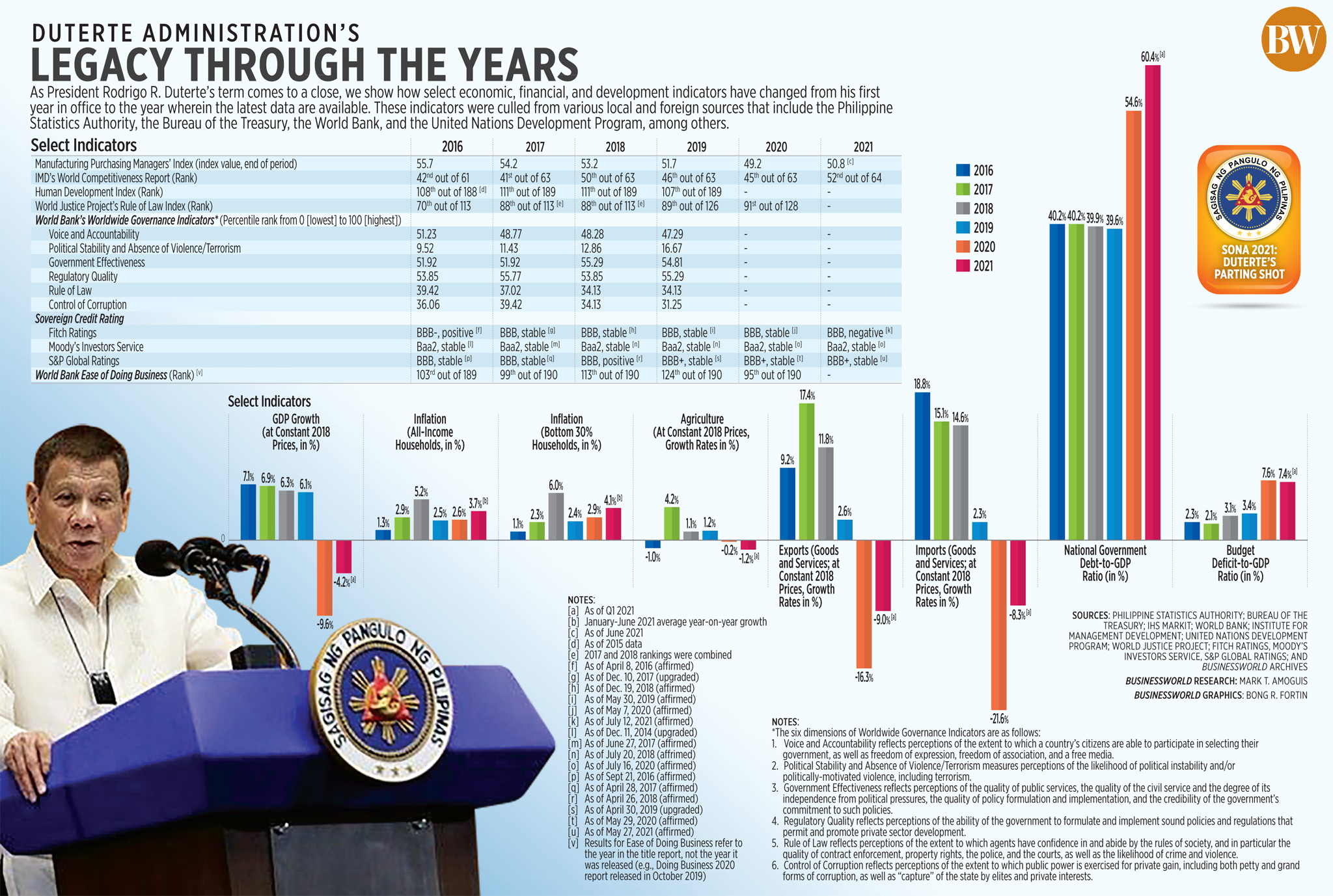 According to credit raters and experts, Mr. Duterte needs to urgently push for the legislation of much-needed economic reforms that would help the Philippines recover faster from the pandemic and attract more investments.

The passage of laws amending the Public Service Act (PSA), the Retail Trade Liberalization Act (RTLA), and the Foreign Investment Act (FIA) will be key to driving investments into the Philippines, said Christian de Guzman, senior vice-president of Sovereign Risk Group at Moody’s.

The three measures are aimed at easing restrictions on foreign ownership on some sectors. The bills amending the PSA and the FIA are still pending at the Senate, while a Bicameral Conference Committee has yet to finalize the version of the RTLA amendments.

Still, there are worries that Congress will not have enough time to pass these economic bills as lawmakers will also focus on the proposed 2022 national budget, the ongoing pandemic, and their reelection plans.

“It remains to be seen whether such reforms can be passed and subsequently signed into law given the limited amount of time left in the legislative calendar and, simultaneously, the attention required of lawmakers by issues related to the broader pandemic,” Mr. De Guzman said in an e-mail.

The Philippine economy has suffered due to the pandemic, shrinking by a record 9.6% in 2020.

In the first quarter, gross domestic product (GDP) contracted by 4.2%. Among economic components, investment represented as capital formation saw the steepest decline at 18.3% in the January to March period.

Still, government officials are hopeful of the economy’s rebound with GDP expected to grow by 6-7% this year and by 7-9% in 2022.

“Beyond any particular measure or reform related to improving the investment climate, the ability of the government to address the immediate pandemic situation, lowering infections, improving vaccination coverage and opening up the economy will have the greatest influence in terms of facilitating fiscal consolidation and restoring growth,” Mr. De Guzman said.

The filing of certificates of candidacy is set in October, although candidates typically begin their campaign months ahead.

“Fiscal disbursement delays are also a threat given fiscal stimulus remains vital to helping the domestic recovery,” Mr. Langham said in an e-mail.

“There is very little time left to establish game-changing reforms but nothing is impossible for those who have strong political resolve to get things done,” Mr. Guinigundo said in a Zoom interview.

To drive economic recovery, the government needs to generate more revenues through tax reform to support the higher spending due to the pandemic, he added.

Last year, the fiscal deficit ballooned to 7.5% of GDP from 3.4% of GDP in 2019 as the government spent more for its pandemic response, while revenues slumped due to the economic slowdown.

This year, the budget gap is expected to increase to 9.3% of GDP or P1.856 trillion. The government is eyeing to borrow P3 trillion from domestic and external sources to plug the deficit.

“It is easier to just borrow here or abroad but a more sophisticated approach to it is to be able to design, pass through Congress, and implement a better, more efficient, more simplified tax system that will bring in more revenues to the government without so much hitting both corporate income and tax payers,” Mr. Guinigundo said.

The former BSP official said legislators should also prioritize the bill that will establish a fiscal regime for the mining industry. This measure is still pending in the House of Representatives.

Mr. Guinigundo said Congress should also focus on the remaining tax reform packages — the proposed Real Property Valuation and Assessment Reform Act and the Passive Income and Financial Intermediary Taxation Act. Both are pending at the Senate committee level.

“[The tax reform measures] will also help attract foreign and even domestic investors because the tax regime will be simpler, fairer, and there will be greater efficiency in the taxation and collection,” Mr. Guinigundo said.

The government should continue to ramp up spending for infrastructure projects, particularly in healthcare facilities that were put to the test during the pandemic.

Mr. Guinigundo noted that spending for infrastructure rose during the current administration, averaging 5.1% of the country’s yearly GDP from 2016 to 2019. Mr. Duterte assumed office mid-2016.

To compare, infrastructure spending accounted for an average of 2.5% of GDP during President Benigno S.C. Aquino III’s term, and an average 1.5% of GDP between 2001 to 2010 under President Gloria Macapagal-Arroyo’s administration.

“Depending on their priority, I think they (the government) should focus on what could be completed and those with greatest multiplier effects. I think they should concentrate on transport and mobility. It offers great potential for productivity increase,” he said, noting that most projects will likely be unfinished by the end of the Duterte administration and should be prioritized by the next administration.

For Asian Institute of Management economist John Paolo R. Rivera, there is still need for a stimulus package like Bayanihan III that would provide direct subsidies to households affected by the pandemic.

“The ‘Build, Build, Build’ alone cannot justify a significant growth rate because it’s just the government mostly spending for construction, it will be a half-baked growth,” he said in a Zoom interview.

Under House Bill 9411, P108 billion out of the P400-billion stimulus package will be given as a cash assistance program that will disburse P2,000 for all Filipinos.

Household spending which makes up around three-fourths of GDP was still down by 4.8% in the first quarter.

RETURN TO GROWTH
The coronavirus pandemic ended 21 years or 84 straight quarters of Philippine economic growth, which was among the fastest in Asia.

For the remainder of his term, Mr. Duterte should focus on reforms and policies that would help the Philippines return to its pre-pandemic growth rates, experts said.

“An inability to restore previously high rates of growth relative to similarly rated countries could denote a degree of economic scarring that suggests a lower assessment of economic strength. At the same time, the persistence of wide fiscal deficits could lead to even higher debt and hamper the ability of the government to respond to future shocks,” Moody’s Mr. De Guzman said.

Moody’s last affirmed its “Baa2” rating with a “stable” outlook for the Philippines in July 2020.

For Mr. Guinigundo: “We are building for our people, for the next generation. Whoever gets the credit is immaterial so finish what can be finished.”

How do climate scientists study the causes of climate change?

How do climate scientists study the causes of climate change?