In biology, there is a rule of thumb that upholds food webs: the 10% rule, meaning animals are generally good at converting energy from their food into body weight at a rate of about 10%.

For example, a cow might eat 100 pounds of grass, but only grows by 10 pounds. This rule sustains life on Earth and determines the pyramidal structure of the food chain. However, new research shows that plastic pollution and warming oceans could threaten to upend this rule, possibly creating unwelcome consequences for marine species as well as the global food supply.

Researchers on the study, published in January in the Proceedings of the Royal Society, studied zebrafish in the lab and determined that warmer water and bisphenol-A (BPA) — a chemical used in many plastics — together make fish metabolisms less efficient at converting food into energy and body weight.

In the study, zebrafish exposed to these two stressors needed more energy to grow and reached a much smaller size at adulthood than their counterparts who had not been exposed.

The global food web “depends on a certain rate of energy from one level being transferred to the next. If you disrupt that, you can disrupt whole ecosystems,” Frank Seebacher, an author on the study and a professor of biology at the University of Sydney, told EHN.

BPA, one of the most abundantly used plastic additives in the world, affects fish — and human — endocrine systems by disrupting the ability of hormones to signal important body processes like growth and development. BPA contaminates fish via plastic pollution in the ocean and through plastic materials used in aquaculture (fish farming operations). While BPA is a prevalent endocrine-disrupting chemical, others are present in plastics, too, like phthalates and polyfluoroalkyl substances (PFAS). Such chemicals have been shown to affect fish growth on their own.

Research shows that fish hormones and endocrine systems are also impacted by temperature: in warmer water, fish metabolisms speed up, making the energetic cost of growth much higher. Both warming and endocrine-disrupting chemicals impact fish growth and development, making fish less efficient at converting their food into biomass. When fish are exposed to both at once, said the researchers, the problem is worse, and could lead to population-level impacts.

While the study was done on zebrafish within the lab, changes in fish size have already been observed in the wild, said Nicholas Wu, an author on the study and a PhD student at Western Sydney University in Australia.

“This is a growing problem,” he told EHN.

Less efficient fish metabolisms spell trouble for marine ecosystems — especially those animals at the top levels of the food chain, the researchers said. Smaller fish at lower levels of the food chain mean that there’s less food to go around, which could cause a decrease in populations of animals like sharks, whales, or other large predators.

Additionally, said Seebacher, when prey fish are found at lower numbers — and therefore are spread further apart in the water — predators like sharks and whales must spend more time and energy searching for food. That can be stressful for the animals and threatens their populations as well.

Wu also said that fish are not the only marine organisms for which this is a problem; the metabolisms of some crustaceans, plankton, aquatic insects, and marine mammals have also been shown in other studies to be sensitive to endocrine-disrupting chemicals from plastic pollution. These chemicals disrupt processes critical to the survival of these organisms, like body size, development, and reproduction.

After determining that warming water and plastic pollution disrupted fish growth, researchers created maps to identify “problem areas,” or areas of the world with many fisheries, high levels of plastic pollution, and faster-than-average ocean warming.

They determined that, under the RCP 8.5 warming scenario (one commonly used climate model that assumes rising emissions continuing through the 21st century), many fisheries in southeast Asia, Central America, and equatorial Africa would be at high risk of changes in fish growth within the next hundred years. 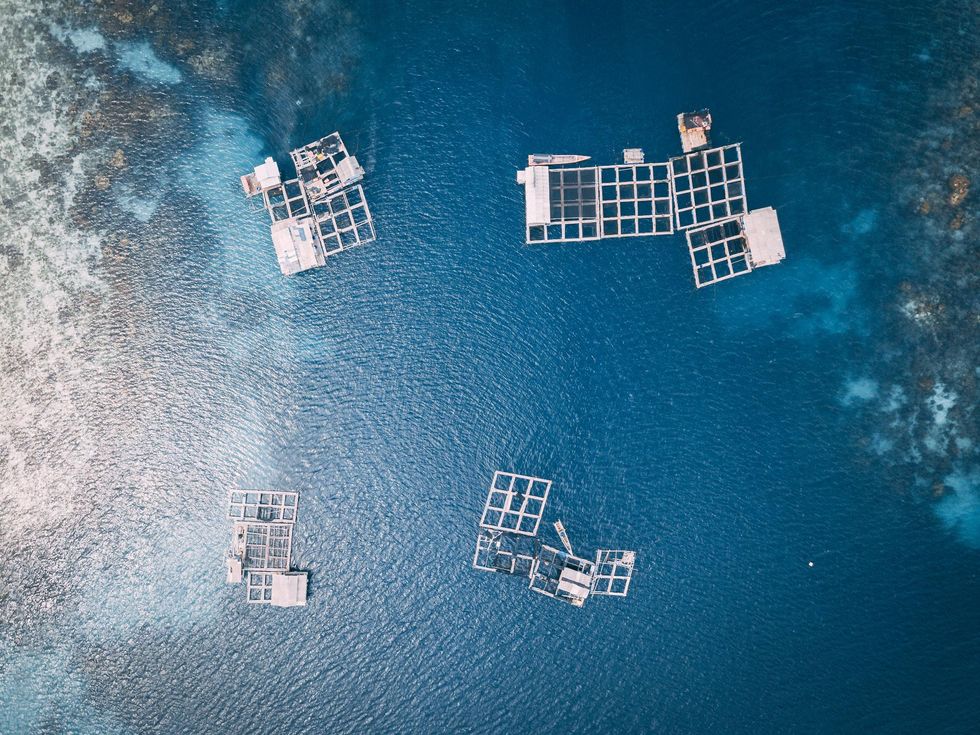 Fishing nets. Some areas of the world with extremely warm waters and high levels of pollution may need to stop fishing for human consumption altogether, said Seebacher. (Credit: Hanson Lu/Unsplash)

This wouldn’t just impact marine fisheries: As a result of this growth effect, said the researchers, aquaculturists who grow fish for human food production may have to spend more money on feeding their fish for the same quantity of fish harvested. Predatory fish like tuna, salmon, and marlin all require other fish as food — if those other fish are smaller and less abundant, it becomes less efficient and more expensive to grow predatory fish for human consumption.

According to the Food and Agriculture Organization of the United Nations, fish provide, on average, 7% of the protein in a person’s diet; for 3.3 billion people, however, fish provide more than 20% of the protein they eat. Global demand for fish as food is expected to rise, making it even more critical for those managing fisheries to attend to warming and plastic pollution concerns.

Seebacher said he hopes that the findings of this research will inform management strategies for fisheries, possibly leading to an adjustment in fish quotas to help combat the potential decline in fish abundance. Aquaculturists, he said, could benefit from replacing materials containing BPA that are used in their aquaculture ponds, such as plastic tubing, liners, or containers.

The problem of marine plastic pollution is only getting worse: according to one 2020 study, 11% of all plastic waste produced enters aquatic ecosystems, and global waste management systems likely will not be able to keep up as the amount of plastic produced each year continues to rise.

Some areas of the world with extremely warm waters and high levels of pollution may need to stop fishing for human consumption altogether, said Seebacher.

“The results were really quite an eye opener,” he said. “This could have really important implications.”

From Your Site Articles

Related Articles Around the Web