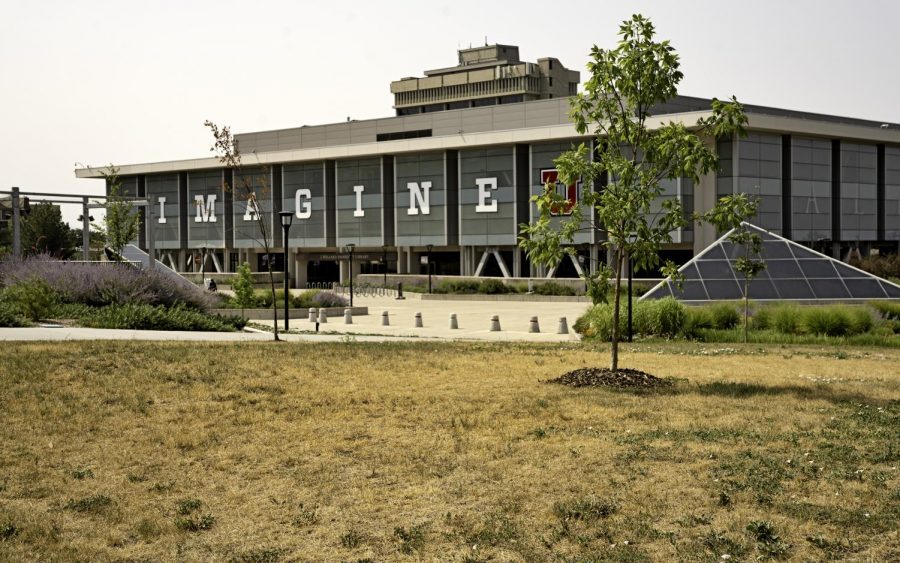 The drought’s effect on campus with view towards the Marriott Library on July, 24 2021. (Photo by Kevin Cody | The Daily Utah Chronicle)

Utahns have grown increasingly aware of the disastrous implications of the state’s ongoing drought, including the looming threat to the Great Salt Lake. But concerns are largely met with inaction from the state government. Gov. Spencer Cox’s plea to pray for rain in June 2021 garnered criticism from anyone looking for substantial action. Efforts to conserve water are a big focus for the 2022 Utah Legislative session.

The community’s passion for preserving the Great Salt Lake and minimizing impacts of the drought need to be reflected in the Utah State Legislature. Beyond water conservation, the legislature must begin paving the way for Utah to focus on mitigating climate change through renewable energy.

Gov. Cox declared a state of emergency in March 2021 when 90% of the state was experiencing extreme drought. He called on Utahns to conserve water individually, and they got the message. Salt Lake City and Sandy City saved 2.8 billion gallons of water in 2021 compared to last year. Jordan Valley Water Conservancy District’s water deliveries were down nearly 31% in August 2021 compared to August 2020.

After witnessing the apathy for the health and well-being of others during the pandemic, I felt skeptical that the community would care about Utah’s drought. I assumed people would complain about the government’s inaction until it required individual sacrifice. But our community proved willing to put in the effort.

The community clearly recognizes the importance of conserving water, but only 4% of Utah water is used for indoor residential purposes. 82% goes to farms and ranches. House Speaker Brad Wilson agrees conservation efforts alone are not enough. Optimizing agricultural water usage will be far more beneficial.

The legislature deserves some credit for drafting multiple bills that will help Utah to optimize its water allocation. House Bill 33 would promote Utah agriculture to use instream flows, which conserve water. Senate Bill 89 would require water providers to adopt water conservation goals, and H.B. 157 aims to provide long-term funding to the Great Salt Lake. If passed, these bills will positively benefit Utah’s reservoirs and environment.

However, Cox’s 2023 budget proposal suggests that the strategies to combat the drought could do more harm than good. The budget includes an almost half-billion dollar investment towards water infrastructure, planning and management. When Cox unveiled the budget, he emphasized the importance of water development projects such as the the Bear River Project. This project aims to divert the Bear River from the Great Salt Lake, effectively drying the lake and threatening Utah’s economy, ecosystems and health.

However, despite public outcry, the legislature’s continued consideration shows that they have plenty of room for improvement.

Our legislature’s focus on agricultural water conservation would yield better results than asking the community to take shorter showers, but it still doesn’t address a long-term solution. 95% of Utah’s water supply comes from snowfall. Utah’s latest drought update lists overall statewide storage at 52% capacity. This time in 2021, reservoirs were at 62% capacity. The Great Salt Lake is currently 11 feet below what it should be. If our snowfall continues to drop at the current rate, no amount of individual water conservation will save us. Even optimizing agriculture’s use of water doesn’t get to the root of the problem: climate change.

Cox’s budget plan didn’t mention investing in renewable energy or sustainable agriculture. The legislature isn’t focused on minimizing carbon emissions either. Although a new resolution, H.C.R. 1, recognizes climate change as a threat, it also paves the way for Utah lawmakers to continue prioritizing the fossil fuel industry over the environment. The resolution promotes carbon sequestration, which entails capturing and storing carbon dioxide to prevent it from harming the atmosphere, which some environmentalist groups claim prolongs dependence on fossil fuels.

Utah’s ongoing drought is climate change manifesting itself in a very tangible way. Every year that our government mishandles climate change is another year of record-low snowfalls.

Keeping Up the Momentum

Utah citizens rank climate change as a growing concern. Fifty-nine percent of Utahns support gradually transitioning to renewable energy, according to a Colorado College poll from 2021. I’d like to see the legislature start to reflect that. Until then, I remain skeptical that their efforts will have real payoff.

Without the community’s response in reducing water usage and strong support for saving the Great Salt Lake, the Utah State Legislature may not have received the message. Utahns must reflect on the needs of their communities and communicate that to their representatives. In response to the drought, let’s keep the momentum and implement ways that our community can live more sustainably.