Anyone over 40 is likely to remember old-school drinking fountains — the porcelain and chrome fixtures dotted school hallways and gym foyers everywhere. Students had to put their faces uncomfortably close to what wasn’t always a clean surface just to get a sip of warm water. Those days are gone.

Water refill stations, also known as hydration stations, are a sophisticated upgrade. They dispense cool water through a high-grade filter. Each one represents a significant investment. The installed units can cost upwards of $2,000. A filter change is $80 plus labor. 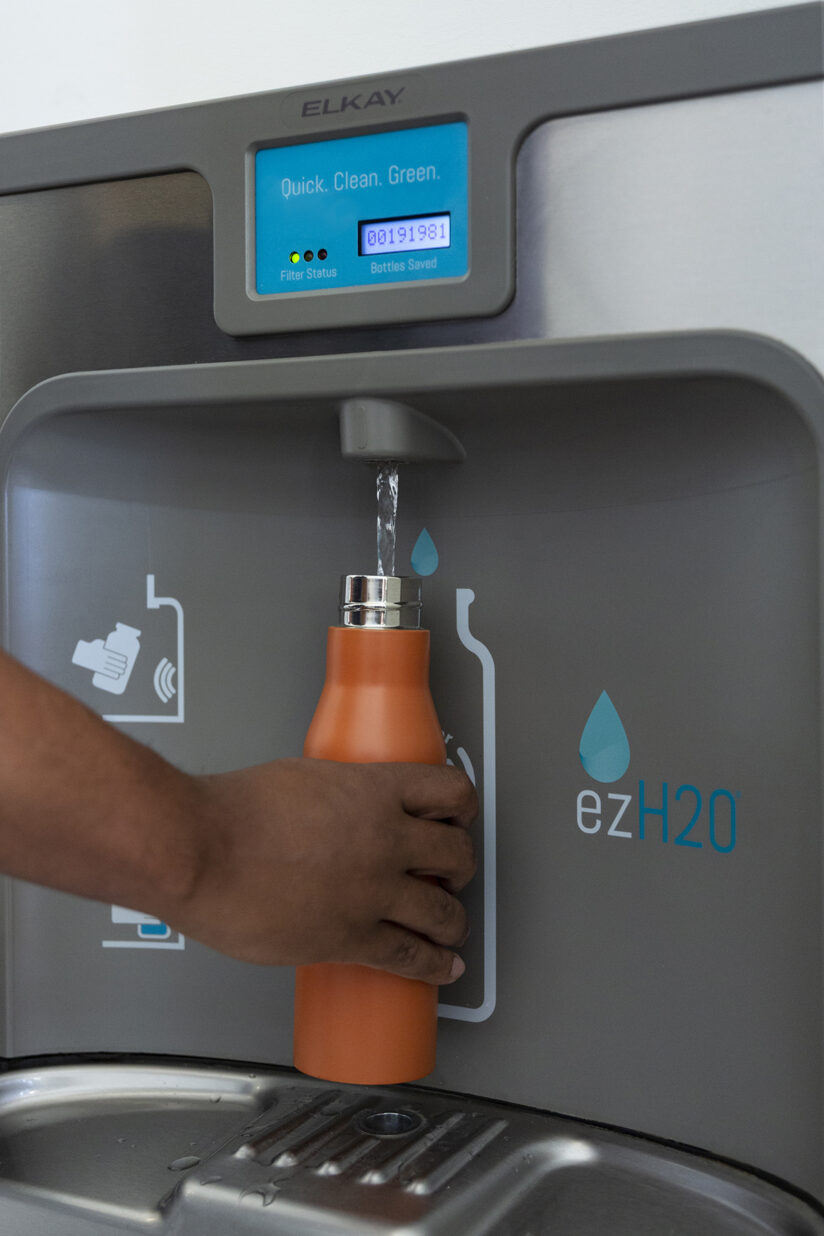 Water refill stations are located throughout the university, including this one at USC Village. (USC Photo/Hues Tran)

Every unit has a counter keeping track of fill-ups. USC zero waste auditors Nick Belgrave and Josh Rebello began checking counters in November. That’s no small feat: There are 172 water refill stations on the University Park Campus, 32 more at the Health Sciences Campus. The Los Angeles Memorial Coliseum has 60 more, but the venue’s staff take care of those.

“We’re setting the foundation for the sustainability effort here at USC,” said Belgrave, a New York native who veered away from the music business toward sustainability. “It’s actually fulfilling to be at ground level and set that first stone in the wall.”

The checks take legwork, but they’re quick. Belgrave eyeballs the counter, Rebello records it on a mobile device. They flag broken stations and move on.

So how many plastic bottles, exactly, are spared? At this point, it’s hard to tell. Some of the counters are like a car’s odometer in that they haven’t been touched since they were new. Other counters have been reset. Some stations count 20-ounce refills; others including those in USC Housing count 16 ounces. A heavily used building is bound to pump out more refills than a quiet space far from the campus center.

Still, the counts are encouraging. Amid treadmills and weights, three stations at the Lyon Center are tapped continually to refill sweaty containers. Serving up 20 ounces per container, they save 121 plastic bottles a day. USC Housing has a wider survey of 85 stations, measuring 16 ounces per bottle. Those stations averaged 67 bottles saved over a four-month period late last year.

Reducing the use of troublesome plastic bottles

Belgrave sees hope even in a world where, in a few minutes, a sparkly beverage becomes plastic waste. That waste, which can contaminate marine environments, also sucks up fossil fuel power to produce which magnifies its carbon footprint.

Plastic isn’t made cleanly. It takes a lot of chemicals, and it’s not a healthy process.

“Plastic isn’t made cleanly,” said Belgrave, who also examines campus compost and recycling stations. “It takes a lot of chemicals, and it’s not a healthy process. I don’t see too many single-use water bottles around campus, and the kids are pretty good about carrying their own.”

USC is determined to be carbon neutral by 2025, and the university has upped its recycling game and bins the past few years with upgraded recycling and composting stations. Recycling, though, is an end-of-the-line tactic. Water refill stations cut the need for plastic bottles to be made in the first place, cleaning upstream and taking a sustainability step that counts.

Gas stoves leak climate-warming methane even when they’re off

Gas stoves leak climate-warming methane even when they're off